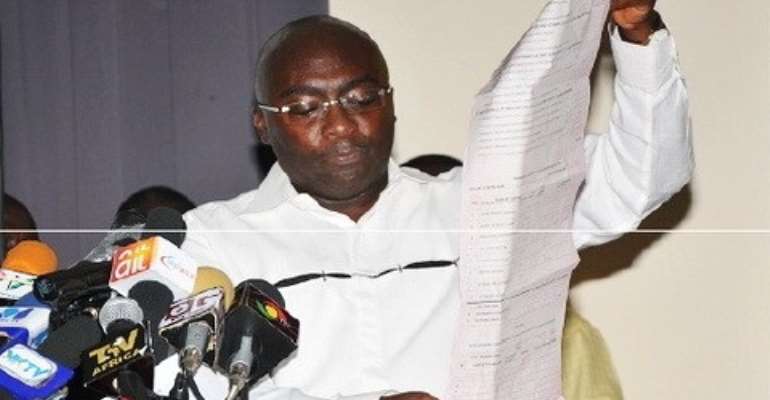 Nobody in Ghana thought that Dr Mahamadu Bawumia and the NPP who have been blabbing that they have a solid proof case which would turn the 2012 Presidential Election in their favour will crack so soon under the first dose of cross-examination.

I said in another article that presenting evidence in court is far less burdensome than being put on a microscopic cross-examination by a team of lawyers to prove your case.

But Bawumia who may have slept on the wrong side of his bed did not know what was in store for him after the presentation of his so-called evidence. Tony Lithur, the lead counsel representing President John Mahama, the first respondent in the electoral petition immediately jumped on Bawumia by putting out multiple pink results sheets from different polling stations which Bawumia and his team have duplicated in different categories to buttress their alleged electoral malpractices.

Dr Bawumia's body language suddenly changed and so were all the leading lawyers backing the NPP as they were forced each time to concede that they have duplicated different categories of pink results sheets to back their alleged electoral malpractices.

I don't want to be Bawumia burning under the load of questions from Tony Lithur. And I bet you also would not want to be him. Bawumia never expected to be put on the defensive so soon on duplications of pink results sheets. And the way the NPP supporters in court became so subdued and pensive was very telling.

Meanwhile the proper cross-examination has not even started, making Bawumia situation very precarious. Because other lawyers of the two other respondents are bound to jump on him very hard.

Dr Bawumia took the biggest gamble in his life by agreeing to be the chief witness whilst Akufo-Addo who claims to be a high flying lawyer just sits in court watching. The case just started but if what we saw on Thursday April 18 is anything to go by, then Bawumia has a long mountain to climb.

And by the time the respondents are done with him, he will be a walking skeleton with nothing to brag about.