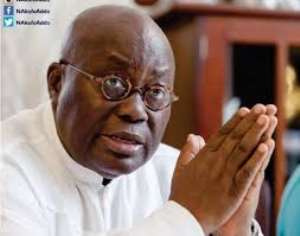 They claim that Nana Addo Dankwa Akufo-Addo, NPP’s Serial Presidential Candidate, is one of Ghana’s finest lawyers. I don’t have a problem with that assertion. And they add that Akufo-Addo knows the laws of Ghana inside out. That is their business. But if those claims were not to be taken with, a pinch of salt, then one would have to believe that Akufo-Addo has read and understood Ghana’s 1992 Constitution in its entirety.

On the campaign trail towards the December 7 General Elections, Akufo-Addo has been blabbing that if elected as Ghana’s next President, he will appoint a Special Public Prosecutor within six months to investigate and jail perceived NDC corrupt officials. Nana Addo has said it multiple times amidst applause from NPP supporters. And to give leg to the appointment of this so-called Special Public Prosecutor who we all know is going to do nothing but witch-hunting if the NPP gains political power, Akufo-Addo slotted this in his manifesto, which was launched on Sunday October 9, 2016.

But unbeknown to Ghanaians, Akufo-Addo does not read. In fact, he’s not the smartest lawyer or politician that the NPP would want Ghanaians and the world to believe about this “Sleeping Presidential Candidate”. Article 88 clause (3) explicitly states that the, “Attorney General shall be responsible for the initiation and conduct of all prosecutions of criminal offences”. It is important for readers to know that Article 88, which is part of Chapter 8 on the Executive also has clause (4), which states that, “All offences prosecuted in the name of the Republic of Ghana shall be at the suit of the Attorney-General or any other person authorised by him in accordance with any law”.

To amend article 88 of the Constitution, which is an entrenched provision four major things have to be accomplished. They are:

Therefore, if Akufo-Addo, who perhaps does not know what he’s talking about or probably does not know what entails in the Constitution comes to your constituency to lie to you that he’s going to appoint a Special Public Prosecutor in six-months, simply know that it is purely a political talk and pure lies. It is not feasible within six-months. If even such appointment is fast-tracked, it will take at least one year and definitely not within six months.

Akufo-Addo who is behaving like a dying horse and therefore goes about saying anything just to get elected, has no clue of some of the things he says, thinking no one would have the time to cross-check some of the garbage he spews out.

For the past six weeks, Akufo-Addo who continues to fall sick has concentrated his campaign in Accra alone. He has not even ventured into certain key districts or constituencies of the Greater Accra Region. He seems to be running as Accra Mayor and not the President of Ghana.

Akufo-Addo’s spirit is willing but his body cannot respond to the full rigours of political campaign, so he gets up and goes to greet chiefs and people who are his noted supporters in Accra.

For six weeks now, Akufo-Addo has not gone to any of the nine remaining regions of Ghana to campaign. Now Ghanaians are learning that Akufo-Addo does not have any intention of changing this porous campaign style until election day. The simply reason is that apart from not having the resources, Akufo-Addo cannot function properly after just one hour on the campaign trail.

That is why the NPP is lying to Ghanaians that since they want to win the Greater Accra Region at all cost, Akufo-Addo will remain on the campaign trail mostly in the Greater Accra until Election Day. Ghanaians may ask, why neglect the other nine regions including the Ashanti and the Eastern?

To date Akufo-Addo has not been able to appear before the so-called, “Evening Encounter with Ghanaians”, which was organized by the Institute of Economic Affairs (IEA) for other presidential candidates excluding President Mahama. It has been postponement after postponement and it does not look like Akufo-Addo would be able to drag himself there.

Akufo-Addo is just hanging by the straw thinking his rope-a-dope style and the lies being spewed by NPP operatives who have captured the Ghanaian media, and write and plant their own stories in newspapers and on the web to throw dust into the eyes of Ghanaians, will get him to the finishing line come December 7.

It is time Akufo-Addo and the NPP get real with Ghanaians, because their lies are failing to catch up with Ghanaians, who are seeing electricity, chip compounds, hospitals, clinics, schools, roads, water, new markets and lorry stations among others. Many Ghanaians are reading what they hear daily in the media as pure propaganda and you don’t win elections when you sit in Accra and believe that what you spew on radio and television spills down to the ordinary man on the street in the other regions.