Rev. Owusu Bempah Has Diluted The Role Of God 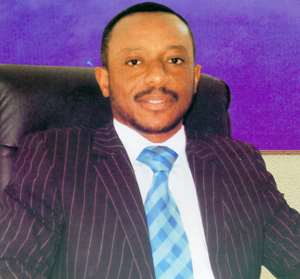 We are being forced as a nation by a man who claims to speak directly and daily to God to falsely believe that the sole purpose of God for Ghana today, is to see Nana Addo Dankwa Akufo-Addo, the NPP’s Presidential Candidate, win the December 7 Elections. Interestingly, Akufo-Addo is not even a Christian and attends the Ridge Church in Accra sparingly. Akufo-Addo only visits churches to canvass for political votes. Period! Yet, he is being paraded as a “saviour” designated and anointed by God to save Ghana.

Rev. Isaac Owusu Bempah, founder and leader of Glorious Word Ministry International, keeps jumping from one radio station to another, prophesying that God has spiritually declared Akufo-Addo the winner of the up-coming 2016 Elections. Owusu Bempah however adds a fine line that what is left, is for the NPP folks to pray hard before his prophesy manifests physically. Very interesting comments by Owusu Bempah. In these interesting times.

Owusu Bempah does not stop there. He sternly warns the Electoral Commission Chair, Mrs Charlotte Osei that if she attempts to rig the elections, God will strike her and that God has rejected President Mahama. Let’s see, which God Owusu Bempah is talking about!

First off, God is apolitical. Of course, God listens to the prayers of his children including politicians when they pray to him for success in any venture. But the way Owusu Bempah roams around daily with only one-message smacks of deceit. Owusu Bempah has firmly placed God in the centre of the 2016 Elections and to Bempah it’s a done deal for Akufo-Addo. Akufo-Addo will win. Says Bempah. Just remember this!

One question that keeps bouncing off my head is why will God concentrate all His energies solely on Akufo-Addo to be president at all cost? Why has Owusu Bempah become so obsessed with the up-coming elections that he seems to have nothing else to do except to talk about the elections and give false information.

Owusu Bempah claims there is blood on the hands of President Mahama, which is why God has rejected him. But interestingly, that same God who saw blood on the hands of Mahama did not see the filthy bloody hands of Akufo-Addo, a man who many in Ghana see as the most violent, dishonest, divisive, petty, arrogant and non-God fearing politician.

Many Ghanaians know about Akufo-Addo’s younger sister. Her name is Golda Akufo-Addo and those very close to her used to call her Mamaa. Golda was not happy with the reckless way Akufo-Addo kept selling the family properties to fund his mirage political ambition. This led to an open confrontation between Golda and Nana Akufo-Addo. Mamaa has since vanished! To date no one knows her whereabouts and there are wild rumours making rounds that Mamaa has been “eliminated” and that Nana Akufo-Addo is behind this.

The God that we worship is a truthful God. He knows the hearts and minds of all of us, including Owusu Bempah. That is why many people including me do not believe the junk Owusu Bempah keeps spewing around.

For those who don’t know Owusu Bempah very well, he is currently married to his third wife. Third wife? The answer is yes. The two former wives were not good enough so Owusu Bempah got rid of them for his current one. How can Owusu Bempah tell Ghanaians that the two women he previously married were bad and that he is the good one? How can Owusu Bempah who marries people in his church and admonishes them to stick in their marriages if things were not going well, tell Ghanaians that he could not stick into his own two previous marriages because he is a different kind of person or because he is a “prophet”? Indeed, God is not double-faced.

Owusu Bempah loves flashy cars. He lives very big on the tithes and offertory of his church members, and he does not shy from showing his collection of glitzy cars to people. It was Owusu Bempah’s love for gaudy cars that got him into serious trouble with the law during Rawlings’ regime.

For those who don’t know and those who may have forgotten, there was once a car stealing syndicate operating from Europe that stole and shipped expensive cars to Ghana. And Owusu Bempah got involved with this car stealing syndicate. Owusu Bempah bought some of these cars and investigations led to his arrest. Those who don’t believe this story should check with the Police Headquarters. Owusu Bempah was arrested but luckily he weaselled himself out, but this did not erase the fact that he is a dubious person.

God is not to be mocked! We have to take Him very serious and for His word. There is no way God will let a violent person like Akufo-Addo, who leads a violent party like the NPP, with a violent gang who do not tolerate any dissenting view to be marked as the next leader of Ghana. This is definitely not the God that I worship. My God, hates violence and He will never let Ghana to suffer at the gain of Akufo-Addo.

God loves people with pure hearts. Hearts that is free from deceit, pettiness, evil thoughts, evil plans, divisiveness, violence, murderous thoughts, and many others. When Akufo-Addo, is therefore weighed on the scale of God, he definitely does not make it. This then is not the kind of leader God wants to thrust on Ghanaians.

Bagbin fly to Dubai for medical review after budget rejectio...
11 hours ago