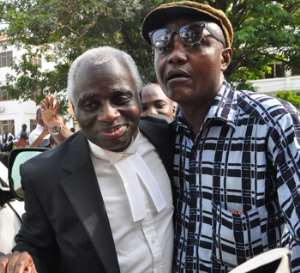 Their destination was Accra but the exact venue remained unknown to most of these adventure-seekers who were hoodwinked to board articulated trucks and carted like cattle to an abattoir. In their forlorn imagination, they saw the Jubilee/Flagstaff House as the ultimate destination of the journey to meet with a supposed 'President' but they were tipped and grounded far from the compound-named seat of government and also at some distance away from the Supreme Court where they were slated to be.

Others arrived, tightly packed like sardines in buses and disgorged close to the Supreme Court car park. Smelling rank in visibly stained dirty shirts soaked in osmidrosis, they were gathered and assembled in front of the portals of the Supreme Court where they began to feel feverishly very odd in their appearance as they caught glimpses of the smartly dressed Court workers who were tickling into the 1876-built magnificent building.

In their gaucherie, they began to feel their misplaced presence and scaled themselves momentarily. There and then they began to realise that their dirty dusty feet, worn-out heels were inappropriate for where they were. Upon examining themselves further, their sub-conscience whispered in their ears that they were ill-dressed either in 'Charlie-wote' slippers or padded dusty oversized shoes that made them look awkward irrespective of the weight of the matter that had brought them there.

Others who carried their borrowed undersized shoes in their hands because they could not stand to bear how much they were biting their feet which exposed their heavily cracked heels felt the need to withdraw to the background.

These were men in shoes without socks, unwashed men and women looking unkempt/un-plaited and undressed hair, men and women cobbled together for a mischievous mission who began to smell their own smelly body and clothes as the sweet fragrance of the eminent lawyers and Court officials would occasionally pervade the air when passed by, tickling into the building one by one, some looking and feeling confident whiles others arrived already crestfallen and feeling defeated until it was realised that Tsatsu was conspicuously absent from the arriving legal magnates to the Court.

At various strategic locations around the Supreme Court was something quite unusual: the sight of stolid-looking equestrian Police in riot gear, mounted on huge sturdy-built crowd-control big fat equine beasts in excellent gait.

The look and odd appearance of the arrived careworn scallywags immediately sent signals to the intrepid door guards to be wary of some mischief intent and purpose expressed in the faces of a few of them who supposedly were the leaders whiles most of them felt bewildered and lost as to where they had come to find themselves with no smattering of knowledge of where they had been bound for, but only felt like cattle and chicken for the market. [Moses never informed Isaac the purpose for which he was made to carry the faggots meant for his own pyre as they left home until they arrived at the slaughter spot.

As they stepped back to appreciate the full size, loftiness and magnificence of the Supreme Court building, the exceptional nature and stature of people both litigants and advocates who entered into the building for business; as they came to realise their own ill rank-smelling bodies and clothes as they began to feel the sudorific heat of the morning sun occasioning profuse sweating combining halitosis from overnight travel and un-washed mouth coupled with other factors, they sensed something imminently unpleasant and quickly diminished into thin air, leaving their matter behind.

For what reason they had come to the Supreme Court can best be answered by Asiedu Nketia. Herein present were nearly 400 super-idiots who can hardly feed and clothe themselves supposed to have afforded the cost of filing and legal representation to apparently voluntarily file to be sued in the Supreme Court of all Courts, only to spend these hefty sums and disappear from Court. Why would these indigents not advise themselves to feed themselves and their families (if any) with the money so spent, buy better clothes, buy soap and wash their ill osmidrosis-smelling skin to smell better, buy toothpaste to wash their mouth and ruddy smeared teeth to look and feel socially presentable?

But did they foot the bill by themselves, looking from the fact that they were packed into cargo trucks and tipped onto the streets of Accra with nowhere even to brush off dust from their clothes let alone somewhere to paste. These are 'voluntary' respondents to a high profile suit who get stranded in hunger in the streets of Accra.

In the Supreme Court, after their Eminency the Judges had allowed counsel for the scallywags to do some lengthy circuitus verborum presentation that could be equally bad for a lecture hall for students as he couldn't justify a single point, the Judges patiently make him realise that the Supreme Court has no room for time-wasters so he was made to sit down whence he felt disengaged and fell asleep out of boredom, snoring heavily aloud and indeed drooling from sleep only to be told hours later that the session was over.

It can be subsumed from the immediacy of his slumber to his being seated that he was surely somniloquising whiles doing his delivery and presentation to the Court. Asiedu Nketia had on an earlier occasion set the pace sleeping from boredom with exudation from his eyes. Reasons for their boredom sleepiness in Court from probable oneirodynia may remain their own excuse.

The world cannot be said to be only strange, it is also a funny place because, looking at these shameless good for nothing urchins who claim to have filed voluntary joinder applications to defend a scandalous and useless administration that cannot govern, these are perceivably people who can even hardly ever identify their ego in the rest of their entire life should the governance remain the same, hence needing help with educating their children, help to establish something for them that can sustainably put bread on the table for them daily, clothe and shelter them, yet these are the people who out of poverty created by poor governance for decades under P/NDC have become gullible to evil and enslaved to lies and propaganda.

Did they know the agenda behind their dismissed joinder application? None of them who attended the supposed hearing can ever tell right from wrong. They have been misled by greedy scoundrels who take law and order, the rule of law and indeed the Supreme Court for granted.

No wonder they were strictly excluded from the Court building however when at last their Eminence the Justices invited at least one of them for a severe bashing, discretion, being the better part of valour had taught them to disappear before it was too late.

If they had had the temerity to enter the Court room to see the Eminent Judges appear from backstage in their rubicund robes and silk wigs that drop to their ribs, entering at the shout of Court rise, mounting solemnly onto their pontifical chairs in the serenity of the lofty Court room, they would have melted and soiled their pants at that spectacle alone.

In fact, in my opinion, the Court treated them with filial leniency by not slapping costs on them both for wasting the Court's time and costs to the petitioners. The Court didn't find it necessary to do so probably because they wouldn't be able to afford to pay and their sponsors wouldn't just bother, so there was no need to.

These are creatures that are fed when deemed expedient to do so by their mind controlling agents. Asiedu Nketia et al would want them to remain who they are so that he can use them for whatever they want to use them for in their own whims and caprices.

Their lawyers equally play mischief because these are supposed advocates who either are reluctant to give good counsel or cannot advise their clients as to the most likely and probable merit and consequences of their matter; all what they are interested in is their fee being paid, not realising that lack of these professional ethics earn them shame and atimy.

Tsatsu has eventually shown his clients the red card for misleading him into an unmeritorious suit however others will surely play mischievous heroism aimed at going the full length of the hearing.

They will persistently go to Court as a fiduciary duty only to be there to consume defeating legal presentation from their opponent petitioners that will surely become somnific to them, a situation that will give rise to sleeping snoring and drivelling in Court, and indeed a situation that will add more drama to the already making of a constitutional and election protest history in Africa and for all other nations to follow.