Kwame Pianim Is Corrupt To The Brain And Bone! 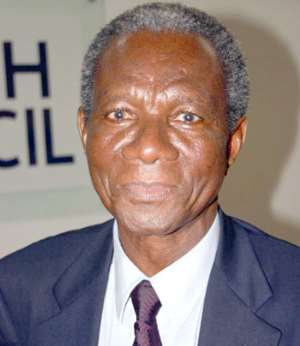 Kwame Pianim is a man who is too conflicted for his own good and that of his party and country, and thus cannot be taken seriously or we risk plunging the nation into the very sort of anarchy of which he faults both the members of the National Executive Council (NEC) of the main opposition New Patriotic Party and NPP-MPs.

Asked whether he thought the party's petition challenging the presidential legitimacy of Mr. John Dramani Mahama was peculiarly marked by the selfish interest of any individual party member or group of members, this is what the self-styled SENIOR NPP MEMBER had to say: "I don't believe that at all; indeed, we need to support the court action because to me it is good, and also because the party followers see that we are doing something" (See "NPP MPs' Walkouts Illogical - Pianim" Graphic.com/Ghanaweb.com 2/26/13).

Even more poignantly, Mr. Pianim [Appiah-Anim?] added: "People feel cheated that the sovereign will of the people have [sic] been undermined, so we need people [to petition the Supreme Court]. But we should not lose sight of what the law is, otherwise we would have anarchy."

Well, somebody ought to deafeningly drum into the ears of Mr. Pianim that the law does not countenance the sort of electoral criminality that he perfectly seems to agree was deviously and deliberately orchestrated by the Mahama-led National Democratic Congress (NDC) and the Afari-Gyan-chaired Electoral Commission (EC). And if the direct consequences of such fraud is anomie, or the complete breakdown of law and order in the country, well, then so be it!

In other words, why does Mr. Pianim seem to be so hell-bent on rewarding Mr. Mahama and his criminal accomplices for nefariously scheming to undermine democratic Ghanaian political culture? It is also rather curious for Mr. Pianim to so sneeringly impugn NPP parliamentary walkouts as patently ineffectual and also inconsequential, and then to paradoxically accuse the same NPP-MPs of edging the country towards the brink of anarchy: "It is not NPP members who legitimize the President.

A president is legitimized by the sovereign will of the people of Ghana who vote, and the Electoral Commission whom [sic] all of us have agreed to declare the winner."

Well, if Mr. Pianim clearly agrees that the "sovereign will of the people" has been criminally usurped and/or undermined, then why would he insist on the presidential legitimacy of Mr. Mahama, knowing fully well that Dr. Kwadwo Afari-Gyan, Ghana's Electoral Commissioner, flagrantly flouted the sovereign will of the people by fraudulently declaring Mr. Mahama the indisputable winner of Election 2012?

It is also not clear what he means, when Mr. Pianim sneeringly declares: "Are they going to Embassies to get visas? They (the Embassies) are accredited by the President. When a thief is attacking them in their house [sic] and they EW calling on the police.

The President is the Commander-in-Chief of the security services." What we have here is an abjectly unpardonable case of sophistry and plain ignorance. In other words, contrary to what Mr. Pianim would have his audience believe, the Presidency, as an age-old Ghanaian institution, has absolutely nothing to do with the individual citizenship or personality of the man who presently occupies the same.

He may, indeed, be Commander-in-Chief of the Ghana Armed Forces or the nation's security agencies, but Mr. Mahama has absolutely no right, whatsoever, to deviously conspire to usurp the sovereign will of the people. And, by the way, diplomatic accreditation is a "conventional" protocol subscribed to by all countries of the Geneva Convention; it is not accorded out of the generosity or discretion of Mr. Mahama.

And just how does Mr. Pianim expect any Ghanaian citizen to successfully sue in order to force NPP-MPs to abandon their righteous boycotting of parliamentary proceedings, when the very legitimacy of the man whose presidency they are boycotting has yet to be definitively determined by the Supreme Court? Indeed, what is inexcusably "dangerous for society," contrary to what Mr. Pianim would have his countrymen and women believe, is the curious notion that, somehow, the law commands all Ghanaians to unreservedly and blindly take their marching orders from a constitutional outlaw and a legally challenged personality like Mr. John Dramani Mahama.

And just precisely why would Mr. Pianim counsel the generous rewarding of criminal suspects like Mr. Mahama with obsequiousness? I thought the inviolable democratic rule of law was about crime and punishment, rather than crime and generous rewards.