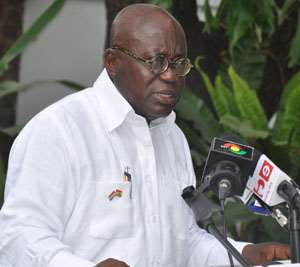 The ex-leader of the NPP, Nana Addo Dankwa Akufo-Addo, who also doubles as the twice defeated presidential candidate, and may triple as the only known politician in Ghana's history to refuse to concede defeat anytime he loses an election, is in court with jaundice of allegations concerning the 2012 Elections.

Nana Akufo-Addo rushed to the Supreme Court with loads of papers in plentyof boxes claiming that he had been robbed of presidential victory, therefore, he was going to do whatever it takes to redeem the lost victory.

Among Akufo-Addo's stack of allegations,was the so-called evidence that there were several thousands of pink results sheets that were not signed by the returning officers of the Electoral Commission (EC), therefore, the votes in those polling stations must be thrown away by the Supreme Court. Ironically, those votes form part of the 4.6 million valid votes that Akufo-Addo in his wildest of imaginations wants the Supreme Court of Ghana to throw them away in order for him to ride on to victory.

But before I proceed, I would again want Ghanaians to know that of all the pink results sheets that Akufo-Addo presented to the Supreme Court as not having been signed by the returning officers of the EC, all of them came from polling stations won by President Mahama.

This is a man who claims that he is a man of principle, therefore, he is in court to right the wrong not only for himself but future generations of the country. But what Ghanaians again need to know is that Akufo-Addo deliberately left out all those unsigned pink results sheets from all the polling stations that he won.

If Akufo-Addo is the principled person that he wants us to believe why would he do a half-baked job by only pointing accusing fingers in polling stations won by President Mahama and being silent on those that he won?

To buttress my point, I will today devote my article onjust one of those pink results sheets from the Abuakwa South Constituency which was won by Samuel Atta Akyea with Akufo-Addo garnering 29,334 (77.09%) of the presidential votes as against President Mahama's of 8,445 (22.19%).


If you take a cursory look on the pink results sheet from the Magistrate Court polling station in the Abuakwa South Constituency (Polling Code E190606), Akufo-Addo polled 268 votes against President Mahama's own of just 37 votes. But we do not even know the name of the returning officer because he did not state it on the sheet. That returning officer also did not sign the sheet but the numbers on the sheet were declared valid and added to the overall votes of each of the presidential candidates.

Now the big question is, why did the EC consider the results on that unsigned pink results sheet from the Magistrate Court in the Abuakwa South Constituency as valid? The reason is very simple: The sheet was signed by all the polling agents of the parties.

The EC law clearly states that if polling agents sign their signatures on the pink results sheets at the end of the counting of votes and for some reason/s the returning officer forgets to append his/her signature, that does not invalidate the results. The result, by law is still valid and can never be thrown away.

Another important law by the EC which Akufo-Addo is ignorant of or simply being led astray by those surrounding him has got to do with signatures by polling agents at polling stations. When votes are counted at the end of election, polling agents append their signatures at the declaration portion of the pink results sheets.

This is the basic truth and the basic law which Akufo-Addo with all his years as a lawyer and someone aspiring for the highest office of the land should have known before rushing to court. I will therefore, allay the fears of the NDC supports and rather dim the hopes of the NPP supporters that failure of a returning officer to sign a pink results sheet does not make the votes in that polling station invalid. Therefore, votes at polling stations won by President Mahama but for some reason/s the returning officers failed to append their signatures are still valid and will count.

Akufo-Addo may be reaching the dead end and the earlier he does the honourable thing by conceding defeat the better it would be for his standing in society. In fact, if the Supreme Court throws out the case based on some of these basic EC laws that Akufo-Addo is ignorant of, his supporters who have been kept in the dark for all this while will never forgive him.

Please digest this story and brainstorm with those who care to seek the truth till you hear from me again.