Africans Will Remember Gaddafi For One Important Achievement 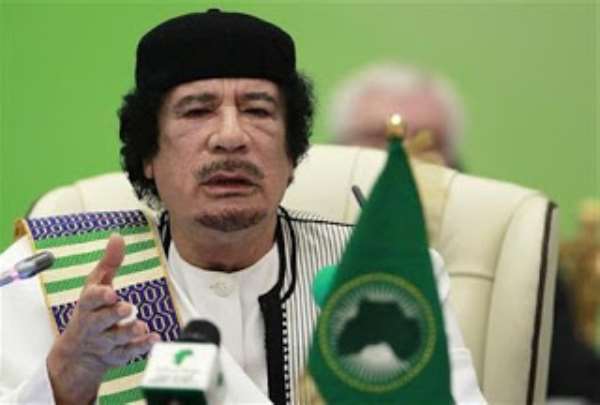 “Gaddafi's creation of the African Investment Bank in Sirte (Libya) and the African Monetary Fund to be based in Cameroon will supplant the IMF and undermine Western economic hegemony in Africa.” —Gerald Pereira, an executive board member of the former Tripoli-based World Mathaba

The good people of Africa will remember Gaddafi, for least one important thing he did: he laid a strong foundation for a viable and affordable telecommunication services across Africa at a time when Africans were completely disconnected from the world with exorbitant cost of telecommunication services. At least, for those of us who appreciate the value of communication in today's businesses, in keeping relationships and families alive and as the basis of our technological revolution, we believe Gaddafi gave to the African people, all it takes to keep up with today's modern life and to make it in the 21st century as a people.

Hate him or Like him Gaddafi is a true African hero. Don't get me wrong. I am not by any means suggesting that Gaddafi was a saint. He was a human being and like any human (yourselves and myself included), he had his shortfalls. The same thing can be said about Kwame Nkrumah, and many other great revolutionaries who ever lived in human history.

We are dully aware of countless of Gaddafi's shortfalls. But we cannot allow this to blindfold us completely to many of his kind gestures and the positive implications such gestures is currently having on the live of the entire African continent in our modern technological revolution.

In case you didn't know it was Gaddafi's Libya that offered all of Africa its first revolution in modern times – connecting the entire continent by telephone, television, radio broadcasting and several other technological applications such as telemedicine and distance teaching. And thanks to the WMAX radio bridge, a low cost connection was made available across the continent, including in rural areas. Because of this, Africans of today can also watch TV in HD (high definition), communicate with people anywhere in the world with high tech telecommunication satellites, browse at a reduced price,whiles enjoying the services of modern telecommunication devices at a highly reduced price.

It is an established fact that, before Gaddafi brought this revolution to the African people, telephone calls made to Africa and out of Africa were the most expensive in the entire world! Many couldn't make international calls that could last for more than 5 minutes. The bill for such a call was ridiculously expensive such that only the few filthy rich could afford.

Just imagine having brothers and sisters, parents and friends anywhere outside your country, who cannot keep a close touch with the family because of exorbitant cost of communication. I remember when mobile phone services first came to Africa, to my country (Ghana to be precise), it was too expensive to make local calls. People were not even allowed the opportunity to beep or "flash" for free. There was nothing like free calls nor free browsing.

If it was too expensive to flash/beep a local number, then how could one dare to make an international call that could last?

Those were the days when it was only a few Africans living in Europe and America who could make calls to Africa. It was completely impossible for the ordinary African to make phone calls that could last, because Africa did not have our own communication satellites and we had to rely on using the services of European satellites. Since we had no way of escape, our European masters were charging Africans too much (hundreds of millions of dollars) for this services on a yearly basis.

But today in Africa, many people including the young ones are using two or three smart phones and could make free local calls including international calls that can last over 30 minutes in most cases at reduced prices. As for the internet, it is now unlimited! Young Africans can now stay on the internet, browsing the social networks for a whole day. They're are the first to hear about breaking news from the other side of the Atlantic Ocean. Today Africans are using the internet and telecommunication services like never before to stay in touch with their loved ones and get connected to business opportunities around the world. Has anybody taken the pain to even consider how many Africans could enjoy this opportunity if it was not for Gaddaf's bold contribution?

It began in 1992, when 45 African nations established RASCOM (Regional African Satellite Communication Organization) so that Africa would have its own satellite and slash communication costs in the continent. This was a time when phone calls to and from Africa were the most expensive in the world because of the annual US$500 million fee pocketed by Europe for the use of its satellites like INTELSAT for phone conversations, including those within the same country.

An African satellite only cost a one-time payment of US$400 million and the continent no longer had to pay a US$500 million every year to Europe. Which banker wouldn't finance such a project? But the problem remained – how can slaves, seeking to free themselves from their master's exploitation ask the master's help to achieve that freedom? Not surprisingly, the World Bank, the International Monetary Fund, the USA and Europe only made vague promises for 14 years. 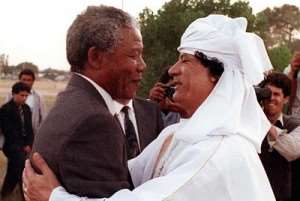 Gaddafi was very helpful in the fight against Apatheid in South Africa
Gaddafi put an end to these futile pleas to the western 'benefactors' with their exorbitant interest rates. The Libyan guide put US$300 million on the table; the African Development Bank added US$50 million more and the West African Development Bank a further US$27 million – and that's how Africa got its first communications satellite on 26 December 2007.China and Russia followed suit and shared their technology and helped launch satellites for South Africa, Nigeria, Angola, Algeria and a second African satellite was launched in July 2010. The first totally endogenously built satellite and manufactured on African soil, in Algeria, is set for 2020. This satellite is aimed at competing with the best in the world, but at ten times less the cost, a real challenge.

This is how a symbolic gesture of a mere US$300 million changed the life of an entire continent. Gaddafi's Libya cost the West, not just depriving it of US$500 million per year but the billions of dollars in debt and interest that the initial loan would generate for years to come and in an exponential manner, thereby helping maintain an occult system in order to plunder the continent. 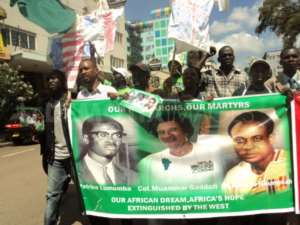 Youths in Kenya protest the murder of Muammar Gaddafi by NATO
This is one of the major reasons why European and American leaders hated Gaddafi and were therefore looking for any opportunity to murder him at all cost. They therefore resorted to terror tactics, they tried to assassinate Gaddafi on many occasions but they failed. Like they're currently doing in Syria, these heartless European and American leaders decided to supply weapons to rebels they have trained to cause chaos in Libya whiles their dishonest media heartlessly blamed it on Gaddafi.

They sought for a UN resolution to then go and protect civilians, when their actual hidden intention was to go and murder Gaddafi. Surprisingly many of the then African leaders, because of their greed and selfishness had secretly accepted bribes from the European and American politicians to betray Gaddafi.

Many of them were personally invited to travel to America and Europe where they held secrete meetings with the leaders, by which they agreed to at least stay quiet and allow their puppet masters have their way in Libya. They sold out Gaddafi for a few secrete dollar and Euro accounts, accounts that are loaded with the blood of their own African brothers and sisters. Gaddafi was murdered without any single one of them (with exception of President Robert Mugabe), saying a thing. Just like Judas Iscariot, who betrayed Jesus Christ, African leaders have now regretted their actions, while the African people pay the price (with their lives) for what happened in Libya. 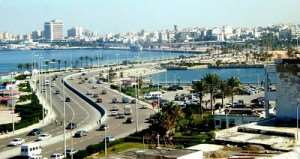 Tripoli before NATO's invasion
But to us the African youth, we will not be ungrateful. We will remember Gaddafi, not because he was a saint, but because we know it was him who helped us to be able to fully enjoy the sweetness of the 21st century's unlimited telecommunications services at highly reduced prices. Any time our mobile phones shall ring, anytime we connect to the internet, we will do so with Gaddafi in our minds.
To our Libyan brothers and sisters who are still caught up in this war which is aimed at stealing your oil resources and to completely destroy Gaddafi's legacy in the county, we want to assure you that you have not been forgotten. We are still praying for peace to be restored in your country for you to enjoy the resources of your motherland.
Unfortunately, it is our leaders who have failed you. But we the African people love you and we pray for the day when you will receive all that truly belongs to you.

Note: Some expressions, facts and figures in this article were culled from the article:
"Why the West Wants Gaddafi's Fall" written by By Professor Jean-Paul Pougala

Honourable Saka
The writer is a Pan-African analyst and the founder of the Project Pan-Africa (PPA), an organization that was established to unlock the minds of the African youth to take Africa's destiny into their hands. The PPA seeks to provide the biggest platform that will give international exposure to all hidden but exceptional talents in Africa. Please visit us at: www.projectpanafrica.org and support the project. PPA is grateful to ITech Plus and all media partners that support our vision for Africa. Email me at: [email protected]