How Could Japan Offer $32billion In Aid To Africa? 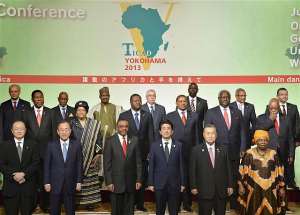 Here in 2013, if Japan can donate even $50m to Africa after the Fukushima disaster, then African leaders as a whole must bow down their heads in shame! As far as I am concerned, the recent and current African leaders have failed their people and I feel so disappointed about that.

In fact the development in Japan clearly shows that African leaders have been wasting our precious time for far too long! I feel so ashamed that instead of weeping for the 50 years of failure, leaders rather chose to celebrate 50yrs of 'success' in Addis Ababa.

What is wrong with Africa? When are we in Africa going to have visionary leaders like those in Japan, India, Brazil, China, South Korea, Singapore, Malaysia and others?

Japan and Fukushima Crises
It was barely two years ago since Japan was hit hard by the Fukushima disaster. The world watched with great pity and sorrow, the extent to which a whole country was almost washed out of the surface of the earth.

According to many economic forecasters and other political analysts, after the disaster the Japanese economy became too hopeless to the extent that any short term policies designed with the intention to transform the country within a decade would have been a day-dreaming exercise. The country had suffered to a magnitude that there was no way she could survive such economic turmoil any time soon.

Yet, it is very surprising that in less than 2 years after this Fukushima, coupled with its financial tsunami, the country managed to survive. Obviously, this couldn't have been without visionary leadership, selflessness, hard work and commitment to true leadership principles.

Thanks to selflessness and true leadership. Today the Japanese economy is booming so much such that the government is now in a position to donate huge sums of money to the tune of $32billion to African leaders, who are shamelessly queuing up to collect the said aid behind closed doors. This is despite African leaders collectively declaring at the just-ended AU summit on the need to be bold and shun aid once and for all.

What is wrong with Africa? And when are we in Africa going to have visionary leaders like those in Japan, India, South Korea, Singapore and others?

A few days ago (May 27) when African leaders gathered in Addis Ababa to celebrate the 50th anniversary of the OAU (now called African Union), while reading their speeches at the time, many of the leaders suggested that the time was right for Africa to be bold and reject all forms of foreign aid. Leaders rather urged themselves to demand fair trade instead. African leaders made all sorts of impressions that the continent is now bracing itself for a new sense of economic revolution devoid of foreign aid of any kind.

To refresh our memories on the words of our excellencies, here are a few statements some of them made at the just-ended AU summit:

1. President John Mahama (Ghana): the time is right for the AU to develop a funding mechanism with the goal of weaning itself from the heavy donor support.

2. Dr Nkosazana Dlamini Zuma AU C'ssion Chairperson: It can't be business as usual. We can't continue to depend on foreign aid. Yes, outside help is crucial and greatly appreciated, but we must also look at ways of making ourselves independent.

Unfortunately, 2 days after making these powerful and impressive speeches, the president of Ghana then flew to France where he lobbied for French aid. From there, he then flew to Japan where he again lobbied for Japanese aid. As if that is not enough, the Japanese government then pledged to give the entire African leaders, a total of $32billion dollars in aid for the next 5 years- a development which clearly indicates that these same African leaders have no intention to stand by exactly what they preached during the 50th celebration ceremony in Addis Ababa.

For this reason, Granfadaa' Ayitomeka, a Pan-Africanist who spoke on Radio Ghana's Current Affairs Programme, stated that the entire AU Summit was a wasteful exercise. He called on leaders of the AU to conduct referenda in their countries as to how the ordinary citizen wants to handle the problem of neo-colonialismwhich has reared its ugly heads everywhere in Africa, making in impossible for the African child to benefit from Africa's abundant resources.

What lessons are these leaders teaching the younger generation? Can the African people truly have any confidence in the words of our leaders? Can the world ever take African leaders serious when they issue statements?

When President Mahama travelled to Japan, the people of Ghana were expecting that he would have held serious discussions with the Japanese side, asking more questions about how the Asian country managed to emerge out of the Fukushima crisis with a much stronger economy in less than 2 years.

Ideally, Africans expected the president of Ghana and his African colleagues to have asked for all the strong economic policies and the measures which the Japanese counterpart put in place and ultimately made it possible for the government to generate all these money's within such a short period to the point where they're in a better position to give financial aid to Africa once again.

If Japan could do it in the midst of such crises, why can't our leaders do it here in Africa?

And why do we Africans get mesmerized and awed by the strength of other to support us while we do not strive to build our own strength? African leaders of today must bow down their heads in shame! Japan is a clear example of how bad has been without visionary leadership.

I have or the past few years expressed strong doubts about the ability of the continent to achieve economic independence in the next foreseeable future for as long as the thick colonial borders, tough visa restrictions on freedom of movement and the lack of confidence in the African products are concerned. Currently, there are simply too many trade agreements which have been signed by African leaders which are not working due to foreign influences based on colonial legacies.

Africa must consider the issue of industrialization, intra-African trade and the free movement of goods and services very serious. It is time for African leaders should listen to their people about the issue of importation of foreign goods which are killing the local industry.

Certainly, a country like Japan could not have survived without a strong commitment to industrialization and exportation of commercial products. They couldn't have developed by merely holding begging bowls, looking at some other nations to come and 'save' them just as we in Africa have been doing for the past 50years of our so-called independence.

How long should Africa continue to be the supplier of raw materials and the dumping grounds of imported goods?

Action is seriously needed from African leaders to see to the swift industrialization of the continent. We have had enough of the speeches and the lectures.

H.E Yoweri Museveni, the president of Uganda recently stated, if we admire the strength of others such as the USA, China, Japan and Brazil, let us build our own strength now.

Time to launch Africa's industrial revolution and to remove all those colonial chains (border and visa restrictions) which are hampering our development is now. Tomorrow may be too late.

The best time to plant a tree was twenty years ago.

The writer is a Pan-African analyst, anti-corruption campaigner and the founder of the ProjectPan-Africa (PPA), an organization established to unlock the minds of the African youth to take Africa's destiny into their hands.