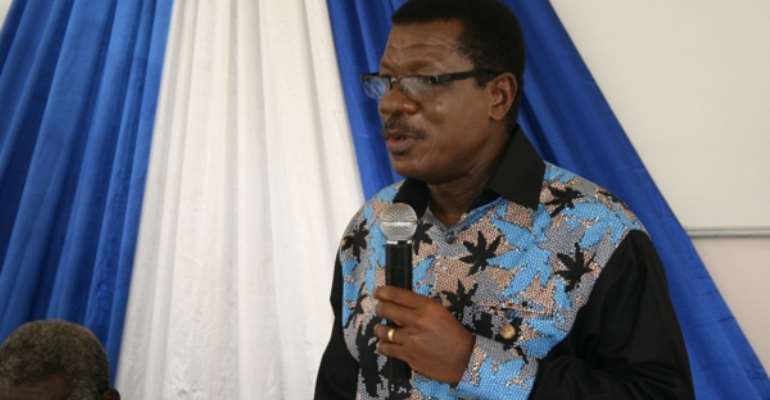 Millions of Ghanaians who tuned in on Monday November 12, 2012 to the much anticipated press conference by Pastor Mensa Otabil were left with acerbic taste in their mouths as the man of God with his voice filled with anger and hatred spewed inedible words to the packed audience.

When Pastor Mensa Otabil, head of the International Central Gospel Church (ICGC) who is viewed as an honourable man of God descends into such a state and refers to some people who are created in the same image of the God that he serves as evil, then something seriously has gone amiss and we indeed have a big problem on hand.

Pastor Mensa Otabil has used his pulpit to comment on so many social issues that touches the very hearts of Ghanaians, but when those comments were pieced together and played back to him, the man of God who could not go the way his Master Jesus went, simply lost it and went on a blistering attack.

If I go so low and hit somebody below the belt I can be forgiven. But when a pastor with the status of Otabil goes so negative and hits below the belt by using uncouth words it takes everything to a different level.

Pastor Otabil claims he is protecting his image and credibility hence the way he forcefully and angrily persecuted his so-called enemies. What did Jesus Christ who was spat at, beaten, hounded and insulted do? He turned the other cheek, something that Pastor Otabil woefully failed to do but rather became a cry baby trying to protect his words that he has spoken in the past. Matthew 5:39 says it all, "But whoever slaps you on your right cheek, turn the other to him also.

Pastor Otabil finds himself in the hot seat because the very words he has spoken in the past has come back to bite and haunt him. Many people were expecting him to deny that the voice was not his or the words were not his. But if it is the voice of Pastor Otabil that we have been hearing for the past two weeks, then Pastor Otabil, I say you don't have any case.

Several questions come to mind when you want to comment on this hot button issue. Did Pastor Otabil mock the free Senior High School on the tape? The answer is yes? Did Pastor Otabil say that anybody with the “All die be die” mantra is a bad person? The answer is yes. Did he per chance also say that if you want the best education for your child you have to pay for it? Yes, he did. If Pastor Otabil indeed said all that, then it does not matter how long he said those things and at what forum.

People who have served God faithfully have never had it easy. Their faith have been tested and some have passed the test or stood the test of time. They did not falter nor fainted. They did not denounce people because that was not the way Christ went. Let's read what happened to Paul in 2 Corinthians 12:7-10.

7Therefore, in order to keep me from becoming conceited, I was given a thorn in my flesh, a messenger of Satan, to torment me. 8 Three times I pleaded with the Lord to take it away from me. 9 But he said to me, “My grace is sufficient for you, for my power is made perfect in weakness.” Therefore I will boast all the more gladly about my weaknesses, so that Christ's power may rest on me. 10 That is why, for Christ's sake, I delight in weaknesses, in insults, in hardships, in persecutions, in difficulties. For when I am weak, then I am strong.

Perhaps Pastor Otabil may have forgotten that following Christ is not that comfortable because he lives in a comfortable 1 million dollar house at Trasacco Valley.

When Pastor Otabil realized that some people have become a thorn in his flesh by playing back his sound bites to him, he should have known that God's grace is all that he needed. He did not need to have used uncouth words to fight back. Pastor Otabil seems to be watching his credibility and measuring it down the lane.

But a real man/woman of God does not care what people say or do about them. They just speak the truth and leave the Holy Spirit to do His work. They don't fight back. They don't contest what they have said. In fact they don't use strong words to describe their accusers.

Pastor Otabil lost it. I would have kept quiet and many Ghanaians who are not even pastors would have done same. We are not taking our credibility here on earth to heaven. Its God who will eventually put His seal of approval on us when we get there and not how human beings view us here on earth. Man can always be wrong in judging people: God always gets it right!

In doing God's work here on earth we will be vilified, insulted, beaten and name it, but we protect nothing. We have no credibility to protect because at the end of the day when we have done all that is commanded us, all what we have to say is, “We are unworthy servants; we have only done what was our duty.” These are the basic rules in the bible that Pastor Otabil may have forgotten to observe.

Pastor Otabil has exposed himself into public ridicule. Many people could not believe Pastor Otabil saying that, “Don't use my words, they are mine.” Wrong! Whatever we have as Christians belongs to G………od. I can hear Pastor Otabil shouting this.

Otabil stated that he is a man of God, but he probably forgot to add one thing. He should have stated that he is also a businessman and makes a lot of money from his business dealings which spans from speaking engagements, schools to banks. May the Good Lord have mercy on us! And never again should a Pastor angrily pounce on people created in the image of God and describe them as Evil.