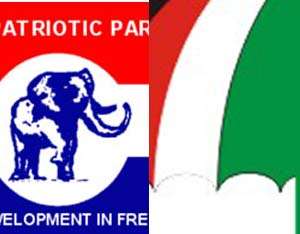 The world is now a global village. And anything that happens in Ghana is immediately read in America and other parts of the world, and it stays there!!!

The article “Planned demo, attempt to injure Ghana's international image” published on www.ghanaweb.com, on Thursday, 27th September, 2012, and authored by Osborne K. Sam for NDC-USA is not only laughable, and abhorring, but lack the intellectual appreciation of modern technological advancement that makes it easy to access information, the world over.

Again, need I remind NDC–USA that there are foreign representatives of most countries of the international community in Ghana, who share the day – to – day happenings of our country with their authorities?

The corrupt and ponzi schemes that have been initiated by the Mahama led NDC administration to steal and siphon the tax payers monies, as witness in the Woyome scandal, CPgate, Isofotongate, Rockshellgate, the fraudulent STX deal that has resulted in the fleeced of $264million of the taxpayers' monies, the corrupt stinking Ghana – Cuba scholarship deal by Mahama, are all boorish praetorian practices known to the International community.

The inaction of John Mahama on the annihilative Yaw Boateng Gyan's “secret” tape shows how reckless the NDC has become in the protection of the peace and stability of our nation. It is obvious he (John Mahama) has put party before country in this case. But, to all and sundry, the now “immuned” Yaw Boateng Gyan is a walking illegality in the country.

NDC – USA, didn't you hear the Secretary General of the United Nations, Ban Ki Moon's call on John Mahama and the EC to back off from the creation of the 45 new constituencies, few days ago?

Well, Ghana's image in the eyes of the international community has already been damaged by the corrupt ridden governance of Mahama and his cohorts of political bandits. So now, what image are you talking about?

For the records, NPP – USA has got nothing to do with the organization of the demonstration! According to the information available, it was organized by ordinary concerned citizens of Ghana living in the U.S. and who have the development of the nation at heart. But as members of such a great party, and most importantly citizens of Ghana, we do admit the reality and existence of the fundamental concerns that underpinned the organization of the demonstration. And in the spirit of patriotism towards our dear nation, we will support such concerns – any time – regardless of who raise them.

For us, our aim is to commit our strength and wherewithal to saving our nation from fast forwarding into the dangling depth of the dungeon under the leadership of Jonh Mahama and the NDC. And that means a massive garnering of support for the Nana/Bawumia ticket!

The pointing of fingers by NDC – USA in the wake of this demonstration shows how paranoid and disillusioned the NDC as a political entity has become. It also shows how undemocratic, intolerant and insensitive John Mahama and his NDC are to the plight of ordinary Ghanaians.

Ghana's international image has long been injured by the Mills/Mahama administration, and it will take the radical transformational agenda of Nana Akufo-Addo and Dr. Bawumia to salvage this deteriorating and denting image. Ghanaians are not gullible; they know this simply truth. They will vote out the incompetent John Mahama and his NDC, come December 7th.