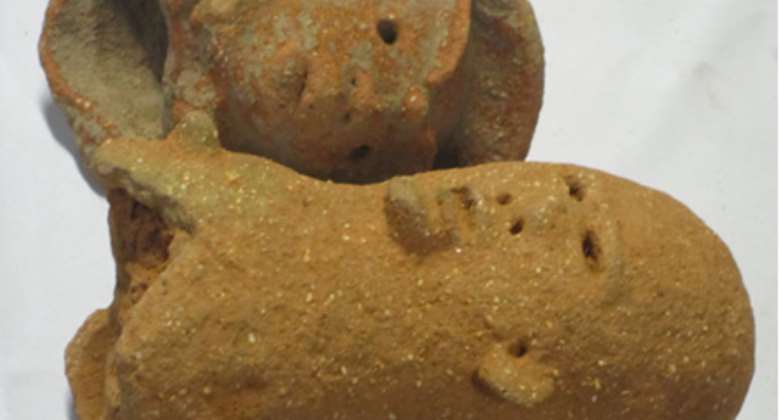 Nok sculptures returned by American officials to the Nigerian Consul-General in New York on July 27, 2012.

On reading reports that the National Commission for Museums and Monuments (NCMM)) has declared that the Nigerian terracotta seized by United States Immigration (Homeland Security Investigations, HSI) and returned to Nigeria are not from the National Museum at Lagos, one gets the impression that the Commission is relieved that the sculptures were not stolen from the Lagos Museum. (1)

It will be recalled that at the handover ceremony at New York, the Nigerian Consul General was reported as saying that these artefacts had been stolen from the National Museum at Lagos and that some officials were being investigated in connection with the matter. (2) One would assume that the Consul General, who represents Nigeria's interests, would consult the competent office in Nigeria, in this case, the National Commission, before making such statements. Did he not consult at least the Ministry of Foreign Affairs before expressing views on this matter? If this is the case, then Nigeria has a more serious problem.

It was also suggested that there should be an independent inquiry into the matter. So far no such inquiry has been announced nor does it appear that any report has been issued on this matter. An inquiry could inform the public about the origins of the seized artefacts as well as clarify some of the other relevant issues.

Accepting that the artefacts did not come from the National Museum in Lagos as the Consul General had stated, is this the end of the matter? Could the objects have been stolen from other museums in Nigeria or is the Lagos Museum the only one worthy of attention and protection? (3) Could the objects have been looted before there was a ban on the export of Nok terracotta? Are the other museums, including those described as national museums by the decree establishing the commission, not the concern of the National Commission which is charged by its founding law with the preservation and protection of Nigeria's cultural heritage? (4)

It is also reported that the National Museum at Lagos “since 1996 had not recorded any theft of antiquities from its collections” and that “no object has been stolen from any Nigerian museum since the last series of burglaries in the early 1990s”. Moreover in those series of burglaries, the Lagos Museum was not affected. The pieces stolen then were put on ICOM's Red List.

Many of the pieces have been recovered and returned to the museums. But no specific details have been provided.

The National Museum at Lagos and the other Nigerian museums appear to be the best guarded in the world. In this connection, it may be recalled that a few weeks ago an article in The Guardian alleged that Nigerian museums have been ordered not to record losses:

“The Guardian gathered that the commission has since discontinued the mechanism for the inventory of Antiquities.

The software for computerization was wiped off from the computers supplied to the stations. Some stations were asked to discontinue documenting clearance permits and the computers were diverted for use in other areas,” claimed a top source close to the National Museum management.” (5)

It is also difficult to reconcile the secure situation of the Nigerian museums with the statement by a museum official that losses by Nigerian museums are regularly reported to ICOM and other international agencies:

“I know that theft of museum objects when they occur are regularly reported to the security agencies, relevant international bodies, etc. So it is not correct to assert that the museum authority do nothing in reporting loss of its objects.” (6)

Can there be report of losses if there are no losses?

The returned artefacts were taken away from specific places by certain

individuals along known routes. They are part, or more accurately, victims of a world-wide international illicit traffic in cultural artefacts. The destroyers of African culture do not always sit in the Western world.

The exact source of the looted Nok as well as the routes and persons involved in the operation should interest Nigeria and other African countries such as Burkina Faso, Ghana, Mali and Niger that have suffered from looting of artefacts for a considerable period. (7)

Suggestions and calls for full investigation into such matters should not be seen as attacks on individual persons or institutions but as part of the ongoing efforts to save our cultural heritage for future generations. Failure to give these matters the care and attention required would only lead to inability to assume the role we should be playing.

The “manifest destiny” proclaimed by earlier generations of Nigerian leaders (8)would be rendered a sour joke for historians and political scientists if we are unable, even in the cultural field, to maintain the pre-eminence attributed to the peoples of Nigeria, as demonstrated by the rich and magnificent cultural artefacts of the country. (9)

Figure of a seated male. One of the looted Nigerian Nok terracotta bought illegally by the French, now in the possession of the Musée du Quai Branly, Paris, France, with post factum Nigerian consent. This piece and the others are displayed in the Pavillon des Sessions, Louvre, Paris.

“Who stole Nigerian artefacts returned by US? “ Peoples Daily, www.peoplesdaily-online.com/.../2759-who-stol...

4. National Commission for Museums and Monuments Decree 1979
Decree no. 77, 28th September 1979
The Decree lists in its Second Schedule the following as national museums;

6. Letter from P. Odey dated 7 August 2012 in AFRICOM-L, with reference to an article by K. Opoku, titled “Shall We ever Know the Truth about Illegal Export of Sculptures from Nigeria?”

7. See Peter R. Schmidt and Roderick J. McIntosh (Eds.), Plundering Africa's Past, Indiana University Press, 1996; Neil Brodie, “An outsider looking in: Observations on the African “art” market', http://traffickingculture.org
See also the entry on Nok Terracottas in the encyclopedia section of this new website which promises to be a useful source of information on the international illicit traffick in artefacts.
Patrick J. Darling, 'The rape of Nok and Kwatakwashi: The crisis in Nigerian Antiquities', http://www.mcdonald.cam.ac.

8 .Bolaji Akinyemi, “Even before the independence of Nigeria, there had grown up within the domestic political intellectual class and the international foreign policy elite a belief in the manifest destiny of Nigeria to play a mega role in world affairs.
“The physical size of Nigeria, the state of her economy and the size of her population vis of vis other countries in Africa have bred an expectation of a leadership and activist role for Nigeria in the global system, a state with a manifest destiny to become a Black Power.”
Nigeria - The Blackman's Burden
www.dawodu.com/akinyemi3.htm -

Dr.Nnamdi Azikwe,” It should be the manifest destiny of Nigeria to join hands with other progressive forces in the world in order to emancipate not only the people of Africa but also other peoples of African descent from the scourge of colonialism. Science has demonstrated that no race is superior to another. History has shown that no race is culturally naked. That being the case, Nigeria should be in the vanguard of the struggle to liberate Africans from the yoke of colonial rule.”
(1959) Nnamdi Azikiwe Speaks on the Role of Nigeria and other African States in World Politics, www.blackpast.org

9. Many of the magnificent and precious cultural heritage artefacts of Nigeria such as the Benin Bronzes, Ife sculptures and Nok sculptures are held captives in Western museums in Berlin, Boston, London, Paris, New York and other places
See Ekpo Eyo, From Shrines to Showcases: Masterpieces of Nigerian Art, 2010, Federal Ministry of Information and Communication, Abuja

In flagrant violation of many United Nations and UNESCO resolutions, these museums shamelessly and arrogantly refuse to return the looted/stolen artefacts despite demands from the Nigerian Government and peoples. Western museums are reinforced in their immoral and unjustifiable refusal by some Western scholars who have banned morality and justice from their discourse on culture and looted artefacts. The beauty, magnificence and significance of artefacts seem to suffice to justify their undoubtedly illegal acquisition. See K. Opoku,
Would Western Museums Return Looted Objects if Nigeria and Other African Countries were ruled by Angels? Restitution and Corruption.
http://www.modernghana.com

The Nigerian National Commission for Museums and Monuments has recently reiterated Nigeria's desire and determination to secure the return of these national icons. See “Nigeria's Antiquities Abroad Must Return-NCMM”,
http://dailytimes.com.ng/
“Boston's Museum Of Fine Arts Urged To Return Looted Artifacts To Nigeria”
http://www.huffingtonpost.com
Daily Times, “NCMM demands return of artifacts from US museum”

What we do not yet know is whether these general demands have been followed with requests on official letter-head, dated and addressed to specific institutions
such as the British Museum, London, Museum for Fine Arts, Boston, Ethnology Museum, Vienna, Ethnology Museum, Berlin and Field Museum, Chicago, requesting the return of specific objects.