Is Rawlings Losing It? 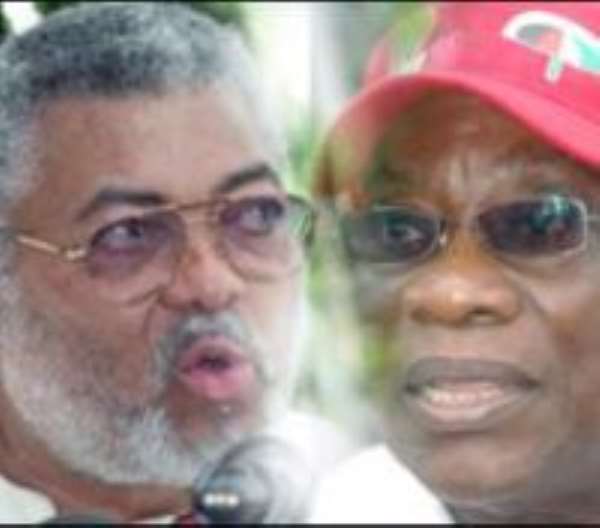 How can you taunt, humiliate, insult and disrespect somebody even when he is dead and yet to be buried? How can you be so heartless and demean an ex-President by using uncouth language and syntax to describe his passing. I mean how can you reduce yourself into an undignified ex-president and verbally abuse a sitting president and even continue to belittle him after he had died? How can you disrespect the former First Lady, Mrs. Naadu Mills and her family by suddenly turning into a medical doctor and falsely describing what might have killed President Mills when the autopsy report on his death is not yet ready? It only takes somebody who goes by the name JJ Rawlings, the man who needs no introduction and may go down as the most unseemly president Ghana has ever had.

Never in the history of Ghana have we seen or heard a sitting President vilified and verbally abused more than ex-President John Evans Atta Mills. Even a day after President Mills had died and resting peacefully in the morgue whilst tons of well-wishers including world leaders are consoling Ghanaians who have still not come to terms with the sudden demise of President Mills, one of his bitterest and most hateful critics, JJ Rawlings shamelessly was chasing after his ghost.

Rawlings who was doubling as a Soothsayer and Medical Doctor all rolled in one did not hide his hateful feelings towards President Mills when he stated emphatically in an interview with the BBC that if President Mills had done “something wiser” he could have survived a while longer than he did.

Rawlings who perhaps knew about the pending demise of President Mills because he may have been using the Ouija Board stated that he was not surprised the least when he heard about the death of President Mills. What Rawlings said next was more shocking and demeaning than what the eye can meet. Please hear this unrepentant soul called Rawlings in his own words, “It was quite a shock to both my wife and I because he's been battling the cancer for quite a while but this is certainly the wrong time for him to go because we have elections around the corner in December.”

Heartless and selfish Rawlings is more concerned about the pending elections than what has happened to President Mills and his grieving family as well as the entire National Democratic Congress (NDC) family and the nation at large. What even makes the statement by Rawlings tantamount to deception is that it is this same Rawlings who has written off President Mills' chances in the December 7 elections.

You don't predict multiple times that somebody is going to lose the December 7 elections and wish that that same person you have written off had lived longer to go through the elections you have stated emphatically that he was going to lose. What was Rawlings' motivation in saying that? Readers, Rawlings may be unhappy with God for taking President Mills away five months before the elections because the intensions he and his wife Nana Konadu Agyeman Rawlings have haboured all this while is to see President Mills go through the December 7 elections and lose so that they could turn round and say, “We Told You So.”

Rawlings who thinks he is smarter and wiser than all Ghanaians went after a dead president at the time that the whole nation is grieving by saying that, “quite frankly I think that had he been advised and done something wiser earlier on, he could probably have survived for another six,

seven months, I guess but it got too tight, it got extremely tight.” This man better not step at the doorsteps of Mrs. Naadu Mills' house to console her and the family because he has proven beyond reasonable doubt that he is so callous.

And when Rawlings was asked about his impression of the late president's legacy, he beat about the bush and blurred the following foolish words, “he's played his part. As my Vice President, he was one of the finest but there again, considering that the cancer affected his eyes and ears, he couldn't sustain more than three hours a day so it was naturally going to affect his performance.” And to make matter worse Rawlings expressed his unhappiness and was chasing the ghost of President Mills for not reinvestigating the cold-blooded killings of people under ex-President Kufuor's regime.

Even when petty Rawlings was asked about his impressions on newly sworn-in President John Dramani Mahama, Rawlings who lobbied then candidate Mills to make Mahama his running mate for the 2004 elections has nothing better to say about him by simply stating that, “I don't know but I hope so.”

We are not all medical doctors but we can talk about other people's sicknesses or ailments. That is why I would want Ghanaians also to know that Rawlings has been battling multiple ailments including Parkinson's, Alzheimer's and a heart disease. If you see the beard of a friend catching fire you better fetch water and put it by your side.

For readers who do not know much about Parkinson's disease, it is a progressive, degenerative neurological condition which normally affects the control of body movements. It causes trembling in the hands, arms, legs, jaw, and face; rigidity or stiffness of the limbs or trunk; slowness of body movements; and unstable posture and difficulty in walking. Early symptoms are subtle and occur gradually.

The Alzheimer's disease is a form of dementia, which is a neurodegenerative disease that damages the brain's intellectual functions notably the memory, orientation and calculation among others but usually preserves its motor functions. Although usually a disease of later life (generally after the age of 60), it may rarely affect persons as young as age 30.

We were all happy when Rawlings who has been bashing President Mills and has never hidden his hatred for the man when he was alive went to the Osu Castle about three weeks ago to check on him. Even though the meeting was held behind closed doors what Ghanaians do not know is that Rawlings after the meeting asked the late President Mills for money to battle his multiple diseases of which President Mills agreed and gave him the money he needed. Rawlings may not want his wife to know that he went to the Castle and turned himself into a beggar, but I am asking him to deny or confirm this information.

When President Mills died, of all the 25 million Ghanaians, Rawlings was the only one that Ghanaians expected to have known better in commenting about him. But for the desire of his wife Konadu Agyeman Rawlings' unsuccessful presidential ambition which will never happen as far as we have a nation called Ghana, Rawlings unjustifiably descended on President Mills just hours after he was sworn-in as president in 2009 and kept the heat on him till he died on Tuesday July 24, 2012 at exactly 2:15 pm.

Rawlings is today talking about the ailments of Mills, but he has forgotten that his constant jabs and unnecessary pressures largely depressed President Mills when he was in office. Matthew Chapter 5:10 states, “Blessed are those who are persecuted because of righteousness, for theirs is the kingdom of heaven.” President Mills is gone home. He went peacefully, but Rawlings who is just 65 and battling so many diseases should not rejoice because he does not know tomorrow.

If Rawlings does not know the severity of Parkinson's disease he should just check on one of the greatest boxers in history, Muhammad Ali, who is down with the Parkinson's and today cannot even talk and look far older than his age.

Even in death, Rawlings is still breathing heavily on Mills' corpse which is lying in icy cold at the morgue while funeral preparations are underway. Shut up JJ! And don't hate a dead man!

Food For Thought: By the way, who is Paul Gyamfi, a Ghanaian who found himself in a hospital in Switzerland?