BELIEVE IT OR NOT – MODESTY IS IN NEW YORK WITH ATTA MILLS~! 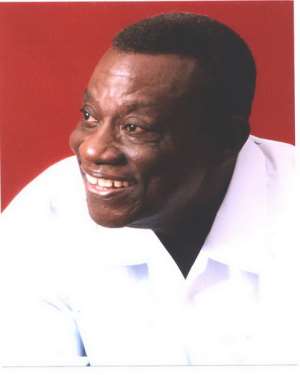 Well, we are here! Just some days ago, the whole Nation was plunged into darkness at the same time – no one can confirm what really happened; just weeks ago, the finance minister read the 2012 Budget full of repetitions from previous budgets and a budget nicknamed by many as the farewell budget; just days ago, dozens of fulanis were butchered in Gushiegu; the Auditor-General's report is out and oh, a 'paltry' amount of 420billion of our tax payers money has been dashed to NDC financier, Alfred Agbesi Woyome for absolutely no work done and I should quickly add that this is the same man who once sought to scare the dreaded Larry Gbevlo Lartey; but we are still here! A week or so ago, a competent court of jurisdiction established that for close to three years, our government had been defrauding us on a daily and very regular basis by adding illegally almost GH¢1 to our fuel prices and keeping those amounts in accounts no one can verify – by simple calculations, a taxi or trotro driver who buys 6 gallons of fuel a day has been defrauded of a whooping GH¢5,475.00 in the last two and a half years; but though the court ordered for the illegal amounts to be immediately removed and the accumulated cash paid to the consolidated fund, the government has treated the ruling with disdain and completely ignored it; and yet we are still here. Just last week, two VIP buses were ambushed and the passengers and drivers were robbed of every possession of theirs but they are also here and the list is endless! But somehow, the man we queued to go and elect 3 years ago in the scorching sun is nowhere to be found, no sorry, he says he is chilling in the Big Apple – New York City!!!

No! Am not talking about the late Mobuto Sese Seko or the late Omar Bongo of Gabon! Am talking about the living John Evans Atta Mills of Ghana. In case you haven't realized, our President/ father has abandoned us for about a month 'chilling' or doing something far away somewhere in the Americas. Our father decided that since we had given him so much to be unhappy about, he had to go far away from us so he could rest after just about a year of taking a similar break! And this is the man who said he was modest?

To answer your question, yes he is the same man! The man who claimed he was so modest and who apparently is the most modest man to have been elected President, the world over! The man who would pack himself and his ministers in a brand new air-conditioned bus and take a ride from the Castle to the Kofi Annan International Peace Keeping Centre and take photos of the very 'long trip' and splash it all over the internet to prove the point and drum it home far enough that he is very modest! That is the same man who today tells us that for the past 4 weeks, he has been loving his life and resting in North America which is currently in Winter – he prefers the cold to our warmth and he prefers the 5-star facilities to your Peduase lodge or your Holy Trinity Spa or to any other such facility in Ghana!

Ironically, this is the man who immediately he stepped foot in Canada, a country which does not really attract the attention of the World Media as others, dictated to all African leaders to start flexing their muscles to the west and to BE BOLD; sorry that's for the Rawlingses who he does not see eye to eye with after they moved through the sea, climbed the Everest and spent days in hell all to see him elected as President! Yes, so he implored us to flex our muscles – then he took the first step after that declaration,- he decided to relax his muscles not in Africa but in the West!

I didn't see a headline which went like “Our Modest President Off to Chill in the US”. But that's expected! We have a media landscape which is able to turn the UN Secretary General into an examiner of Presidents across the world and declare that one of them, the one in Ghana, is the best of the lot in Africa! But yes, our modest President has abandoned us – not for Togo, which is closer to home, or Benin – which is also closer to home or even Equatorial Guinea where one of his role models rule but for far away Abrokyire – the U.S of A!

But were you expecting something different? How myopic of you then! Sorry! Is this not the same Atta Mills who immediately he was sworn in, trumpeted to the whole world that he would use a 3-car convoy? Immediately that promise was made, come and see. The lead praise singers like Kwesi Pratt Jnr. and the officially designated liars and propagandists like Okudzeto Ablakwa were all over the place – from gate to gate; door to door, stereo to stereo, speaker to speaker- singing to the high heavens that indeed the Messiah had arrived! This was the messiah Ghana and Africa had awaited since the split of Gondwanaland~! Indeed, am not exaggerating but some even begun to doubt if this was not the true messiah the prophets had spoken about in Isaiah and other books of Prophecy in the old testament. Among others, he was hailed as the man who had brought modesty and decency into the Presidency and praised to the high heavens! It didn't even last 3 months, and the man was all over the place moving in a dozen cars! Three (3) years down the line, the three (3) car promised convoy has become a thirty-three (33) car convoy and sometimes when he is in some parts of the country, the cars are over 75!

So they sat down and thought. The President is supposed to travel in 33 cars, but he promised to do so in only 3 cars but Ghanaians won't be so outraged if they see a 10 car convoy as a 33 car convoy; so simple! So if the President is supposed to travel to my hometown of New Jejeti, the first convoy of 10 cars would set off. Immediately that convoy gets to Ofankor, the second convoy of 10 cars would set off from the Castle and this is the one with His Royal Highness, the one and only President of the Republic of Ghana, the Most High and his Holiness – Prof. Atta Mills. When this convoy reaches Nsawam, the third convoy, this time of three cars, sets off from the Castle; anyone it drives by on the road would just assume it as probably some friends driving to the same place and when this miniature convoy gets to Achimota, the final convoy of 10 cars sets off from the Castle. When the first convoy gets to Asamankese, it stops; there is no fault, nothing but probably the drivers are tired, but they stop for enough time for the second convoy to catch up with them before the first convoy sets off again leaving behind the second convoy with Prof. who would be 'catered for' before they set off again; then just as the first convoy gets to Akyem Sekyere, it stops again and this time waits for all the parts of the full convoy to catch up and then together they move in to New Jejeti. So really, it would be only the people of New Jejeti who would see that the President came with 33 cars, all the others on the road from Achimota through Ofankor through Nsawam, Suhum, Osino etc. would only see 10 cars or if they are not lucky – 3! That is how far we have come and how far the Presidency would go to cover up its tracks. And oh, I honestly forgot – from ABC junction all the way to Suhum, the President while in the second convoy had his head bowed down as an admission of his failure in the past 3 years (36months) to complete the road that links the two biggest cities in Ghana, though the Road was initiated and was progressing very speedily under the NPP.

I am trying to end; I didn't expect the piece to go this long but hey, the flaws of the Mills/Mahama admistration if compiled would take more pages than the whole Encyclopedia Britannica, so forgive me!

For those who are old enough to have lived in the year 2008, you would recall that this was the same man who went from door to door preaching modesty and attacking the Kufuor administration for what he termed 'obscene profligacy'; he went round claiming that as for him, he was not born with a silver spoon in his mouth and that he would run a lean and modest government. He spoke so much about modesty and the cost at the time of our running our government that I began to truly believe that for the first time in the 21st century, we would see an elected President who would use Horses and Chariots as his main and primary source of transportation. But that expectation of mine was bitterly dashed as he chose to use same or even heavier cars than he predecessor.

But I didn't give up hope! I thought that with the noise he had made about modesty, the least he would have done was to direct his Ministers to use Kia Prides as their official vehicles and order Deputy Ministers to use Ticos; but that again was dashed. Instead, he ordered fresh V8s for all Ministers and Deputy Ministers of the modest man are today riding and bunking all over the place in SUVs and all sorts of V8s etc. though under the so called profligate Kufuor Administration, Deputy Ministers were using saloon cars. Indeed, heavier forms of the cars used by the Kufuor Deputy Ministers are today used by special assistants and roamers and hangers on at the castle and at the various ministries!

After three years, that is how far Modesty has come; and oh, roll back! The P/NDC which in 19 years of pure dictatorship and semi-dictatorship failed to build for itself a head office, is today in and in less than 3 years under the modest Atta Mills building a 20-million dollar head office. The explanation of the National Organizer on the building is interesting. Though he initially accepted the building to be theirs, he came back after sleeping to tell us that it was not theirs! The building suddenly had no owners but construction was still ongoing! And he added that maybe, some business men are putting up the structure and after it is complete would donate it to the NDC – and these businessmen are of a kind; businessmen who only donate such huge amounts and edifices to the NDC only when they are in power and sit and watch while the NDC is sacked from its offices and watch when the NDC is unable to pay its electricity, water and telephone bills or buy koko for their security when they are in opposition!

Meet You Somewhere in the Bitter Ghana!!!