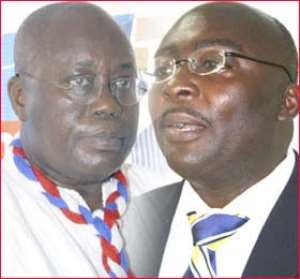 Savvy politicking is far less about conscientious forthrightness, unalloyed truth and honesty, and so I don't expect any key figures among the top-echelons of the New Patriotic Party (NPP) to take Mr. J. H. Mensah to task for rather mischievously suggesting that Nana Akufo-Addo's photo-finish loss of the 2008 presidential election, to then-Candidate John Evans Atta-Mills, was squarely due to the NPP flagbearer's choice of Dr. Mahamadu Bawumia, the former deputy governor of the Bank of Ghana, as his running-mate (See “Bawumia's Choice Was a 'Mistake' And a Rush – J. H. Mensah” Ghanaweb.com 12/9/11).

Those of us avid watchers of Election 2008 cannot sincerely gloss over the fact that by the time that Nana Akufo-Addo came around to selecting his running-mate, the NPP presidential nominee had been so internally damaged by his own ideological kinsmen and fellow Danquah-Dombo-Busia travelers that had the former MP for Akyem-Abuakwa South fielded Jesus Christ of Nazareth as his running-mate, Nana Akufo-Addo would still have lost Election 2008. There was simply too much bad blood among the top ranks of the NPP, and also too much ill-will for the former Attorney-General and Justice Minister to have triumphed.

And here, of course, there is no need to delve into deeper details, except only to casually observe that the homestretch policies of then lame-duck President John Agyekum-Kufuor did not appreciably redound to the benefit of his heavily-favored successor to Jubilee House and/or the old, Danish slave castle at Osu. And virtually nobody knows this better than the globally renowned octogenarian economist, because Mr. Mensah practically sat just an arm's length from the presidency.

And, of course, among such patently inauspicious homestretch policies were the timing of the purchase of the Gulf-Stream presidential jet, the entire way and manner in which Nana Akufo-Addo's name came to be placed on the National Merit Honors List, the plainly unwise release of arbitrarily jailed taxi-cab drivers, the crassly expedient reduction in fuel prices, and the perceived partiality of the outgoing President Kufuor towards a particular presidential aspirant against whom the rest of the 16, or so, other presidential aspirants unfairly vented their spleen. Matters were also not remarkably helped when, as the late Mr. Joe da Rocha aptly observed, limited and precious campaign resources and time were frittered on ineffectually attempting to assuage wounded egos and unbridled passions.

In the end, it is our unabashed contention that so irreparably damaged had the NPP drum-major become, both corporeally and psychologically, that Nana Akufo-Addo was left with absolutely no other choice than the apparently “neutral choice” and candidacy of Dr. Bawumia that he quite wisely settled on, under such trying circumstances.

It is also rather foolhardy for heavyweight NPP operatives like Mr. Mensah to cavalierly pretend that “regional balance,” as a savvy political equity concept, has absolutely no relevance for NPP political culture when, in fact, it is quite the norm than the anomaly. And also when, in fact, for better or worse, such a balance can be measurably perceived to have remarkably blunted the widely held voter perception of the New Patriotic Party as the veritable and exclusive institutional preserve of Ghanaians of Akan ethnicity. But, perhaps, it may be quite in order to point out to the likes of Mr. Mensah (not that he may not be intimately familiar with the same) that even here, in our democratically advanced United States, regional balance is the staple political diet.

As for the tired platitude of “competence,” suffice it to observe in passing that Mr. Mensah unpardonably insults our northern-Ghanaian kinsmen and women when he sarcastically, albeit apparently unwittingly, implies, somehow, that while indeed it may not be the peculiarity of any specific geographical location in either Ghana or across the globe, nevertheless, “competence” is a salient political commodity that may be best prospected – or searched for – anywhere in Ghana except the three northern regions.

And while this article does not, in any way, presume to hold brief for Dr. Bawumia, suffice it to say that the choice of his running-mate ought to be fairly conceded, by even his staunchest supporters and advocates, as the one “constructive mistake” to which Nana Akufo-Addo is democratically entitled. Let it also be fairly stated for the record books that in Dr. Bawumia, Ghanaians may well have found our veritable and potential Barack Obama – a deft synergy of intellectual and political acuity.

*Kwame Okoampa-Ahoofe, Jr., Ph.D., is Associate Professor of English, Journalism and Creative Writing at Nassau Community College of the State University of New York, Garden City. He is Director of The Sintim-Aboagye Center for Politics and Culture and author of “Dr. J. B. Danquah: Architect of Modern Ghana” (iUniverse.com, 2005). E-mail: [email protected]