Soyinka Wows His Detractors Once More 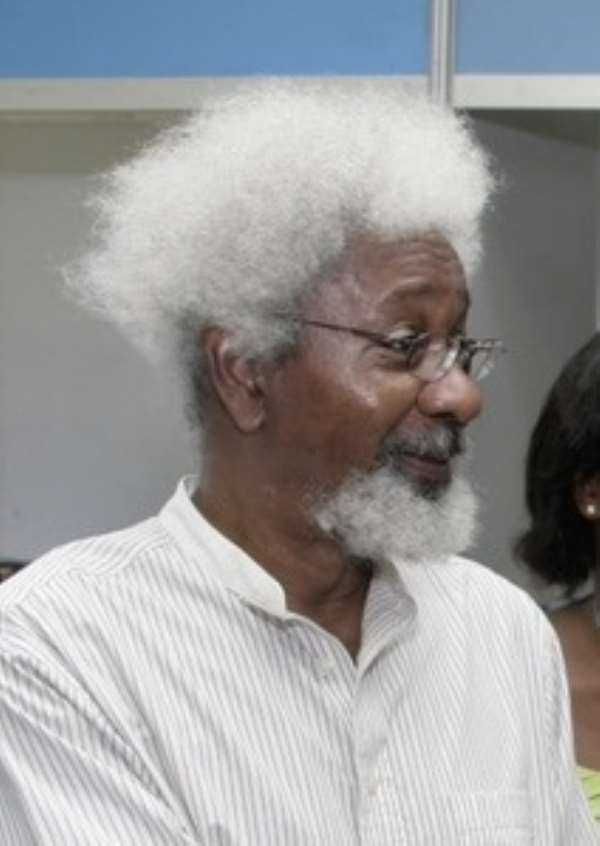 One of my happiest moments recently, was when I returned home from work on the night of Tuesday, December 7, 2010, and my wife pointed to me an article written on my most favorite African, and Nigerian, writer., Prof. Wole Soyinka. Actually, I have two favorite Nigerian writers. The other is Prof. Chinua Achebe, who also happens to have taught me African Literature at the City College of New York of the City University of New York (CCNY of CUNY).

The article in question was titled “ 'I Was Dashed a Doctorate,' Says Wole Soyinka.” What enthused me about the same was two-fold. First was the fact that my wife delightfully appeared to be finally catching up with subjects of my interest, as far as African affairs were concerned. I must also promptly add that the article appeared in a newspaper called African Abroad-USA. I have been familiar with the latter since about 2001, having also written a remarkable number of columns and book reviews for the same, until the rudeness of its editor-publisher compelled me to advise him never to carry my writings in his paper ever again. And the reason was simply that, as had been the case with the editors and publishers of most of the Nigerian papers that I have written for in the past, my not aggressively demanding to be paid had often and routinely been cavalierly chalked down as conveniently tantamount to virtual irrelevance, and thus the capricious decision by almost every one of these editors and publishers to publish as and when, as well as wherever in their newspapers, they deemed meed, or appropriate, to run my stuff, more often than not badly and rather unprofessionally “editing” them. Actually, presumptuously and imperiously “mis-editing” my articles best captures this whole exercise in willful and downright stolid enterprise.

Anyway, the Soyinka article, competently authored by a Mr. Rudolf Ogoo Okonkwo, readily reminded me of a book titled “Death and Pain in Rawlings' Ghana,” written by Mr. Mike Adjei, a quite remarkable and notable journalist and a good friend of my late father's from their University of Ghana days in the 1960s. In that book the author, who briefly sojourned in Nigeria as a political asylee, or perhaps even a refugee, emphatically and sneeringly highlights the fact of Nigerians being ranked among the most “title-craving” people around the globe. Almost every Nigerian male human who can boast of gonads between his thighs also wants his name to be publicly prefixed with “Chief.” In sum, personal modesty may be direly and stereotypically in short supply among Ghana's at once closest allies and rivals in the West African sub-region.

Anyway, judging by the at once bold and unapologetic title of Mr. Okonkwo's article, it was unmistakably clear that Prof. Soyinka craved absolutely no part of such titular obsession. Still the celebrated Nobel Literature Prize laureate, perhaps, need not have issued such a disclaimer, to begin with; and then so superfluously and dramatically to boot. Then again, being himself a dramatist of the foremost order, perhaps Prof. Soyinka could not help but simply “flaunt” his no-nonsense self and let the proverbial chips fall wherever they so desired. And after all, is not a doctoral degree, in just about any discipline, far more readily accessible to the avid seeker than a Nobel laurel and/or garland?

By the way, I am fond of telling this story to anybody who would listen; and it is simply the fact that long before I could even spell and pronounce the word “uncle,” I proudly predicted that if ever the globally coveted Swedish Academy's literary imprimatur were to be proffered any African, that artist of genius would be none other than the man that English and Literature students at the University of Ghana had nicknamed the “African Shakespeare.” And true to both form and substance, like the patriarchal Bard of Avon, this equally prolific and versatile Bard of Abeokuta routinely signs off his initials as “W. S.” And here must also be promptly observed the fact that there was, indeed, a “Mr. Kolawole Soyinka” quite awhile before there auspiciously emerged from the magical ashes of the proverbial phoenix, a Mr. Wole Soyinka.

Anyway, when he recently quipped before a large audience, composed of members of the Nigerian Lawyers Association, at New York City's Crowne Plaza Hotel, that he assuredly was a DD, “Doctoral Dropout” (an exuberant Soyinka enthusiast had misinterpreted it to mean “Doctor of Divinity”), the irrepressibly forthright Bard of Abeokuta could not have understated matters more. The fact of the matter is that when you are called Mr. Wole Soyinka, your cultural and institutional heft could never be over-extended. Besides, the price of diligently-acquired fame and fortune inextricably involves having status-enhancing myths routinely woven about one's inimitably heroic achievements.

Anyway, on her fortieth-birthday anniversary recently, my wife decided to take our family, joined by my elder sister and my two scholarly and connoisseur nieces, out to the giant neighborhood restaurant for a sumptuous dinner. And boy was the food “bonbonicious.” I even decided to carry home some leftovers, something I rarely do. Still, I feel the urge to readily confess, in retrospect, that absolutely no post-prandial prattle bests a meaty journalistic chunk on Soyinka. And the fact that such juicy “Soyinkaese” (pronounced “Shoinkese”) was passed up to me by my wife, a hitherto non-academic-oriented person, makes such repast all the more delicious. Then again, whoever said that academic bugs weren't that infectious, once you decided to truck with them?

*Kwame Okoampa-Ahoofe, Jr., Ph.D., is Associate Professor of English, Journalism and Creative Writing at Nassau Community College of the State University of New York, Garden City. He is a Governing Board Member of the Accra-based Danquah Institute (DI) and author of a forthcoming volume of poetry titled “The Obama Serenades.” E-mail: [email protected]