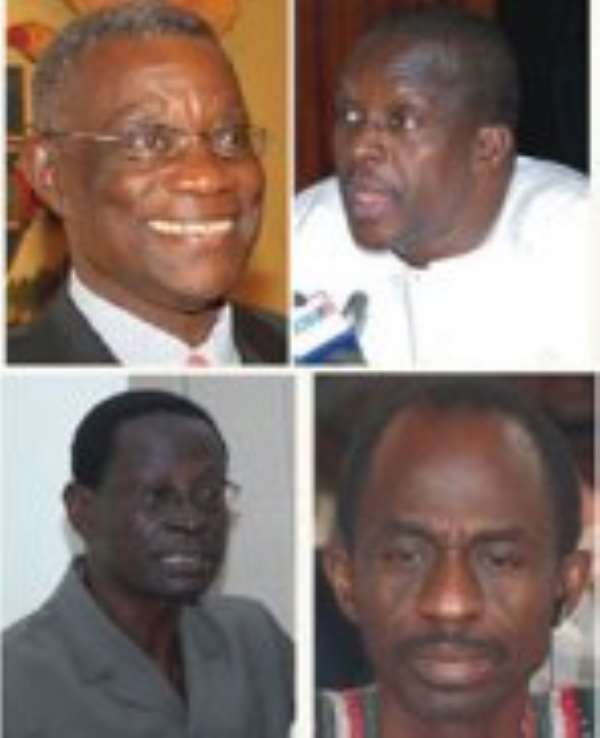 Key players within the National Democratic Congress (NDC) have held a crunch meeting, described by its General Secretary, Johnson Asiedu-Nketia, as frank, constructive and cordial, to heal what was festering between President Mills and some harsh critics within his own fold.

Absent at the meeting were former President J. J. Rawlings, his wife, Nana Konadu and Mr Harry Sawyerr, the Vice-Chairman of the NDC’s Council of Elders.

It is unclear whether former President Rawlings and his wife had been invited, but sources close to the party told the Daily Graphic that Mr Sawyerr had been indisposed, hence his inability to attend the meeting.

Sources close to the meeting said it was held in an open and frank manner as a platform provided by President Mills to the leadership of the party to raise their concerns.

They cited, for instance, the issue of not appointing experienced Members of Parliament as ministers, but President Mills was reported to have responded that it was because the party needed such hands in Parliament to provide guidance and leadership.

The President also explained to his party colleagues that not appointing someone a minister did not mean that person was irrelevant to the government.

According to the sources, some of the persons who had been heard on radio criticising the President claimed that the media had distorted what they meant to say, which in turn elicited counter criticisms from other party functionaries.

When contacted, the Presidential Spokesperson, Mr Mahama Ayariga, confirmed the meeting but would not disclose the issues raised, explaining that they were supposed to be purely internal matters.

He said the President had indicated, while he was in Tamale, that he would hold a meeting with the leadership of the party to discuss their concerns.

Mr Ayariga said the meeting ended amicably, adding that the commitment to participate in the meeting had been most crucial.

Asked whether the issue of Cabinet reshuffle had been discussed, Mr Ayariga said nothing of that sort came up for discussion.

Meanwhile, a statement signed by Mr Asiedu-Nketia said the meeting was used to discuss the most appropriate way of dealing with concerns expressed by some members of the party regarding the internal communication process and the channels for addressing members’ concerns.

“The discussions were frank, constructive and cordial and those present at the meeting made useful suggestions about deepening the process of consultation between the Executive and the various arms of the party,” it said.

It said members present at the meeting agreed that the discussions held had been very useful and they had provided the opportunity for the Executive to clarify a number of concerns that had been raised and also give other members in attendance the opportunity to express their opinions on recent developments in the run up to the party’s congress to be held in January next year.

The statement said a decision was taken to make those consultations between the government and the party more regular features in order to ensure that unity, internal cohesion and the focus on dealing with the development challenges facing the nation were maintained.

“It was also decided that there would be an outreach programme to touch base with Ghanaians everywhere in order to assure them of the government’s unity and focus to improve their living conditions and fulfil the NDC’s manifesto,” it added.

It assured all Ghanaians and members of the NDC that the party was committed to working with the President to ensure that “this NDC administration is able to perform successfully and fulfil its manifesto commitment to build a better Ghana for all Ghanaians”.

The Majority Leader, Mr Bagbin, was reported in the December 10, 2009 edition of the Daily Graphic as saying that President Mills had made a move to eliminate the bad blood existing between him and some senior members of the NDC.

He said President Mills had held a series of meetings with the NDC’s hierarchy to eliminate the mounting tension within the party, as a result of criticisms against his administration by his own henchmen.

The President has recently come under fire from NDC stalwarts such as Mr Bagbin, Mr Ekwow Spio-Garbrah, a former Minister of Information and Education in the first NDC administration, the Member of Parliament for Lower Manya, Mr Teye Nyaunu, and former President and founder of the NDC, Flt Lt Jerry John Rawlings.

Among the accusations levelled against the President by these critics were the style of his administration and the type of people he had surrounded himself with.

However, Mr Bagbin disclosed that the President had already met the chairmen of the various constituency branches of the party in the Greater Accra Region to discuss matters agitating their minds.

That meeting, according to Mr Bagbin, was held before the President left for Trinidad and Tobago to attend the Commonwealth meeting.