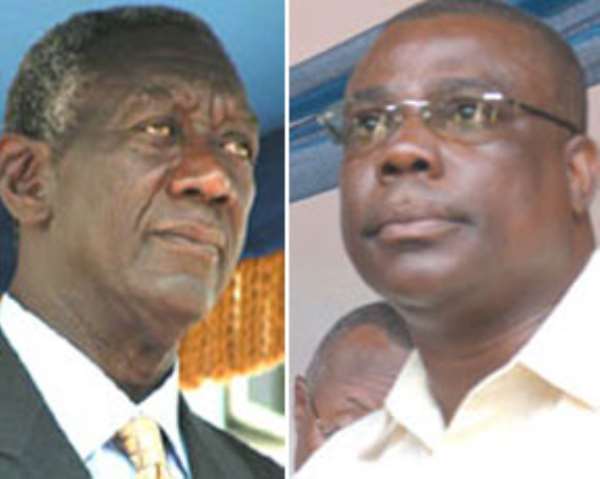 REPORTS REACHING this paper indicate that there will be fireworks at the meeting of the National Executive Committee (NEC) of the New Patriotic Party (NPP) today, following attempts by former President Kufuor to stop the supposed expansion of the Electoral College.

Mr. Kufuor has had series of strategic meetings with party bigwigs, the latest of which was held on Tuesday night in his house, where he tried to convince high ranking party members like Nana Akufo-Addo, Alan Kyerematen, Hackman Owusu-Agyemang, Prof Mike Oquaye, Yaw Osafo-Maafo, Akenten Appiah-Menka, Jake Obetsebi-Lamptey, Nana Ohene Ntow and Ama Busia, who is said to have his support for the national chairmanship position of the party, among others, to abandon the idea of expanding the party's Electoral College. But Chronicle sources at the party's headquarters say “no consensus has been reached yet.”

The former President believes the decision to expand the Electoral College would be too expensive a cost on the party, and it is not a feasible option now, because the party is just coming out of a painful election defeat.

According to sources at the meeting, the former President holds the view that the 'status quo' in electing party officers and flag bearer has served the party well since 1992.

Meanwhile, this paper has gathered that the former President had earlier met with NPP party legislators where he strongly kicked against the expansion of the Electoral College, and appealed for the support of the law makers to maintain the 'status quo'.

The National Executive Committee (NEC) and the higher body of the National Council held a three-day marathon meeting at the end of April, this year, where a wide range of proposals were discussed and agreed upon. These proposals were to be put before the party's national conference, which is the highest decision making body of the party, in its July 17 meeting.

The former President is, however, pushing for consensus candidates for the National Executive positions of the party.

To him, this will help the party's unity. However, his critics have doubted his intentions since he has rejected that the same procedure be applied to the selection of the presidential candidate.

The expansion of the Electoral College, its supporters say, will help the party in its mobilization efforts at the grassroots level, because it means transferring ownership of the party to the ordinary members.

The expansion could see about 10 ordinary members from each of the 22,000 polling stations across the country, taking part in deciding who leads the party.

As at yesterday, regional chairmen were descending on the capital for today's meeting. There was intense lobbying on both sides. Those known to be in support of the expansion of the Electoral College far out- weigh the number against it.

It is said that at the April 30th 2009 crucial meeting, there was no dissenting voice. The former President had traveled out of the country, but his views were made known by Kwadwo Mpiani, which were rejected.

Mr. Kufuor had also wanted the consensus chairman to appoint all the other national officers, but that was also rejected.

His critics fear this latest move is an attempt to get some larger control over the party.