Democracy delivers only when it is allowed to work 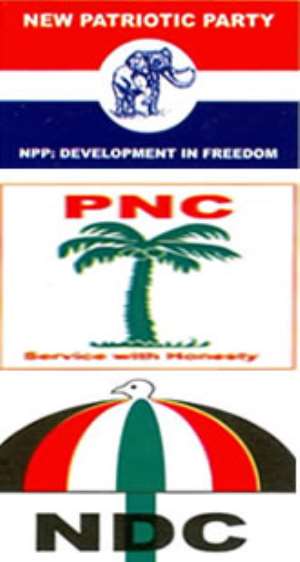 Who said lightning does not strike twice; our democracy has proved it wrong. And our hopes and aspirations are for it to strike a third time, a fourth etc., till death we part.

The 2008 presidential and parliamentary elections and the subsequent transfer of power for a second time, back-to-back civilian elected government, was a historical chapter in the political history of mother Ghana.

It is a rare achievement on a continent that is plagued by leaders who think that they have the God-given right to rule for life. No lesser person than the current Secretary of State to the Obama administration echoed what we've been able to accomplish, in the corridors of power in Washington during her confirmation hearing at the U.S. senate. About a month and half after the election, I met a Nigerian friend who was so fascinated about the milestone we have clocked, and the implication it has for his countrymen.

However, despite this glowing account, in a recent well-thought out feature article published on the ghanaweb by Francis Xavier Tuokuu, entitled 'Is Democracy Good For Africa?' he painted an anguish and disturbing picture, which warrants a closer look.

The crux of the piece is that democracy is a foreign import, and that any further flirt with it should be synthesised with indigenous African values, with our chiefs in mind. He also asserted that the 2008 elections only succeeded in dividing the country, and to be fair, there might be some truth in that.

On the other hand, the truth about his claims does not make his conclusions valid. In the premise of his argument, what he failed to grasp, was that democracy is not a garden of roses, neither for the faint-hearted. It is a difficult process, meant for only courageous citizens who are prepared to sacrifice and fight, not to destroy, but to build for the common good.

As I get older, I become more convinced that democracy, with all its faults, is the best form of government ever devised by man, and in my estimation, there is nothing wrong in importing a system that is delivering for a part of the human race.

It is very important to set the records straight, that democracy is not the first social system to be imported by our nation, and for that matter the people south of the Sahara. There is no single culture around the world that could claim cultural purity. All cultures, one way or the other, have had their brushes with foreign influence. Neither Britain nor the United States can claim the invention of democracy, it is the birth right of the Athenians. The Americans and the British borrowed and perfected it.

At the moment, there are certain things that those who are sceptical about our democracy will have to come to terms with. The fact is we have raised our expectations too high for our own good. Our democracy is only learning to crawl, and with time, it will learn to walk, and then eventually fly.

The wonderful process that takes place in America has been perfected for over two hundred years, and the British go for more than four centuries. Come to think about it, during the infancy of the American democracy, it nearly disintegrated into mob rule, to the extent that people like Noah Webster, one of the shapers of the American system, despaired and wished for the return of monarchical rule.

It could be recalled that it was due to the initial imperfections that led America to be drenched in blood eighty-five years after independence, to rid themselves of a cursed system that put a question mark on their constitution and democracy. It was during these trying times in the history of United States, that the famous quotation of Abraham Lincoln on democracy, which he quoted with a flourish, was delivered over the graves of the fallen at Gettysburg.

Discontent, according to an English proverb, is the first step in progress. The perceived division in the country should not be seen only in the negative kaleidoscope. It should be seen as an opportunity to address the root cause of those that are disgruntled. In doing so, we embark on the journey of perfection. Not too long ago, in Britain, the Labour Party was seen as a 'tax and spend party' – euphemistic phrase for wastage, which kept them in the political wilderness for 18 years.

They only achieved power when they made a fundamental shift to their constitution, and the re-branding of their image. The New Patriotic Party (NPP) has been scouring through every crevice and fissure to find out why they lost the last elections. And without doubt, they will find some answers that will be factored into their next campaign. Obviously, should the National Democratic Congress (NDC) lose the next election, they will definitely also go back to the drawing board to formulate new strategies to win back power.

By so doing, it is the electorate who ultimately win, because you win the hearts and minds of the electorate by meeting their needs. The drawing of the 1992 Fourth Republican Constitution was a watershed in the way we look into the future. People saw that there was every possibility for Rawlings to perpetrate his grip on power through the ballot box, hence the two-term limit.

The fears of the framers were realised when some of the supporters of the Rawlings clamoured for the amendment of the constitution for him to run for a third term.

Could anyone imagine how that move would have poisoned the political waters of the nation for years to come? The framers deserve our thanks.

In a similar vein this is how every problem in our democracy will be tackled and ironed out.

It is imperative to note that if our democracy is not delivering, we shouldn't make the mistake of thinking that a different style of government will do. Besides, there are many people, like myself, who wouldn't like to live under any kind of government that is not elected by the people.

What is happening in our country is larger than Ghana. We carry on our shoulders the dreams and hopes of all Africans, south of the Sahara. If we fail, the repercussions on the whole African continent will be too huge to contemplate.

Nkrumah once said: 'There is a new African in the world: that new African is ready to fight his own battle, and show that after all the Blackman is capable of managing his own affairs.' This is our opportunity to prove Nkrumah right by fighting to protect our democracy. It is difficult now, but ultimately, as the process picks up momentum, we will perfect it like the British and the Americans, when winning and losing becomes our second nature.