COMMENT: Is Rawlings Aware Of All That Is Happening? 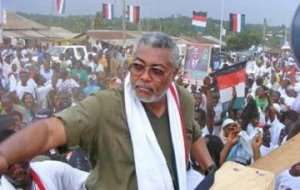 A Methodist Priest made my day yesterday, when I arrived at the office in the mid-morning. Rt. Rev. Stephen R. Bosumtwe-Ayensu, Bishop of the Obuasi Diocese of the Methodist Church, is inviting all Ghanaians to ask President John Dramani Mahama to tell the people, who chopped the flesh that has left the economy at the bare-bone stage.

The fact that the Rev. Minister's question has made it to the front page of this paper this morning, tells everything about the importance The Chronicle attaches to the question. For the uninitiated, Rt. Rev. Bosumtwe-Ayensu is telling Ghanaians that it is not enough for the President of the Republic to tell Ghanaians that the economy is down to bare-bones and just go to sleep.

How come the centre of the economy could no more hold after the roof-top advertisement of building a Better Ghana? Could anybody build a Better Ghana when the economy is on its knees? I do not believe all the miracles of Bishop Charles Agyin-Asare, T.B. Joshua, Ebenezer Adarkwa-Yiadom and Bishop Obinnim combined, would work the kind of magic needed for this country to be rich again in the near future.

Like someone said the other day, even the marrow in the bones are being fleeced away with dubious policies like investing in guinea fowls, which are said to have migrated to Burkina Faso after GH¢15 million of state money had been sunk into a private venture, through the Savannah Accelerated Development Agency.

When an additional GH¢33 million goes into the drain, via an afforestation project that sees the newly-planted trees withering in the dry season, it calls the motives of those who are dispensing state resources in the name of such ventures into question.

With all that is happening, it is surprising that Flt. Lt. Jerry John Rawlings has maintained a cemetery silence. The self-appointed apostle of Probity and Accountability and former military junta head, who employed the intimidating powers of the gun to rise to become head of state of this Republic, and even in retirement tormented the late Prof. John Evans Atta Mills and his administration on corruption and under-hand dealings, has strangely remained mute since Mahama was sworn in last January as Head of State of this Republic.

Some of the happenings in this administration, in my opinion, are strange, to state the least. I cannot speak for someone like Alfred Agbesi Woyome, the man who benefitted from a state dole-out of GH¢51 million. As a Ghanaian, I am irritated by his ability to look at Ghanaians in the face and suggest that there are demons out there intended on destroying him, when, in fact, he has aided the destruction of the state economy by fraudulently claiming GH¢51 million without any evidence of a contract, let alone, any job done on behalf of the state.

At the weekend, Mr. Abgesi Woyome called a section of the media to his house and claimed that a group of demons were responsible for his plight. 'What kind of demon has possessed people in this country that they don't want their own colleagues to help in building this country?' Woyome asked rhetorically at the media encounter.

Mr. Woyome alleged that he could have even made the list of Forbes list of the rich and famous, but for the fact that some people in both the ruling National Democratic Congress and the opposition New Patriotic Party, possessed by demons, were pulling him down.

There are no prizes for guessing why Mr. Woyome is making these ugly noises. He has apparently weighed the government and reached the conclusion that some people in authority could be so tainted by the events leading to the GH¢51 million dole-out to him that they are now powerless to act.

In any serious society, Woyome would have coughed out the money and by now cooling it off at Akuse, Sekondi or the Nsawam Medium Security prisons. In societies where the rule of law has a firm foundation, he would have been punished together with all those who aided the illegal payment.

At the Finance Ministry, former Minister Dr. Kwabena Duffuor, his two deputies, as well as scheduled officers who worked on the payment, would all have had a lot of questions to answer. For me, as a social commentator, I do not buy the crap that the deceased President John Atta Mills did not know how the money was paid.

I do not believe it would be difficult to establish who gave the executive order for the money to be paid. I can state without any contradiction that the final authority came from the deceased President. Dead men do not talk. That is the maxim. But, in this instance, evidence would be led to prove that it was the former President who gave the final approval.

If the state of Ghana is serious about getting to the bottom of the matter, there are men and women in and out of this administration who have knowledge about how things panned out. I am sorry, but I do not buy the story bandied about by the Economic and Organised Crime Office that the deceased President did not know about how the money was paid, and that when the late President Mills learned about the dubious payments, he tried to stop it twice.

My information is that the late President was surrounded by some of the hawks in his party who stood to gain by the whopping payment to Woyome, and convinced him to give the authorisation for the payment. It was at the time the deceased President was battling with his terminal decease.

In his desire to get those hawks off his back, Prof. Mills was said to have okayed the payment. Whatever it was that led to this huge loss to the state, it tells something about how protective the NDC was, and has been with the public purse.

The desire for a cut in the deal obviously clouded the judgment of those who brokered the deal. That is one reason why Woyome should be advised to shut up and not open the wounds of many Ghanaians over the huge payment.

The GH¢51 million doled out to the NDC financier is definitely more than the GH¢41 million our doctors were asking for, and which led to paralysis in health delivery in Ghana. The doctors' problem has still not been resolved, and unless the government finds that amount of money to settle our doctors pretty soon, our doctors would be forced to abandon the wards and their consulting rooms again.

I lost my auntie, Yaa Donkor, to the doctors' strike. There are many Ghanaians out there who are in various states of mourning as a result of a dear one or two kicking the bucket during the one-month strike by public medical officers.

If the Woyome loot could be retrieved, it would go a long way to resolve a few conflicts in society.

In my opinion, the huge payment to Woyome sums up the free spending mentality of an administration, which has supervised over one of the most miserable times in the lives of Ghanaians.

Even the President's word could no more be trusted. The Dum-so Dum-so is still very much alive. The simple reason is that the Government of President John Dramani Mahama is unable to resource the Volta River Authority to meet the demands for something as basic as crude oil to power the Aboadze Thermal Plant to its full capacity.

In the midst of all this gloom, the government, we are told, overspent the budget by a whopping GH¢8.7 billion in the year 2012. Even the Presidency, which should normally be a check on profligate expenditure by officials in the administration, overshot its budget by as much as GH¢600 million.

In all this, Dr. Boom is taking a leave from the three wise monkeys. Tongues are already wagging on why the man who slaughtered eight top military officers, including three ex-heads of state, at the Teshie Military firing range, and conjured integrity, probity and accountability to underpin national politics, is seeing no evil, hearing no evil and speaking no evil about the Mahama administration.