The bogus STX Korea deal is more political than rational 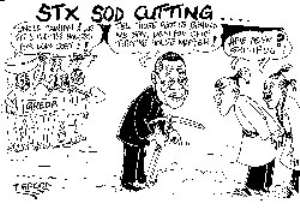 Ebo Quansah on the beat The political game in Ghana has a side effect of providing comic relief. I would like to believe it is the comic aspect of the serious business of managing this nation that has seen Ghanaians through all kinds of turmoil since Osagyefo Dr. Kwame Nkrumah declared this nation-state independent of British colonial rule in the wee hours of March 6, 1957.

On Thursday, February 17, 2011, the President of the Republic went before the House of Parliament and read the State of the Nation address. Prof. John Evans Atta-Mills talked about many achievements of his administration that made him believe that the 'Better Ghana Agenda' sold to Ghanaians on the campaign trail, was on course.

Among the many achievements highlighted was the announcement that through rationing of water, the perennial water problem at the Adentan Municipality in the Greater Accra Region had been solved. The announcement did not go down well with many residents, who claimed that the President might have had his facts wrong.

One week after the announcement, Minister of Water Resources, Works and Housing Alban Kingsford Sumanu Bagbin, took an entourage of technocrats and newsmen to the community to assess the situation for himself. The interesting thing about the visit is not that it was the first time the Minister had visited. It was why he did not come to assess the situation before briefing the President.

As it was, the Head of State made the announcement that water was flowing at Adentan without a proper analysis of the situation.

I am beginning to get the vibes that the Head of State might not have been given the proper briefing before cutting the sod to signal the beginning of the construction work on the STX Korea deal, under which a construction firm from South Korea has been contracted to provide 200,000 housing units for the Republic of Ghana, at an extravagant cost of $10 billion.

There cannot be any single project in this Republic that has cost that much. That is as true as today is Wednesday. We are told that the project is being undertaken in two phases. The first project, for which the President cut the sod about one month ago, involves the construction of 30,000 housing units for use by the security services.

The 30,000 housing units, we are told, would cost this nation $1.5 billion. At that cost, it is the single most expensive venture ever undertaken in this land of our birth. That is not even the problem. The real issue, which unfortunately, appears to have been ignored in the mad rush to ensure that there is something to show for that huge expenditure, is that we could have acquired the 30,000 houses for far less than what the state is obliged to fork out. The Ghana Real Estate Development Association (GREDA) offered to build the 30,000 housing units for $750 million, but was waved aside.

Last Monday, the media was saturated with the information that the State of Ghana would need an extra $168 million to be able to complete the Bui Hydro-Electric Project. We are told that the project, including the dam and quite a number of resettlement townships, was originally penciled to cost the Ghanaian tax payer $622 million. Even with the additional requirement, the provision of 400 megawatts of electricity, a dam to aid the irrigation of the semi-arid lands of the three northern regions and parts of the Brong Ahafo Region, would not cost even half the proposal to provide 30,000 units of housing for the security services.

In fact, the cost of the three hydro-electric projects in Ghana, Akosombo, Kpong and Bui combined, cannot match the $1.5 billion asking price for providing the security services with 30,000 housing units. This is where my problem lies.

I cannot believe that after providing the Korean construction and engineering firm with free and already laid out landscape, with swell-laid out streets, electricity, water, and all necessities to make the place comfortable for residents, providing the Korean company with a sovereign guarantee to source for loans for the project, which itself is collateralised on resources from our new oil find, the state of Ghana would still have to fork out $250 million as insurance cover for the project. Incidentally, we are not told anything about the insurance brokers.

In all honesty, I cannot believe that it is out of the need to provide houses that the agreement is so skewed against Ghana in favour of the Korean company. What is it that is making the nation go out of the norm to shower all these goodies on the company from the Far East?

Ghanaians have been building our own houses since time immemorial. We have a Government in place, which claims to believe in the Ghanaian's ability to cater for him or herself. To add to the drama, we have a sitting Head of State who says he believes in Osagyefo Kwame Nkrumah's concept of self-reliance. Prof. John Evans Atta Mills claims to so believe in the Ghanaian's ability to cater for himself, that in 2008, the then presidential candidate went on a demonstration through the streets of Accra, carrying a placard with the inscription: 'GHANAIANS ARE CAPABLE OF MANAGING OUR OWN BUSINESSES.'

This was when the New Patriotic Party administration of ex-President John Agyekum Kufuor decided to sell Ghana Telecom to the British conglomerate, Vodafone.

One is tempted to ask what has happened between 2008 and 2009, when the State of Ghana decided to partner STX Korea to provide houses for Ghanaians under such ridiculous terms.

All equipment brought in from abroad for the contract, are to attract zero taxation. That is not the only worrying aspect of the contract. The contractors and workers flown in from Korea, or any part of the world for the project, are not supposed to be taxed. Anything purchased locally in the name of the project, ought not to attract Value Added Tax (VAT) or any other tax in this land of our birth.

When I complained about the terms of the contract, I received a rejoinder from the Ministry of Water Resources, Works and Housing, signed by Alhaji Ziblim Yakubu, Chief Director. The rejoinder failed to explain why the state of Ghana should go to this ridiculous extent of signing a contract that was heavily weighed in favour of the contractors, to the detriment of the nation.

Some of the explanations provided in the rejoinder would not convince a 10 year-old school boy, why the state should virtually throw resources at the Koreans. As was contained in my rejoinder to their rejoinder last week, the Ministry wondered why GREDA, the local real estate developers association, should wait all this while before expressing interest in the project, when they have been around all the time. There was an analogy between an apple and an orange, which are all fruits, but do not cost the same.

Read what, obviously, is the justification for the project, contained in the Ministry's rejoinder. 'The benefits of this project are numerous, as it will, among other things, present a major boost to the morale of our men in uniform, to continue to make Ghana a free and safe country. It will also lead to an increase in staff strength of our security services for better enforcement of discipline, training, and spirit de corps. Enormous job opportunities will be created for our local contractors, consultants, and artisans, just to name a few.'

I appreciate the fact that Ghana may not have the funding for such a project. I also wonder if the project would not have been cheaper, if this country had borrowed the money on the international market place to engage local contractors on the project.

Read this part of the rejoinder signed by the Acting Chief Director. 'The exciting adventure of the long-awaited GOG/STX Housing Project is now a fait accompli. The Water Resources, Works and Housing wishes to reassure all Ghanaians and other stake-holders that the Government of Ghana and our Korean partners remain solidly committed to this landmark housing project. The contractual agreements, which have been endorsed by Parliament of Ghana, remain binding on all parties, and cannot, and will in no way, be compromised for the sake of political convenience.'

When the 'foolish and baloney' speech from Vice-President John Dramani Mahama to the Tertiary Education Institution Network of the National Democratic Congress, at the former Ideological Institute at Winneba, sent the majority side stuttering to Parliament to give the obnoxious deal the Parliamentary seal of approval, it said a lot about the political leanings of the project.