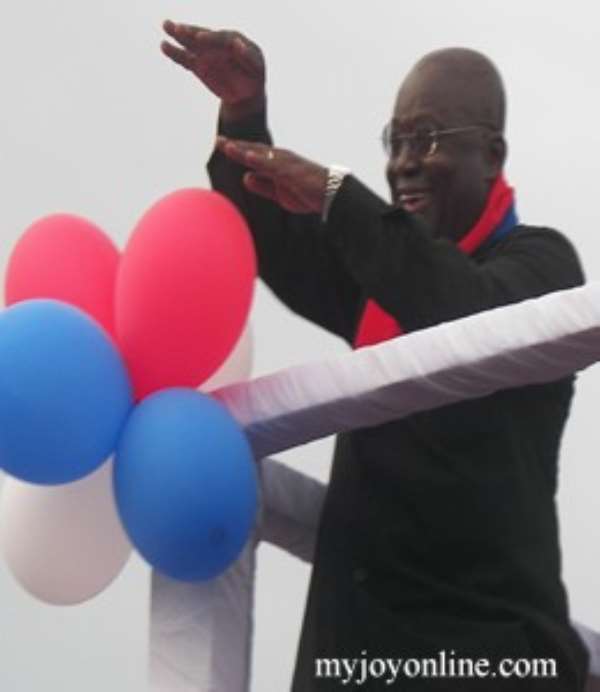 The NPP presidential candidate for Election 2008, Nana Addo Dankwa Akufo-Addo has lashed out at the ruling NDC for disappointing Ghanaians.

In a speech at a press conference that sought to prescribe fixes for what he said had been a drowning economy, Nana Addo said the Mills-led National Democratic Congress government had failed to fulfil its numerous campaign promises on the backs of which the party won power.

The Election 2008 NPP flagbearer delivered the over-forty-minutes' speech amid cheers from the hundreds of supporters and sympathisers who had thronged the Osu Presbyterian Church Hall.

Nana Addo's comment which is his first public speech after the new government took office, is also a prelude to a press conference in the US which the international press is billed to attend.

He said while the citizenry expected the NDC to foster peace and security in the country, the ruling government had rather taken to vilifying members of the opposition.

He recounted instances where he said arson attacks had been launched at members of the opposition.

He cited an incident at Tamale in which a 19-room apartment of a sympathiser of the NPP was razed by an alleged NDC mob while the owner of the property was left with severe matchete wounds.

Commenting on President Mills' 100 days' promises, Nana Addo said none of the assurances from the then candidate Mills were translated into action.

He said Ghanaian now have a strong sense of insecurity and members of the opposition might be forced by circumstances to defend themselves in the event of attacks on them.

While President Mills promised 40% of his appointments would go to women, he said, the president has failed miserably.

Nana Addo also scratched the perennial Abudu-Andani Dagbon conflict which he said is currently being controlled by the state machinery.

He alleged that while the Abudu gate had been prevented from entering the old Gbewa Palace at Bawku, the Andani gate which is thought to be aligned to the NDC was guarded days ago to perform rituals there, much agains the counsel of the group of eminent chiefs and directions
of the roadmap to peace in Dagbon.

The former presidential candidate said such acts amount to a direct manipulation by the state machinery in a traditional matter and that threatens the wellfare of the people of the area.

The cedi, he said is now in a free fall, losing to most of the major currencies by whopping margins, since the NDC assumed control of the state five months ago.

Nana Addo said the current inflation levels have led to a high cost of living.

He said a tuber of yam which sold at GHc1.50 in December last year now sells at GHc3.00 while an American can of 'gari' which previously sold at GHc1 is sold at GHc1.60.

"This is a practical effect of a growing inflation," he stated.

Nana Addo said instead of a lean government, President Mills has managed to secure a "lean kenkey" for the people.

He described as interesting president Mills' self-asppraisal effort in which he score for himself a high mark of 80%, even in the face such an unsavoury trend of affairs.

Nana Addo alleged that the NDC, struggling to manage the economy, has rather taken to blaming the Kufuor administration for the current state of the economy.

He challenged the NDC to develop policies to better the lives of Ghanaians, stressing, "I say to President Mills today, if you say the system is broke, fix it."

Nana Addo pledged the NPP's unflinching support if the NDC will take steps to alleviate the suffering of Ghanaians.