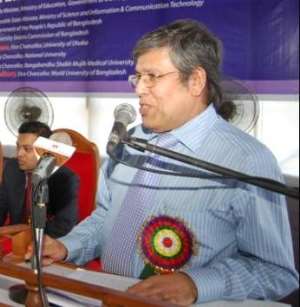 "If you want to be a self reliant person, a responsible member of your family and your country as well as a respected personality of your society, you have only one alternative that is you must have utilitarian education for economic emancipation." It is the massage for the students from Professor Dr. Abdul Mannan Choudhury, the current vice chancellor of the World University of Bangladesh (WUB).

Professor Dr. Abdul Mannan Choudhury, an alternative name of “Live defender” served in University of Dhaka as a professor for 37 years. Professor Choudhury was born in a successful family in Comilla district of Bangladesh. He passed his education life in Comilla, Dhaka, Manchester and London. He got his higher education in Master of Business Administration from Manchester Business School, PhD from London. He also served Bayero University, Nigeria as Head of Department, Academic Dean and Syndicate Member. He was the Proctor of Dhaka University, Syndicate Member of Dhaka University, Member of Finance Committee, Founder Director of Evening MBA study, Founder Chairman of Department of MIS, Founder Chairman of National Management Association, Bangladesh Commerce Education Society and Founder Chairman of a Government Bank of Bangladesh. He is also an excellent writer and columnist. Dr. Choudhury was a freedom fighter too. He was the Assistant Commander (and was commander for few months) of Mujib Bahini (Bangladesh Liberation Force) of eastern side of Bangladesh in the 1971 Liberation War of Bangladesh.

Former President of People's Republic of Bangladesh & Chancellor, WUB and Professor Dr. Abdul Mannan Choudhury at a convocation of WUB

Earlier Career of the 'Live Defender' Abdul Mannan Choudhury:
Dr. Chowdhury has a strong background. He is not only a professor or freedom fighter but a strong part of the history of Bangladesh. He was directly involved in 1962 education movements and 1963 Comilla University establishment movement.

Following Suhrawardy's death in 1963, Sheikh Mujibur Rahman came to head the Awami League, which became one of the largest political parties in Pakistan and In 1966, Mujib proclaimed a 6-point plan titled “Our Charter of Survival” at a national conference of opposition political parties at Lahore, in which he demanded self-government and considerable political, economic and defence autonomy for East Pakistan in a pakistani federation with a weak central government.

Abdul Mannan Chowdhury was a strong supporter of these six points' movements. On the 7th June 1966, the day of hartal, young Abdul Mannan proclaimed his view in at front of High Court, Dhaka. Police attacked him. But Leader Abdur Razzak saved his life for that time. He was also involved in eleven point's movements in 1969 and was strong associate of Shaheed Abul Asad. In order to realize the eleven point demands and to protest against the repressive measures upon the student-messes by the Police and EPR and against the violation of the sanctity of the University, the Central Student Action Committee, from a meeting held at Dhaka University Battala on 17 January. He called for a complete strike in all the educational institutions of East Pakistan on 20 January, 1969. To face the situation, the government imposed Section 144, prohibiting the assembly of more than four persons. Disregarding the imposition of 144, students of different colleges assembled at the varsity campus and after a brief meeting nearly ten thousand students brought out a procession at about 12 noon by violating Section 144. When the procession reached near the then Post Graduate Medical College (near Chand Khan's bridge), the police charged upon the procession. After clashes for nearly an hour, some students including Asad, Abdul Mannan Chowdhury and some other students tried to lead the procession towards the centre of the town by the side of the Dhaka Hall. In this situation, one police officer killed Asad by firing from his pistol from a very short distance as a result Abul Asad was died, young Abdul Mannan Chowdhury was in very close distance of Shaheed Asad but luckily he escaped from being shot and still alive.

According to a book of Tikka Khan and as per statement of journal and newspaper of that time, Dr. Chowdhury was a trainer of 1971 training for liberation war. As a result, on the 3rd March 1971 Dhaka University teacher's forum raised their voice against Pakistan for freedom. Tikka Khan wrote in his book, “Mr. Chowdhury only the university teacher who trained guerrilla battle from Dedarun, then he joined liberation war of Bangladesh under Mujib Bahini”.

Mujib Bahini was a special force created by the Awami League and composed of 60,000 young supporters of the liberation movement. It was organised with the active assistance of Major General Oban of the Indian Army. Leaders of Student League Serajul Alam Khan, Sheikh Fazlul Haque Mani, Tofael Ahmed and Abdur Razzak were the organisers of this special force. Mr. Chowdhury was the Assistant Commander (and was Commander for few months) of eastern side of Bangladesh of Mujib Bahini in the 1971 liberation war of Bangladesh.

Honorable Vice-Chancellor of WUB Professor Abdul Mannan Choudhury, PhD addressing at the Fresher s Reception
In 1992, Mr. Chowdhury was actively member of action committee of “punish war criminal” movement and closely worked with Shaheed Janoni Jahanara Imam. After retirement from Dhaka University's 37 years professor's life, he has been serving the World University of Bangladesh as a Vice-Chancellor.

Professor Dr. Abdul Mannan Chowdhury's life at a glance:
1. Had a first class academic career even though he was involved in Education movements of 1962, Comilla University Establishment Movement of 1963, Six point Movement of 1966 (he was almost annihilated by point blank police fire while he was picketing on 7th June hartal in front of the old high court and Curzon hall juncture).
2. Elected member of the F. H. Hall Students Union.
3. Served as Secretary of the Commerce Association of Dhaka University.
4. Literary Secretary, General Secretary and President of the Shilpo-O- Sahitya Sangha consecutively.
5. Participated as an activist in the eleven points Program of the Students Action Committee, 1969;
6. Raised and read out the Resolution for Independence instead of regional autonomy on 3 March, 1971 on behalf of Dhaka university teachers.
7. Was one of the 128 signatories to press demand for stopping genocide in Bangladesh, 1971.
8. Editor of "Weekly Bangladesh", 1971.
9. Trainer of liberation war, 1971.
10. Was Deputy Commander and Commander for short period of Mujub Bahini, Eastern Command (Bangladesh Liberation Front,) 1971;Coordinator on behalf of Mujib Bahini in the Joint Command.
11. Participated in restoration of Civil Administration at Comilla on 9th December 1971;
12. Lecturer (Before the start of liberation war) to Professor, University of Dhaka, Bangladesh (37 years);
13. Academic Dean and Head of Department of a faculty and a department of Bayero University Kano, Nigeria.
14. Member-Secretary, Co-ordination Committee for the Trial of the Killers and collaborators of 1971.
15. Vice- Chancellor, World University of Bangladesh (WUB) at present.
16. Advisor of the Honourable Prime Minister Sheikh Hasina to the Jatiyo Muktijodda Council (at present).