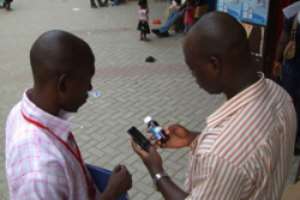 DAKAR, 19 March 2009 (IRIN) - Pharmaceutical drug counterfeiters can foil even the most sophisticated technology if consumers cannot personally verify their medication's safety, according to Ghanaian entrepreneurs who will soon introduce in West Africa verification via cell phone text.

Consumers who purchase certain medications will be able to send the label code via free cell phone text message and within seconds receive a text response from the drug manufacturer of whether the drug is legitimate and comes from a safe batch.

The UN World Health Organization (WHO) estimates that up to 30 percent of pharmaceutical drugs sold in developing countries are fake.

Co-founder of the anti-counterfeit technology company mPedigree, Bright Simons, told IRIN that until now anti-counterfeit tactics have not empowered the consumer. “Consumers are the final decision-makers as to what medication they take, but they have not had a way to verify their medication's safety.” He said existing nano-particle tags, ultraviolet-sensitive labels and holograms do little to enable consumers to protect their health because counterfeiters can reproduce them.

“But if you have more consumer vigilance,” said Simons, “That will be harder to get around.”

Simons co-founded mPedigree, which was named a 2009 Technology Pioneer by World Economic Forum, with Ashifi Gogo in 2007.

Test
Working with anti-counterfeit experts, mPedigree recruited a local drug manufacturer in Ghana to label 3,500 boxes of its anti-malarial medication. According to the Ministry of Health, 40 percent of the medication in Ghana is locally manufactured and 65 percent of patient consultations are for malaria.

From January to March 2008, some 3,000 customers sent text messages to check their medication. Within an average of three seconds, they received an “OK, quality assured, genuine product” message on their cell phones, said Simons.

Asked whether Africa's mobile networks would be able to handle the increased text traffic, Simons said the infrastructure is sound. “It is the voice band that is overloaded. Data services are more efficient.” He said there are 10 million cell phone subscribers in Ghana of an estimated population of 23 million, according to the 2006 government census.

Simons added that popular reality shows in Ghana have accustomed viewers to sending text messages, with one show receiving some 250,000 messages a month.

Over the past year, mPedigree has worked with the governments of Nigeria and Ghana to launch the technology with more medications in the coming months.

Drug manufacturers
WHO has warned of growing drug resistance as a result of fake products that thwart epidemic control.

Simons told IRIN drug manufacturers have responded positively to the promise of recruiting millions of watchdog consumers. “Counterfeiters can match law enforcement in terms of money and numbers. But they cannot beat back millions of consumers [trained] to watch out for themselves.” Participating manufacturers would cover the cost of texting and drug labelling.

Simons said each medication package will come with a unique code; once a code has been entered, no second drug label bearing that code will return an “OK” message. “Counterfeiters' income declines, drug manufacturers' income increases and prices come down for consumers.”

WHO estimates that drug companies lose tens of billions of dollars in profits every year because consumers purchase fakes.

Simons dismissed Ghanaian health authorities' concerns that counterfeiters will be able to create a parallel phone number that provides false information to consumers.

Likening mPedigree to the widely-used information internet product, Wikipedia – whose founder is advising mPedigree – in which readers upload content and check others' submissions for accuracy, Simons told IRIN messaging has the potential to defeat counterfeiters.

“The ability of so many people to keep an eye on the system- there will literally be millions of consumers banding together- is what makes this system work.”

If They Like, They Should Boycott The Voter Registration – J...
43 minutes ago