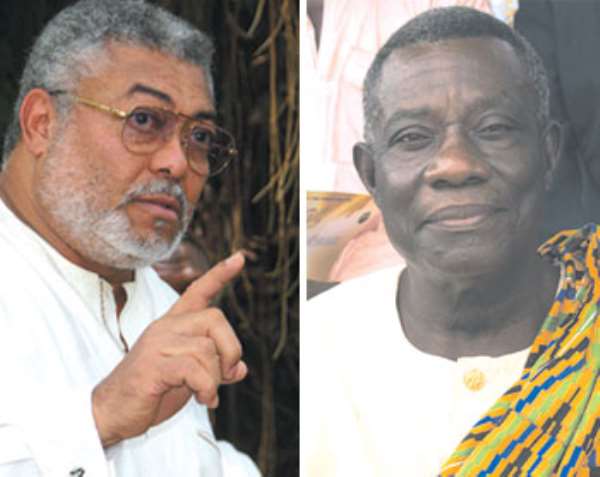 Jerry John Rawlings (JJ) must understand that being the founder of the NDC does not make him the President of Ghana. John Atta Mills (JAM) is the President and this must be sunk into JJ's head. JJ is entitled to his opinion and lunatic BOOM speeches, but JAM does not have to listen to him. JJ must understand that he did not elect JAM to be president, WE, the people of Ghana, did and , therefore, JAM owes his allegiance to the people of Ghana and not to the despotic and corrupt JJ, who like everyone of the other politicians, according to JJ,

Rawlings, you yourself did not own a bicycle before you staged the infamous coups and lorded yourself over poor Ghanaians, you could not even pay for the Yokor Gari you credited, yet today, you boast of more than six bullet proof cars, several luxury houses dotted across the country, several speedboats in the seas of Ghana and your children attending schools abroad - all funded by his so called “ghost friends” – inadvertently, money stolen from Ghana's coffers while you were at the helm of affairs – an excuse which would have landed someone staring into the barrel of the gun during your infamous coup days while the ordinary Ghanaian continue to suffer in abject poverty. Please stop being a hypocrite. You cannot fool Ghanaians again. You are the same as, if not worse than, the crooked politicians you are pointing accusative fingers at. You should be ashamed and guilty of saying what you said

JJ doesn't get it. Ghana does not belong to him. He killed so many, but ironically, he is afraid to die. JJ is the most cowardly soldier I have encountered. During the coup uprisings that brought him to power, he was hiding under a bed in someone else's house, according to a book recently written by one of the insiders of those coups.

JAM needs to diplomatically ignore JJ's rantings and concentrate on his presidency and how to move Ghana forward. JAM has nothing to lose. After his successful term in office, he can peacefully retire and forget about JJ. The NDC party equally belongs to all NDC members, and no one, I say “no one” should KOTOW to the selfish and wicked intentions of JJ.

If JJ continues to distract the administration with his childish temper tantrums dubbed as BOOM speeches, he will leave the administration no choice but to sideline him or to be totally ignored. JJ must realize that JAM is the president and not he JJ. If JJ wants to be taken seriously, he must be an advisor to JAM in private and not castigate him on the public airwaves or second guess him. JAM is JJ's president and he can do nothing but to accept it and accord him the respect he is due. Nobody disrespected him by mounting public forums to attack his character when he JJ was president so why should he think it fit to do this to JAM, even within the first week of his presidency? JJ, you must know that if it were not for the freedom all Ghanaians enjoy, this action of yours could have been interpreted as treason under you governance. Please respect Ghana's president. If you not behave as a statesman and continue to behave arrogantly, you will be reminded as only a secondary/high school graduate who forced your way through the barrel of the gun and you do not know any better than most Ghanaians and that Ghana will never allow that to happen again.

Place Rawlings on positive side of Ghana’s political history...
4 minutes ago