Election 2008 kicks off on Tuesday with Special Voting 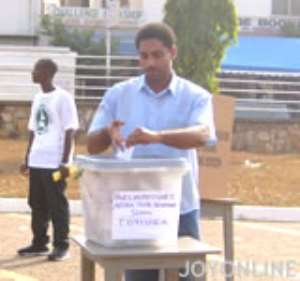 Election 2008 kicks off officially on Tuesday, December 2, with special voting by those who would be on duty on Election Day, Sunday, December 7.

Special polling stations have been mapped out by the EC for the exercise and voting starts at 0700 hours and ends 1700.

In an interview with Ghana News Agency in Accra on Monday, Mr Albert Kofi Arhin, Director of Elections, said the Commission was ready to kick-off Election 2008 with the special voting on Tuesday.

“All logistics and personnel are ready to ensure a smooth start of the election,” he said, and appealed to the public to adhere to all electoral rules and regulations.

He said after the Special Voting, the ballot boxes, which would be sealed before voting starts, would not be opened. They would be transported to safe places for storage and opened only after the general population voted on Sunday, December 7.

The vote will see the successor of President John Agyekum Kufuor, who ends his second four-year term on January 6, 2009.

According to the EC the positions would be the same for Parliamentary candidates, with independent candidates coming after candidates of the political parties in alphabetical order.