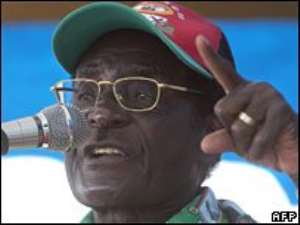 Zimbabwe's President Robert Mugabe has threatened to force businesses to cut prices ahead of the 29 March elections. Prices have again shot up after Mr Mugabe awarded huge pay rises to teachers and civil servants last month. "We are going to read the riot act to them [businesses]," he told a campaign rally in Hwange. The government last year ordered prices to be reduced, leading to widespread shortages. Zimbabwe's annual inflation rate is 100,000% - the world's highest.
The state-owned Herald newspaper reports that Mr Mugabe has ordered business leaders to attend a meeting with government officials.
"We want them to reduce prices to those which were in effect before the salary hike," he said.
He said that anyone who refused to co-operate would be nationalised, through the new Indigenisation and Empowerment Act, under which businesses are supposed to be majority-owned by black Zimbabweans.
Mr Mugabe says white-owned businesses are raising prices in order to reduce his chances of being re-elected. The businesses say the official prices are below the cost of production. Some 12,000 people were arrested last year for selling goods at above the official prices.
'Wasted vote'
In another rally, Mr Mugabe also said the main opposition Movement for Democratic Change would "never" take power. "Those who want to vote for him [MDC leader Morgan Tsvangirai] can do so but those votes will be wasted votes," he said in Bulawayo, an opposition stronghold.
Mr Tsvangirai has accused Mr Mugabe of planning to rig the polls. Mr Mugabe's ministers have denied such allegations.
Former Finance Minister Simba Makoni is also challenging Mr Mugabe and told the BBC that so many people would vote for him that it would be difficult to rig.
"It will not be easy to steal the election. It's not impossible," he told the BBC's Network Africa programme.
"People are desperate to stay in power. They will do anything and everything they have to do."
The US and the European Union accused Mr Mugabe of rigging previous elections - charges he denied. Western monitors have been barred from this election. African election observers were less critical and they have been invited.