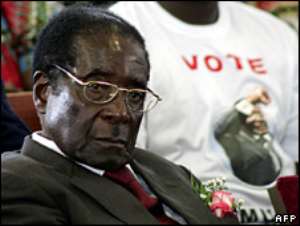 The leadership of Zimbabwean President Robert Mugabe's Zanu-PF party is due to meet to discuss strategy and the likely results of the presidential election.

Reports say the 49-member Politburo is split on whether Mr Mugabe should fight on amid claims by opposition leader Morgan Tsvangirai that he has won.

The election commission must announce the presidential election result by the end of Friday to meet a legal deadline.

Earlier, there were growing signs of a clampdown on the opposition and media.

At least two foreign journalists were also arrested in a raid on a hotel in the capital, accused of working without accreditation. One of them is the Pulitzer Prize-winning New York Times journalist, Barry Bearak.

The BBC's Grant Ferrett in Johannesburg says this could be the start of the campaign for a possible election run-off, which would be held if no presidential candidate gains more than 50% of the vote.

He said the raids were intended to have a cooling effect on the opposition and the media.

The meeting of Zanu-PF's politburo, expected to be chaired by Mr Mugabe and convened at around 1000 (0800 GMT), comes two days after the ruling party lost its majority in parliament for the first time since independence in 1980.

The MDC took 99 seats, while the Zanu-PF party won only 97. A smaller MDC faction, which backed former Mugabe loyalist Simba Makoni in the presidential election, won 10 seats, leaving them with a potentially influential future role.

Late on Thursday, the Commission released the first results in the election for the senate, the country's upper house of parliament.

The ruling Zanu-PF party and the MDC have five seats each.

Under the country's electoral laws, results for the 60-seat senate, the upper house of parliament, must precede those of the presidential election, although the commission is also legally required to announce the results of both within six days.

The MDC said on Wednesday that its leader had won 50.3% of the vote to Mr Mugabe's 43.8%, though Zanu-PF denied this.

But those figures differed slightly with the Zimbabwe Election Support Network, a coalition of civil society organisations, who said Mr Tsvangirai had won 49% to Mr Mugabe's 42% - meaning a run-off would be required within three weeks.

Mr Mugabe is believed to have called the meeting of the Zanu-PF's politburo to "explore what went wrong" and gauge how much support there was within the party for him running in a potential second round, party sources said.

However, Deputy Information Minister Bright Matonga has said that if results from the presidential poll showed a second round was necessary, Mr Mugabe would definitely stand.

"President Mugabe is going to fight to the last, and he's not giving up, he's not going anywhere, he hasn't lost the election," he said.

Mr Mugabe made his first public appearance since the elections on Thursday, when he was shown meeting election observers from the African Union in Harare on state television.

Mr Tejan Kabbah said he had also met Mr Tsvangirai, according to AFP, prompting further speculation that some form of African mediation effort is under way.

South Africa's president also said he had held talks with both leaders on the phone, and urged them to respect the outcome of the official results.

"If indeed Tsvangirai has been elected that's fine and if there is a run-off that's fine. That is a matter we must await," Mr Mbeki said.

The former UN Secretary General, Kofi Annan, meanwhile called on the election commission to declare its results "faithfully and accurately".

"We live in an open world today and indeed the eyes of the world are on Zimbabwe, on its electoral commission, on its president," he said. "I urge them to do the right thing... The election results should be released now."

Mr Mugabe, 84, came to power 28 years ago at independence on a wave of optimism.

But in recent years Zimbabwe has been plagued by the world's highest inflation, as well as acute food and fuel shortages.