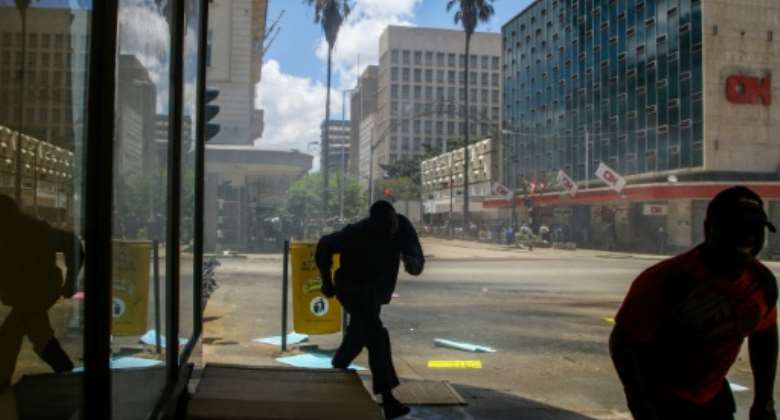 People run away from Zimbabwe police officers using a water canon during a demonstration by opposition parties against the introduction of bond notes as a currency in Harare, on November 30, 2016. By Jekesai Njikizana (AFP/File)

Zimbabwe's central bank on Monday rolled out the "bond notes" -- equivalent to the US dollar -- to ease critical cash shortages, despite fears of a return to the hyperinflation that wiped out many people's savings in 2009.

About 100 activists from the opposition Movement for Democratic Change (MDC) and the pressure group Tajamuka were chanting anti-government songs when police moved in to disperse them.

"Bond notes = Toilet tissue" read one placard, as others declared "No To Bond Notes" and called Mugabe "a limping donkey".

Police confronted the marchers with tear gas and water cannon, and beat up several of them with rubber truncheons.

Some shops in the capital's central business district pulled down their shutters as police chased after the demonstrators.

"We are not going to embrace bond notes," Hardlife Mudzingwa, a spokesman for Tajamuka, told AFP.

"They are being used to mop up the US dollars that people have in their accounts so that top government officials can import their personal goods."

Many cash machines now disperse half US dollars and half bond notes.

Zimbabwe abandoned its own dollar currency in 2009 after hyperinflation hit 500 billion percent.

The adoption of foreign currencies like the US dollar and the South African rand brought relative economic stability.

But the gains were soon lost as the government pursued aggressive policies that scared off investors, including indigenisation laws forcing foreign-owned companies to sell majority stakes to locals.

The southern African country's economic decline has worsened in recent months with banks running out of US dollar notes, forcing desperate depositors to sleep overnight outside bank entrances to try to withdraw money.

Many of the remaining businesses in Zimbabwe have ground to a halt, with unemployment at over 90 percent and the government repeatedly failing to pay soldiers and civil servants on time.

The proposal to introduce "bond notes" was a driving force behind series of anti-government street protests this year, but Mugabe's ruthless police force have crushed the wave of dissent.

The new currency, which closely resembles the former Zimbabwe dollar, comes in $2 notes and $1 coins, while a $5 bond note is expected shortly.

The public reception has been mixed, with many Zimbabwe suspicious that the bond note will not hold its value to the US dollar, and others reluctantly accepting that the new notes give them some access to cash.

Some shops and fuel stations have been refusing payment in bond notes despite official orders.

The government said the new notes will be backed by a $200 million support facility provided by the Cairo-based Afreximbank (Africa Export-Import Bank).