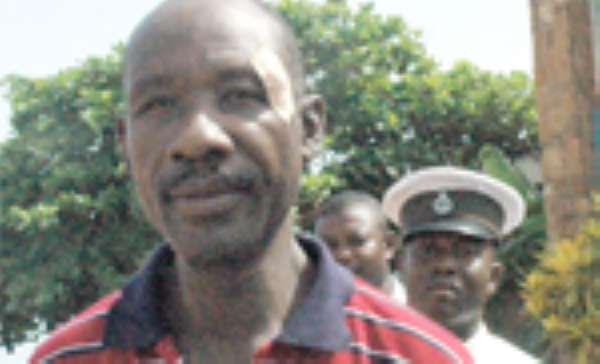 THE 51-YEAR-old businessman, Mr. Thomas Kofi Osei, who allegedly ignored the official siren and rammed his Mercedes Benz car into the convoy carrying President John Agyekum Kufuor to the Osu Castle, has been remanded in police custody by an Accra Motor Court.

The accused person, who looked like a drunk and mentally deranged person, was charged with four counts of dangerous driving, negligently causing harm, driving under the influence of alcohol and failing to give way to the presidential convoy.

Mr. Thomas Osei's plea was not taken and he was remanded to re-appear on November 30, 2007 after prosecution had pleaded with the court to do so for them to complete investigations.

The prosecutor, Chief Inspector Dora Serwaa, briefing the court about the incident, said on November 14, 2007 at about 11: 30 am, the accused person was driving a Mercedes Benz SE 500 saloon car with registration number GT 2989 W along the South Liberation Link from the direction of AFGO toward 37 Military Hospital in the inner lane.

According to her, on arriving at a spot some few metres to the Opeibia traffic light, the accused ignored the siren of the presidential convoy and drove straight into the rear side portion of the President's Mercedes Benz S500 saloon car, being driven by Mr. Osafo Addo.

She said the impact forced the President's vehicle to turn round and hit an electric pole, fall on its right side and land on a VW Golf saloon car with registration number 8750 X belonging to a certain Pastor Ken Joe Osei Kuffour.

All the vehicles, she said, were damaged while the drivers sustained various degrees of injuries and were rushed to the 37 Military Hospital where they were treated and discharged.

The accused person also got injured and was admitted and treated. However, President Kufuor miraculously escaped unhurt.

The prosecutor further stated that investigations revealed that the accused was under the influence of alcohol at the time of the accident, and when tested with an Alco Sensor III, his alcohol level read 0.41% instead of the legal limit of 0.08%.