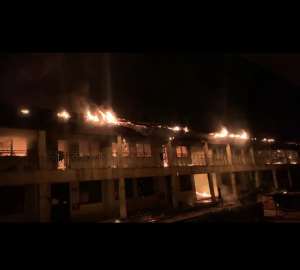 The Ghana Education Service (GES) says victims of Sunday's fire outbreak at the Wa Senior High Technical School (SHTS) are receiving counselling as a form of psychological support to overcome the shock.

It said the GES had directed the Guidance and Counseling Units of the Upper West Region and Wa Municipal Education directorates to support the affected students.

Mr Justine Kpan, the Upper West Regional Public Relations Officer, GES, said this in an interview with the Ghana News Agency in Wa on Monday when the Regional Director of Education led a team to the school to ascertain the level of damage.

The Wa Municipal Director of Education and other staff of the Municipal and Regional Education directorates accompanied the Mr Kpan.

A one-story building of the Girls Dormitory was guttered by fire at about 2030 hours on Sunday, causing damage to the students' belongings.

“It is the girls' dormitory, and most of them got traumatised. They collapsed and were rushed to the hospital,” he said.

“As of last night (Sunday night), we had about eight students there, most of whom had been discharged. I think currently only three of them are still there.”

He said no casualty was recorded and the GES was taking steps to get the affected girls resettled in other buildings.

“The level of blazing that we saw last night has weakened most parts of the structure and so it is very dangerous for you to have any habitation in there.”

Mr Kpan said the Fire Service had warned that on no account should anybody go into the affected structure.

The cause of fire is yet to be ascertained.