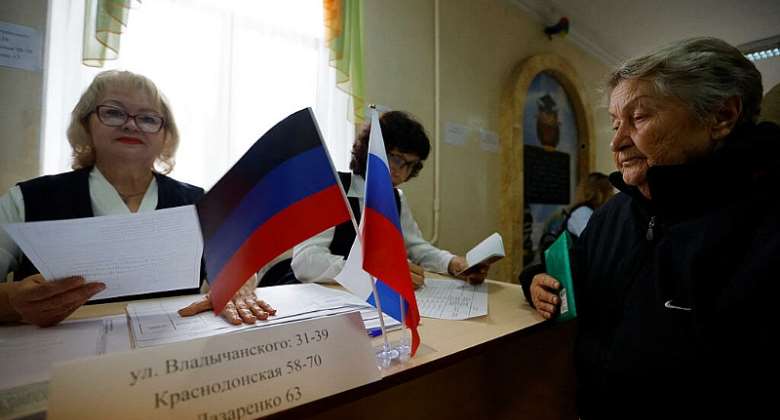 French foreign minister Catherine Colonna was in Kyiv Tuesday on an unannounced visit to Ukraine in a show of support for the country invaded by Russia. This comes as the EU said it would sanction those involved in organising "illegal" Russian referendums to annex four eastern regions of Ukraine.

"Good morning Ukraine, it's good to be back," she wrote on Twitter, posting a picture of herself walking in Kyiv with the French ambassador to Ukraine Etienne de Poncins.

During her visit, Colonna is meeting with her Ukrainian counterpart Dmytro Kuleba and with Ukraine's top prosecutor Andriy Kostin.

She is also scheduled to hold talks with Ukraine's President Volodymyr Zelensky and to visit to a military airport in the city of Gostomel, north of Kyiv.

The referendums are taking place place in the Donetsk and Luhansk "People's Republics", which declared independence in 2014, and were recognised as such by Russian President Vladimir Putin in February this year - and the Kherson and Zaporozhye regions that were occupied by Russian forces after the invasion.

The Organisation for Security and Co-operation in Europe (OSCE,) which monitors elections in member-states, has branded  the referendums as "illegal" because referendums "can only be announced and conducted by legitimate authorities in compliance with national legislation and international standards."

'Travesty'
French President Emmanuel Macron, for his part, described the referendums as a "travesty" and "provocation", speaking on the sidelines of the UN General Assembly last week.

The G7 countries have said they will "never recognize" the results, while Washington has promised a "swift and severe" response through additional economic sanctions.

The UK government has already sanctioned 92 Russian individuals and entities for their various roles in the voting.

"Sham referendums held at the barrel of a gun cannot be free or fair and we will never recognise their results," Foreign Secretary James Cleverly said in a statement.

New sanctions?
Meanwhile, the EU is set to sanction organisers of the votes.

"There would be consequences for all people who participate in the illegal, illegitimate referendums," Peter Stano, a spokesman for EU foreign policy chief Josep Borrell, told journalists.

The Kremlin warned Tuesday that votes held in Russian-controlled regions of Ukraine to join Russia would have security implications, with officials in Moscow recently threatening the use of nuclear weapons.

"The legal situation will radically change from the point of view of international law and that will also have consequences for security in these territories," the Kremlin's spokesman Dmitry Peskov told reporters.

'Netherlands to annex Russia'
The referendums even became topic of merciless parody by Dutch comedian Arjen Lubach, and an online video of his show targeting the referenda went viral.

Lubach said that Russian President Vladimir Putin "was organizing a referendum in a country where he has no territorial claim," and if Putin can do that, "then the Netherlands can do the same in Russia."

The video, partly in Russian, states that The Netherland's King William IV "is also your king,” adding that "when you belong to the Netherlands, your sons don't have to die in a meaningless war against Ukraine.”

'International observers'
Meanwhile, the pro-Russian Dan-News agency reported that, in total, more than 400 polling stations were opened for the referendum in the Donetsk "People's Republic" alone.

The agency reported that in the first four days of the voting period, turnout had reached 86,89 percent.

The voting was witnessed by "international observers," according to the Russian Tass News Agency, which mentioned retired journalist "Patrick Baab, a German observer," "Janlisbert Velasco of Venezuela" and several others.

But, according to the European Platform for Democratic Elections EPDE, a cooperation with Transparency International, none of the observers fulful the criteria needed for "credible election observation.

Influx of Russians in Georgia
Elsewhere, the number of Russians arriving daily in neighbouring Georgia has nearly doubled since President Vladimir Putin announced a partial mobilisation for the war in Ukraine, officials in Tbilisi said Tuesday.

The Caucasus country has been a major destination for Russians fleeing since the war began on 24 February.

The Kremlin said it wanted to recruit around 300,000 men.

"Four to five days ago 5,000-6,000 (Russians) were arriving in Georgia daily. The number has grown to some 10,000 per day," Georgia's interior minister Vakhtang Gomelauri told journalists.

On Tuesday, the local interior ministry in a Russian region that borders Georgia said there was a back-up of around 5,500 cars waiting to reach the Georgian border.