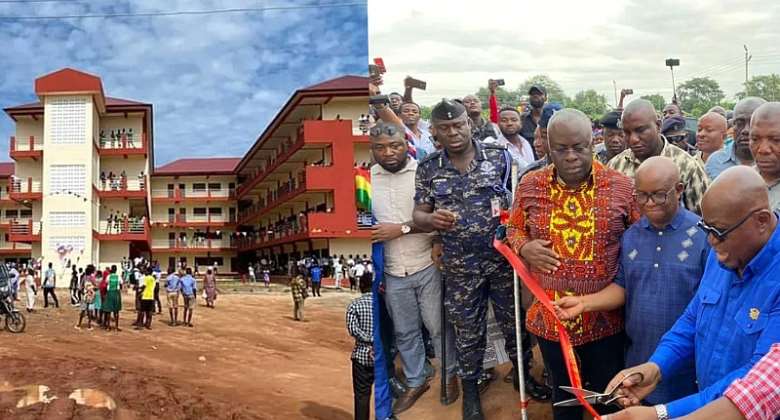 The National Democratic Congress (NDC) constituency branch in Ketu South of the Volta region in a statement released on Thursday, September 14, 2022 has taken a swipe at President Akufo-Addo for commissioning a project without giving credit to the previous Mahama administration.

The party expressed dismay that during President Akufo-Addo's recent visit to Volta Region, he commissioned a Community Day Senior High Technical School at Aflao which they said was started under former President John Dramani Mahama’s administration.

According to the statement signed by Mr Bright Dzila, the Ketu South NDC communication officer, the Aflao Community Day Senior High School was lobbied by Hon Fifi Kwetey the then Member of Parliament for Ketu South. They added that construction started in 2015.

"As usual and typical of President Akufo-Addo who is good at taking credit for President Mahama's projects, the government deliberately delayed the completion of the project after taking power in 2017.

"Even though we congratulate the president for coming to finally Commission and operationalized the school after insulting our Paramount Chief who merely appealed to the Government through the Parliamentary Committee on Education and the current Member of Parliament, Hon Abla Dzifa Gomashie," the statement noted.

The party however listed areas President Akufo-Addo failed in his presentation during the commissioning of the community Day school at Aflao on Wednesday September 13.

1. Acknowledge the immense contributions of his predecessor, President Mahama and the NDC government for starting the construction of the school.

2. Publicly apologizing unreservedly to the chiefs and people of Aflao for his unguarded attacks on the Paramount Chief Togbuigah Adzonugaga Amenya Fiti IV for calling on him to operationalize the same school for the benefit of our children.

3. Speak to the deplorable nature of our roads, most especially the Komla Dumor road which he plied to the Chief's palace and subsequently to the school yesterday and at least touch on other important roads such as the Diamond cement road, Agbozume and Klikor township roads, the unmotorable Tokor to Ho road, and the Denu to Keta road.

4. Use the opportunity to at least visit and sympathize with the victims of the tidal wave devastation in Adina, Amutsinu, Salakope and Agavedzi.

Mr Dzila stressed, "But we are not surprised that President Akufo-Addo failed to do all of the above because even his own party members who are his executives on the ground here in Ketu South were completely ignored yesterday just as he ignored and failed to address the invited Chiefs and the gathering."

According to him, students who were bused from other schools to grace the occasion were starved of food and water.

He added that the NPP decorate the school with their colours, violating the very laws they are expected to respect and uphold.

Mr. Dzila indicated that the NDC vehemently condemn the public humiliation suffered again by their Chiefs and the students due to the conduct of President Akufo-Addo and his entourage.