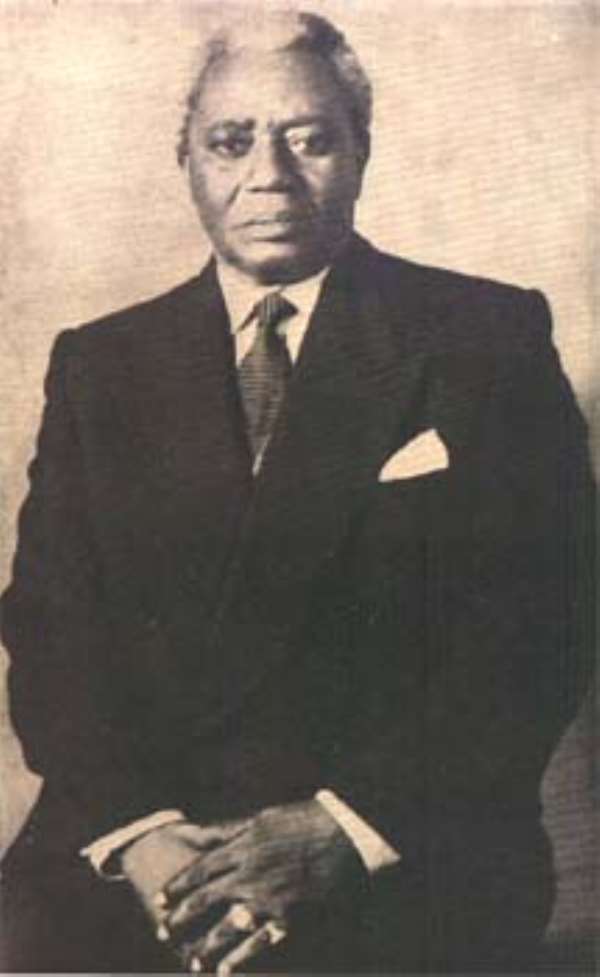 In the immutably democratic spirit of the Doyen of Gold Coast and Ghanaian politics, Adu-Boahen concludes his J. B. Danquah Memorial Lectures (1988) by unreservedly castigating the hitherto chronic and pathological, political sub-culture of stratocracy – or military dictatorship – as the especial bane of post-colonial Ghanaian political history. Quoting the venerable Ghanaian professional soldier Lt.-Gen. Ocran, the lecturer notes: “I believe that soldiers should leave politics alone. When they try to run a country, in spite of their [boyish] enthusiasm, they run it badly because they are, right from the beginning, expected to assume the role of policy-makers in a job for which they have had no previous training…. They should never purport to govern, they [simply] cannot, because they generally lack the political education, the mentality and, above all, the flexibility of mind and approach to governmental problems….”(Ghanaian Sphinx 33-34); ellipses appear in the original).

Noting the grim and politically unsound fact that in 1979 alone the helm of the country passed through three leadership hands, still, Boahen is quick and apt to poignantly observe that the carcinogenic climate of military dictatorship that blighted the Ghanaian political landscape between 1966 and 2000, did not occur without the grossly unethical and unprincipled collaboration of Ghanaian civilians from all walks of life: “Whatever the nature of a government, corrupt or incorrupt, efficient or inefficient, it will always have ready collaborators among all classes of the Ghanaian society. And …[what is even more morally daunting] such collaborators are usually among the most corrupt, shady, opportunistic, unprincipled and sycophantic people of the country”(Ghanaian Sphinx 34-35).

And while in the instance of the December 1981 Rawlings-led military putsch that ousted the legitimately elected government of President Hilla Limann's People's National Party (PNP), the veteran political critic acknowledges was precipitated by a climate of rank administrative incompetence and abject venality in both aisles of Parliament, still, Boahen firmly believes that the advent of the sanguinary junta that assumed the reins of governance, the so-called Provisional National Defense Council (PNDC), was highly uncalled for. The historian emeritus of the flagship University of Ghana corroborates the preceding assertion by noting that the PNDC, upon accession to power, proceeded to implement the same economically throttling policies that appear to have constituted the preemptive pretext of the PNDC: “The fundamental reason for the disastrous economic record of Limann's government was [the PNP leader's flat] refusal to accept the [Shylockian] terms of [the] IMF [in exchange for the latter institution's] assistance, [terms] which included [a precipitous] devaluation [of the Ghanaian monetary currency, the Cedi]. But there is no doubt whatsoever that whether he liked it or not, Limann would have been compelled by the sheer pressure and reality of the economic situation to go to the IMF sooner rather than later and swallow the bitter pill of devaluation in exactly the same way that Flt.-Lt. Rawlings and his PNDC themselves had to do after two years of dilly-dallying. / As a move to solve [solving?] the economic problems facing the country, therefore, the 31st December coup was most unnecessary. Indeed, on the very day that the PNDC launched its Economic Recovery Programme with the support, approval and blessing of the IMF and the World Bank, Flt.-Lt. Rawlings should have admitted his failure, recalled Limann or ordered fresh elections and penitently and graciously withdrawn from the scene”(Boahen 43-44).

In essence, what happened was that Ghanaians appear to have, for whatever capricious reasons, patently and unscrupulously lowered the criteria for sound administrative performance for the PNDC government. This may have largely derived from the lingering nostalgia which a sizable percentage of the country's populace had for the admittedly and auspiciously brief intervention of the Armed Forces Revolutionary Council (AFRC) which had also been led by Flt.-Lt. Rawlings. But even more curious was the fact that the extortionate IMF economic measures imposed on Ghanaians via the PNDC was shortly thereafter being loudly touted by Western governments as the golden standard for an emergent post-colonial African political landscape and culture. Paradoxically, as Boahen poignantly elucidates, the PNDC's facile implementation of the so-called Economic Recovery Program (ERP), an IMF blueprint that came to characterize many an African government in the 1980s, was brazenly predicated on the knavish gimmick of abject hypocrisy, deafening Western applause and patronage notwithstanding: “For non-Ghanaian readers[,] the missing link in this argument needs to be supplied. The PNDC had advanced as one of the main reasons for the coup the accusation that the Limann government had 'sold out' to the IMF and other sinister forces and was about to introduce devaluation and other measures that would worsen the plight of the masses. Before 31st December 1981[,] this accusation had surfaced as a major issue of contention between the government and some members of the Youth Wing of the PNP who subsequently were among the first organized groups to embrace the coup. The PNDC was thus actively hostile to the idea of an IMF program in 1982-83, and the introduction of the ERP in 1983 represented not only a sharp ideological and political about face, but the repudiation of one of the principal excuses for the coup itself”(Ghanaian Sphinx 44).

Interestingly enough, whatever may be aptly deemed to precipitously vitiate the ostensible pretext for the violent intervention of the PNDC in December 1981 is paradoxically accorded remarkable, or credence, by Professor Adu-Boahen. And needless to say, the preceding is not in the least meliorated by the fact that some prominent and leading members of the parliamentary opposition, including substantive president (2005) John Agyekum-Kufuor, scurried into the confidence of Chairman Rawlings and his PNDC posse and clinched for themselves plum positions in the latter's cabinet. And, indeed, it is this apparent dearth of democratic principles and rank corruption which might be aptly seen to inadvertently contradict the central theme, or thesis, of Boahen's treatise, The Ghanaian Sphinx. And going by his rather bold and expansive thesis that “whatever the nature of a government, corrupt or incorrupt, efficient or inefficient, it will always have ready collaborators among all classes of Ghanaian society. And that such collaborators are usually among the most corrupt, shady, opportunistic, unprincipled and sycophantic people of the country”(34-35), would, indeed, Professor Adu-Boahen be willing to lend, or accord, the same set of principles to a critical examination of the character and personality of President John Agyekum-Kufuor, for instance?

What is more, the central thesis of the author of The Ghanaian Sphinx is not enhanced, particularly, when Professor Adu-Boahen also critically observes that: “[T]hroughout 1980 the [PNP] government harassed soldiers – officers, other ranks – who were in any way associated with the AFRC. [And that] many of them were arrested and detained for months without trial while some were dismissed. [And that] Limann also took certain actions which gave the impression to both the military and the people that he was reversing the gains of June 4”(Boahen 40).

The author also seriously vitiates his own argument against PNDC military intervention when Boahen makes the following telling observation, among others: “Admitting that by December 1981 Limann and his government had proved beyond all reasonable doubt that they were simply incapable of solving the socioeconomic problems and were rather compounding them and that something had to be done, there were many options open to the people of Ghana and in fact many of them were being canvassed. These options included forcing Limann to resign, impeaching him – and Article 56 of the [Third Republican Constitution] laid down procedures for this – or what so many people were advocating at the time, the formation of a coalition government”(Ghanaian Sphinx 43).

Indeed, in the preceding, Boahen gives the indubitably damning impression of a neurotically addled Ghanaian electorate. For starters, if, indeed, Article 56 of the 1979 Constitution laid down procedures for legitimately unseating a substantive president, why then were “many people…advocating…the formation of a coalition government”? Did not such an initiative, in of itself, flagrantly violate Article 56, which did not call for the formation of a coalition government in case of presidential incapacity or incompetence? Or was this just some weird sort of an attempt at resurrecting the ill-fated Union Government (Unigov) regime or mechanism, where the Third Republican Constitution itself did not appear to endorse the institutionalization of a coalition government? Boahen himself clearly offers us the alternative; and it is one which, paradoxically, the veteran politician and academic flatly rejects – military intervention. For in expatiating on the legion indicators of the purported administrative incompetence of the Limann administration, Boahen also readily observes the virtual absence of a civic or civilian leadership alternative to President Hilla Limann: “Nor did the opposition members in Parliament help the situation either. They as well as those of [the] PNP voted for themselves a salary scale which was totally out of proportion to the prevailing ones in the country. They compounded this blunder by taking loans to purchase private cars for themselves while the public transport system had broken down”(Ghanaian Sphinx 39-40).

Needless to say, in the year 2005 and under the aegis of the so-called 1992 Fourth Republican Constitution, Ghanaian politicians, both under the pseudo-civilian tenure of Chairman Rawlings (1992-2000) and President Kufuor, continue to stolidly alienate themselves from the masses of the people in much the same way as yesteryear. Interestingly also, the abject lack of public accountability during the stratocratic tenure of Chairman Rawlings, from 1982 to 1992 – actually, the PNDC government wrote a self-serving indemnity clause into Ghana's Fourth Republican Constitution (1992), thereby ensuring that Chairman Rawlings and his posse of kleptocrats shall never be brought to justice – almost convinces the well-meaning student of post-colonial Ghanaian politics, in Shakespearean parlance, that the problem may very well inhere in the virtual demise of a critically conscious and responsible proverbial Ghanaian personality. In essence, the abject death (or is it brutal assassination?) of the God in us, that sacred and altruistic human quality which the Doyen of Gold Coast and Ghanaian politics talks about in his philosophical classic The Akan Doctrine of God (1944), and part of which is briefly discussed in the introduction to this volume or series. *Kwame Okoampa-Ahoofe, Jr., Ph.D., teaches English and Journalism at Nassau Community College of the State University of New York, Garden City. He is the author of eleven volumes of poetry and prose, including Nananom: Foremothers, a volume of poetry. All of his books are available at iUniverse.com, Amazon.com, Powells.com, Borders.com, and Barnes & Noble.com. Views expressed by the author(s) do not necessarily reflect those of GhanaHomePage. #####################