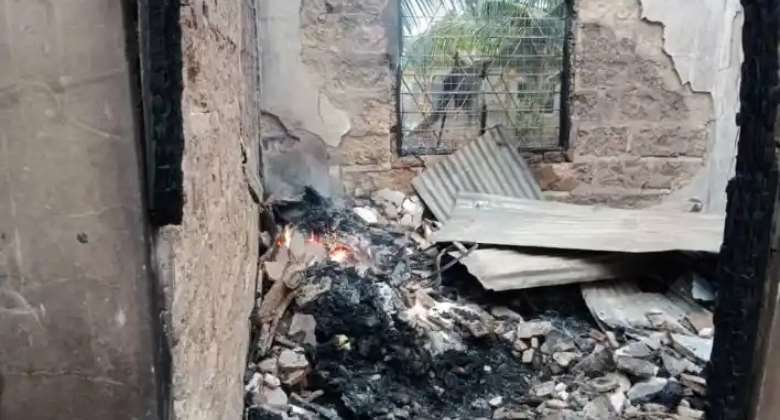 A fire outbreak at Ohwim in the Ashanti Region on Monday, August 15, did not only destroy property but also resulted in the death of three people including an unborn baby.

The fire per the information gathered started around 11:30 and trapped a family in their two-bedroom apartment.

Sadly, a pregnant woman identified as Philomena Osei who was in the house has been burnt to death together with her two sons aged 7 and 9.

However, one other sibling who at the time of the fire incident was sleeping in a separate room managed to escape the fire.

Narrating the incident, one of the neighbours who witness the burning of the house said “I heard the woman shouting for help. By the time I stepped out, I realised the entire building has been engulfed by fire. Together with other residents, we called the [Ghana National] Fire Service but before they arrived, the three have been burnt to death.”

Although investigations are now being conducted, some residents suspect arson.

This is because, in the past, someone had set the net of one of the windows of the apartment on fire.

It was however detected on time and doused.

Meanwhile, the Ghana National Fire Service has given the assurance that if there is something of that sort, it would be found at the end of its investigation.

Crowd jeers, boos Akufo-Addo on stage; chants 'away!' amidst...
21 minutes ago