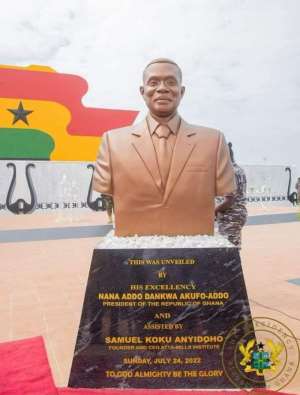 Mr Haruna Iddrisu, the Minority Leader, addressing the Parliamentary Press Corps in Accra, said the Minority was disappointed that the bust, which was commissioned the President on Sunday, July 24, to commemorate the 10th anniversary of the passing of the late President did not bear his name.

“Yesterday marked 10 years of the passing of one of our most respected leaders and third President of the Fourth Republic, Professor JEA Mills. May his soul rest in perfect peace. A number of events took place in his memory, 10 years on,” Mr Iddrisu said.

He said whilst the Minority urges Ghanaians, even persons in public life to learn from the Mills' example and even for nothing his punctuality and additionally, his austerity in terms of protecting the public purse, stating that “he didn't run a long convoy of 30, 20, 57 wasteful vehicles and wasteful fuel in the name of the Republic”.

He appealed to the President and his associate such as Mr Koku Anyidoho to do what was right and appropriate.

He also reminded them that the Office of the late President was institutional, which goes beyond the persona of John Evans Atta Mills.

“So, long as our democracy endures, we will produce former Presidents of our Republic. But we want his name to be honoured because he deserves honour, we know that God has honoured him already,” Mr Mahama said.

He cited the statue of President Kwame Nkrumah at the Kwame Nkrumah Mausoleum bears his name, years of birth and death (1909-1972), and that the bust of late President Mills should also bear his name.

“If you go to that of John Evans Atta Mills, our respected (late) President, beneath the bust is not his name, it is that unveiled by Nana Addo Dankwa Akufo-Addo, that is not Professor Mills' name, and we found that incredibly unaccepted and offensive,” Mr Iddrisu said.

“And then we see references to the President of the Republic unveiling and assisted by Koku Anyidoho.”

He said the bust, which was for the eternal memory of the late President must have his name, so that visitors to the Asomdwe Park would know that it was John Evans Atta Mills, the third President of the fourth republic, who passed on in public service serving Ghana.

Mr Iddrisu said late President Mills was a man of peace, who preached peace and that he (Mr Iddrisu) learnt peace from him.

“Persons who visits the Asomdwe Park must know that it is the final resting place of the late John Evans Atta Mills, President of the country who passed on in office and to his eternal memory this bust is put in place,” he said.

“How then can any of you explain that just beneath the bust you see who unveiled it and who sponsored or who supported it, that is not his name?”

He said for the unsuspecting people somebody might go to the Asomdwe Park and then the picture (bust) would be to referred as unveiled by; declaring that “in any case, I never even saw Prof Mills in that kind of brown attire”

He said late President Mills exemplifies humility and, modesty, for which Ghanaians should do well to honour him in death.

“Then, those of you who go to church and sing Methodist hymn, 'rest in peace', is he resting in peace? We want him to rest in peace. He deserves peace.”