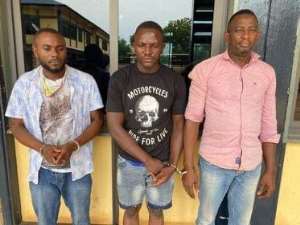 Alhaji Shani Mohammed, a New Patriotic Party (NPP) Chairmanship aspirant in the North East Region who was arrested in connection with illegal possession of firearms has been granted a GHS50,000 bail by the Tamale District Magistrate Court.

He has since been charged with conspiracy to commit crime and possession of firearms and ammunition without authority.

Alhaji Shani Mohammed is expected to reappear in court on May 20, 2022.

Alhaji Shani Mohammed, a New Patriotic Party (NPP) Chairmanship aspirant in the North East region was arrested by the Northern Regional Police Command in connection with illegal possession of firearms.

The North East NPP aspirant's arrest follows the arrest of some three persons with weapons at Kukuabila near Nasia in the West Mamprusi municipality of the North East region.

The suspects Amadu Alhassan, a native of Tamale, Atito Godstime, and Seidu Ado Bala, both Nigerians were arrested with a loaded AK 47 riffle, a foreign-made pistol and ammunition concealed in the vehicle that they were travelling with.

The Northern Regional Crime Officer, Supt. Bernard Baba Ananga, who confirmed the arrest of the suspects to DGN Online said one of the suspects mentioned the NPP chairmanship aspirant as the one they were transporting the weapons to in the North East region.

According to him, the NPP chairmanship aspirant is in the custody of the police and his statement has been taken and will be arraigned before court after investigations.

He indicated that the NPP aspirant admitted that he knew one of the suspects arrested with the AK 47 riffle.

Supt. Ananga disclosed that when the police interrogated the three suspects, they revealed that the NPP chairmanship aspirant asked them to bring the weapons to the North East Region.

“The suspects are saying that is it Ahaji Shani who told them to bring the firearms to him so he has to answer further questions.”

The Northern Regional Crime Officer, however denied claims that the case is linked to an assassination plot in the North East region.