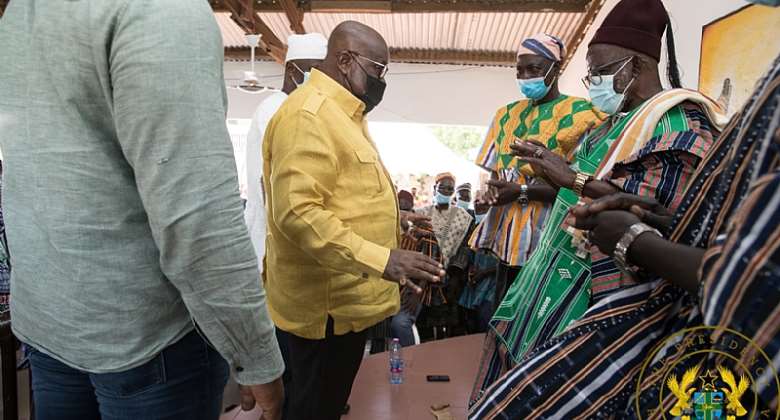 It ought to have become clear to all Ghanaian citizens, both at home and abroad, by now, that it is only President Addo Dankwa Akufo-Addo, fittingly conferred with the award and accolade of “Africa’s Man of the Year,” by Forbes Magazine, who can definitively resolve the morally regressive and economically draining protracted bloodletting conflict that has decidedly become synonymous with Bawku township in the Upper-East Region of Ghana. Which was why it came to me as very refreshing and morally auspicious, when Nana Akufo-Addo recently told a visiting delegation of some chiefs and elders of Bawku and its neighboring communities to begin smoking the peace pipe, as a means of ensuring the rapid and massive development of the violence-prone and wracked community of some 70,000 (See “Bawku Conflict: Cooperate with Government to Ensure Peace – Akufo-Addo” Classfmonline.com 1/27/22).

“The President of the Republic,” as many a Ghanaian media establishment and publication is wont to affectionately and respectfully call Nana Akufo-Addo, was also reported to have solemnly observed that it was imperative for the leaders and elders of the predominantly Frafra-ethnic community, most especially the Bawku Naaba, or the Paramount Chief of Bawku, to wisely and constructively cooperate and collaborate with the present government of the New Patriotic Party (NPP) to ensure that peace and prosperity reigned in that locality of the Upper-East Region. His call is opportune and morally refreshing because Nana Akufo-Addo, so far, is the only one among Ghana’s five Fourth-Republican Presidents who has proven beyond any iota or shadow of doubt that he can successfully broker peace and bring stability and a healthy and meaningful material development to any perennially troubled spot or sub-polity within the sovereign territorial boundaries of the country.

The megalomaniacal and epically failed Career Presidential Candidate of the country’s main opposition National Democratic Congress (NDC), Mr. John “European Airbus Payola” Dramani Mahama, can only talk with empty bluster while being studiously focused on how best to use the hallowed name of the Ghanaian taxpayer and the privilege and influence of his office of public trust to selfishly and greedily solicit and receive bribes at the expense of Ghana’s healthy growth and development. Nana Akufo-Addo has the classic, enviable and indelible example of the definitive resolution of the Yendi Chieftaincy Crisis to establish his confidence and credibility with the Bawku Naaba and his people.

In receiving the delegation of the chiefs and elders of Bawku at Jubilee House, or The Presidency, the former Attorney-General and Minister of Justice is quoted to have made the following very pensive and trenchant remark: “I know very well the nature of the decision that the Supreme Court took over the Bawku Chieftaincy Conflict…. I am hoping that the Bawku Naaba will also cooperate with the Government to bring peace to the area.” Needless to say, the Bawku Conflict is a problem that negatively impacts virtually every part of the country and one that can only be ignored at the peril of the peace and stability of our entire country. Nonetheless, I also vehemently disagree with Mr. Ayariga, the National Democratic Congress’ Member of Parliament for Bawku-Central, that there is absolutely no viable or constructive solution to the age-old bloody Bawku internecine conflict; and that about the only effective methodology for dealing with this most morally opprobrious and lethal situation is merely for the Central Government in Accra to expend millions of cedis of hard-earned taxpayer money to “contain” and/or “control” the conflict (See “Mahama Ayariga Demands Action Against Persons Fueling Bawku Tensions on Social Media” Modernghana.com 1/26/22).

Now, what this kind of warped argument and logic presupposes is that the Bawku Conflict is decidedly a lost cause about which absolutely nothing can be done solution-wise. Which, of course, is rather pathetic but, nevertheless, perfectly understandable because the leadership of the National Democratic Congress has had several opportunities to resolve the Bawku Conflict in the past but did absolutely nothing or zilch, as New Yorkers are wont to say. It is also preposterous for the Harvard University Graduate School alumnus to squarely blame social media bloggers and activists from the conflict-torn area for either “instigating” or “escalating” the degree or the extent and level of the Bawku Conflict. The fact of the matter is that the Bawku Conflict has witnessed some of the most barbaric forms of bloodletting violence in the pre-social media era. Which, in effect, also means that the man who smugly pretends to represent approximately one-third of “Bawkuites,” or the people of Bawku, has either absolutely no leadership skills or the requisite talent for bringing a definitive halt to the Bawku Conflict.

It is also downright criminal for the Bawku-Central NDC-MP to cynically counsel that any yeomanly attempt to bring peace and stability to Bawku township, as a prerequisite to the opportunity for the rapid growth and socioeconomic development of the area is an absolute nonstarter. And that the Akufo-Addo-led government of the New Patriotic Party would be much better off by just containing the Bawku Conflict, while the people of Bawku literally tore out one another’s guts.

Serwaa Broni attack: Give us information to impeach Akufo-Ad...
43 minutes ago