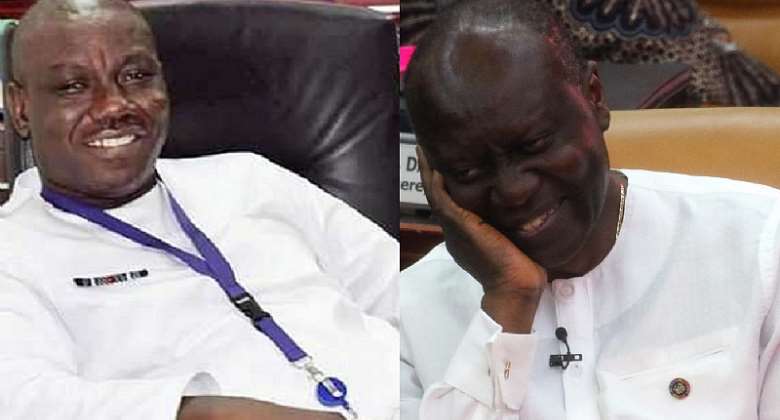 Member of Parliament (MP) for the Bolgatanga Central Constituency in the Upper East Region Isaac Adongo has taken his usual swipe at Finance Minister Ken Ofori-Atta’s over the country's latest economic outlook.

He said following the downgrading of Ghana's economy by International ratings agency, Fitch, Ghana in the hands of Finance Minister Ken Ofori-Atta can no more borrow to "eat kenkey and fish."

The downgrade, it said, reflects the sovereign's loss of access to international capital markets in the second-half of 2021, following a pandemic-related [COVID-19] surge in government debt.

In the report, Fitch noted that “this comes in the context of uncertainty about the government's ability to stabilise debt and against a backdrop of tightening global financing conditions. In our view, Ghana's ability to deliver on planned fiscal consolidation efforts could be hindered by the heavier reliance on domestic debt issuance with higher interest costs, in the context of an already exceptionally high interest expenditure to revenue ratio.”

Many analysts have said the recent rating is not surprising given the macroeconomic situation of the country.

Speaking on an Accra-based Accra FM, Isaac Adongo noted that the latest news from Fitch confirms his long held position on the abysmal economic performance of the Vice President and Finance Minister.

"The era of borrowing only to come and eat kenkey and fish like the Finance Minister has been doing since he assumed office in 2017 is over.

“I’m surprised the president is still keeping Mr Ken Ofori-Atta at post even in the wake of glaring evidence that the economy is not in good shape.

“With the penchant for spending as a private person and a public officer, in other jurisdictions, Mr Ken Ofori-Atta would not have come near the position of a deputy minister,” he argued.

He argues that Bloomberg is only confirming the issues he raised a year ago.

“Since the Vice-President jumped ship, he has turned himself into a ‘Yahoo boy’ whose only concern is how to fidget with the internet in the name of digitalisation.

“The Vice-President has shifted gears into digitalization, leaving economic management on the shoulders of the incompetent Finance Minister.

The legislator stated that the controversial E-levy will not be able to save Ghana’s economy, adding that if GHS20 billion could not help the situation, what can GHS9 billion do?

He believes that the situation can only be averted if the creature comfort President Akufo-Addo reduces his wasteful spending on unnecessary including the chartering of luxurious private jet for his foreign trips.