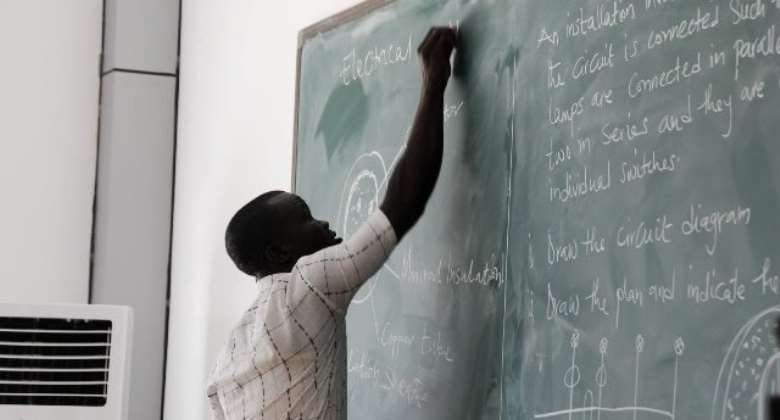 The Federation of Unionized teachers is a pressure group of teachers whose mission is to bring teachers from various Teacher Unions together under one umbrella to demand fairness, transparency, and accountability from the leadership of the Teacher Unions.

In a letter written on the 1st of December 2021 and copied to the three teacher unions (NAGRAT, GNAT, and CCT-GH), the Federation claimed that they sighted a press release which was supposedly coming from the Ministry of Education, written by its PRO; with reference number DC 306/355/01 and dated 23rd November 2021.

They indicated that, In that press statement, the Ministry sought to refute some allegations that the one-teacher- one laptop deal was an avenue for create, loot, and share.

They went further to state that the Ministry of Education indicated in paragraph 3 of their press release that it was the leadership of the Teacher Unions who chose KA Technologies for the supply and distribution of the laptop computers to teachers. The Federation implied in their letter that the Ministry stated that on the 17th of November, 2020 there was a request for approval to use a single-source procurement process to engage KA Technologies and that the approval was granted on the 20th of November, 2020.

They mentioned that the Ministry of Education said in their press release that the unit cost of the said laptop was Gh¢1,550.

The Federation of Unionized Teachers asked their leaders to furnish them with information on the reason(s) why the leadership of the Teacher Unions that Is, NAGRAT, GNAT, and CCT singlehandedly handpicked K A Technologies for the one- teacher -one laptop deal.

Also, they said they wanted to know why Sole Sourcing or Single -Source Procurement process was adopted for the contract instead of competitive tendering. They wanted the leadership of the Teacher Unions to tell them the pressing reasons that necessitated the use of Sole-Sourcing to engage KA Technologies for the laptop deal. And the track record of that company.

The Federation inquired also that they wanted to know why the unit price for each laptop keeps changing. According to the Federation, the Ministry of Education stated in their press release that the unit price of each laptop was Gh¢1,550. They indicated also that sometime back, the President of NAGRAT granted an interview on Adom FM and stated categorically that, the 30% of the laptop cost which teachers would pay was Gh¢549. If you do some calculations, you will realize that the unit price of the laptop changed from Gh¢1,550 to Gh¢1,830. (549 is 30% of 1,830). November ending, the Controller and Accountant General Department deducted Gh¢509.55 from teachers' Continuous Professional Development Allowance (CPDA). The amount deducted is supposed to be 30% of the total laptop price. If you do some math, you will see also that the unit price of the laptop has changed again from 1,830 to Gh¢1,698.50. (509.55 is 30% of 1,698.50)

I view the above conflicting figures, the Federation wanted their unions' heads to explain the reason behind the changes in the unit price of the machine, and also give them the actual unit price of each laptop as enshrined in the Memorandum of Understanding (MoU) that was reached between the unions' heads the other parties to the laptop deal.

May God bless our homeland Ghana and make her institutions greater and stronger.

Latest Photo Reports
Catch up with all the political quotes from our politicians.
Advertise here
More Article
ModernGhana Links
The Last Soldier: A Podium Motivational Speech
The Tragic End Of A 5-Year-Old Pupil In Kano
Nanosatellite launch is a big step forward for African space science
The cost of justice in Ghana
The Geopolitics of Water Series, Part Three: Water: a commodity or a human right?
2023 Power Shift: A Greek Gift? (Part 1)
Prepare for Robust Future Defence from Pandemics- Kulpati
Somaliland's quest for recognition: UK debate offers hint of a sea change
Digitalisation is key for resilience
TOP STORIES