The State Must Institute Reforms to Squash "Ex-gratia", Now 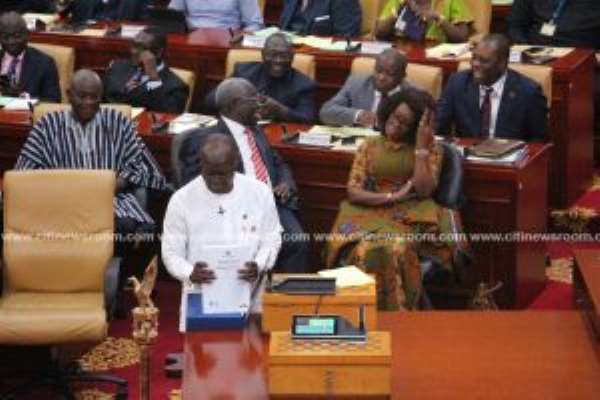 Sometime in early January this year, the media domain was crowded with issues relating to Ex-gratia which is continuously enjoyed after every four years by members of the Legislature, and the Executive arms of government. We are living in a country that is struggling with, COVID -19, a gargantuan wage bill, a chronic debt stock, bad roads, inadequate health posts, unemployment: to mention, but a few. And yet individuals who are clothed with the fiduciary responsibilities of pursuing the interest of the people, appear to be shirking it.

Before I delve into the matter proper, let me consider what Ex-gratia is. I would like to quote certain authorities that have provided various definitions for the term, "Ex-gratia". I think I can do real justice to the subject, after having looked at what authorities have said about it.

"When something has been done ex gratia, it has been done voluntarily, out of kind or grace. In law, an ex gratia payment is a payment made without the giver recognising any liability or legal obligation."

"An ex gratia payment is not necessary, especially legally, but is made to show good intentions."

: as a favor : not compelled by legal right."

"An ex gratia payment is made to an individual by an organization, government, or insurer for damages or claims, but it does not require the admittance of liability by the party making the payment.

"An ex gratia payment is considered voluntary because the party making the payment is not obligated to compensate the individual. In Latin, “ex gratia” means “by favor.”

The big question is, why then does Corporate Ghana find itself obligated to pay Ex-gratia to a certain class of its employees? The answer is not farfetched. Our "Ex-gratia" is something else. What we call Ex-gratia in our parlance are emoluments and gratuities that are enjoyed by article 71 officeholders.

Article 114 throws some light on that of the Legislature, whom according to article 71, clause (1)(a) are also eligible beneficiaries of the gratuities for article 71 officeholders.

Article 71 of the Constitution provides thus:

"(1) The salaries and allowances payable, and the facilities and privileges available, to-

(a) the Speaker and Deputy Speakers and members of Parliament;

(b) the Chief Justice and the other Justices of the Superior Court of Judicature;

(c) the Auditor-General, the Chairman and Deputy Chairmen of the Electoral Commission, the commissioner for Human Rights and Administrative Justice and his Deputies and the District Assemblies Common Fund Administrator;

(d) the Chairman, Vice-Chairman and the other members of-

(i) a National Council for Higher Education howsoever described;

(iv) the Lands Commission; and

being expenditure charged on the Consolidated Fund, shall be determined by the President on the recommendations of a committee of not more than five persons appointed by the President, acting in accordance with the advice of the Council of State.

(2) The salaries and allowances payable, and the facilities available, to the President, the Vice-President, the chairman and the other members of the Council of State; Ministers of State and Deputy Ministers, being expenditure charged on the Consolidated Fund, shall be determined by Parliament on the recommendations of the committee referred to in clause (1) of this article.

(3) For the purposes of this article, and except as otherwise provided in this Constitution, "salaries" includes allowances, facilities and privileges and retiring benefits or awards."

The permanent ones are those who have security of tenure in office, whilst the temporary ones, on the other hand, have their tenure of office expiring after every four years--the politicians.

Article114 of the Constitution provides:

"(1) A person who has served as a member of Parliament for a period of not less than four years shall be eligible, on ceasing to be a member or on his death, for the payment of such gratuity to him or his personal representatives, as the case may be, as shall be determined by the President, acting in consultation with the Committee referred to in article 71 of this Constitution.

(2) For the purpose of clause (1) of this article, the period of four years specified in that clause shall be interpreted to mean four continuous years, and accordingly, any period when the member is out of office as a member, otherwise than by dissolution of Parliament, shall not be taken into account."

How can one person be retiring from the same work several times over? And receiving "pension" (Ex-gratia) for each unit of "retirement". It does not make sense. Even those who have lost their seats can win in future and become eligible for the Ex-gratia again. Can we not fix that situation?

Not long ago, there were media reports in respect of amounts demanded by MPs as Ex-gratia for legislators of the 7th Parliament. Figures quoted were betwixt GH¢450,000 and GH¢600,000. As for the Executive, I cannot tell. This nation is groaning under the weight of a huge wage bill. And her managers seem not to be bothered about the situation.

In spite of the tremendous Ex-gratia they are waiting to receive, we are told also that presently, the MPs are requesting for a salary increase from about GH¢14,000 to GH¢21,000. And this is happening at a time when the country's economy is suffering from the negative impact of Covid. One would have thought that beneficiaries of this current Ex-gratia would have asked for a moderate increase in salary; or better still, in emoluments: half of the amount that was received at the end of the 6th Parliament as Ex-gratia.

I would like to recommend that, Corporate Ghana should, without delay, put some legal reforms in place to amend article 114 to cease members of the legislature from taking consecutive gratuities to the detriment of the the ordinary taxpayers. Members of the Executive should not be exempted from having a feel of the amendments.

The most interesting part of article 114 is the beginning of clause (1); which says, " A person who has served as a member of Parliament for a period of not less than four years shall be eligible, on CEASING TO BE A MEMBER or on his death..." I am not a lawyer, but this constitutional provision is very clear. "...On CEASING TO BE A MEMBER..." means No longer a member of Parliament. Therefore, it is not proper that, individuals who are still members of Parliament should receive that special emoluments whilst in office.

In view of the above, I suggest that, the Ex-gratia, which is a retirement package should only be given to politicians who have signed an undertaking not to vie for any political office forthwith: (Thus CEASED TO BE)-- after having lost their bid to continue to "serve" the people. Those who want to perpetuate themselves in Parliament should forfeit the Ex-gratia in the interim. They may take it as and when they are ready to hang their legislative boots. Ghana cannot afford to continue to pay such consecutive gratuities to politicians after every four years.