Political Demonstrations, Then and Now 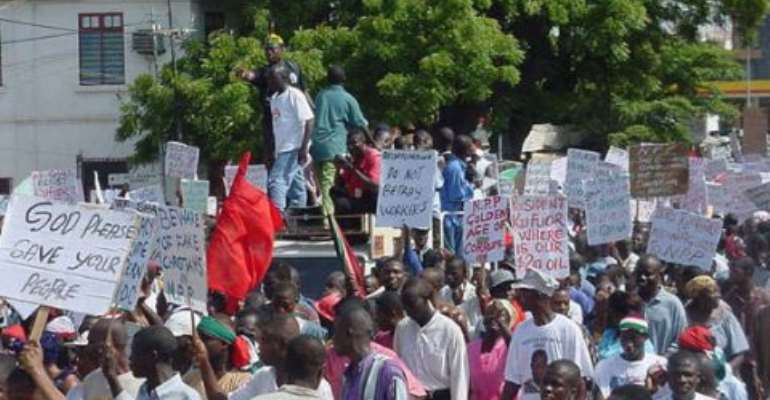 Members of the National Democratic Congress (NDC) exercised their constitutional right by assembling and demonstrating in Accra on May 6, in order to make a political statement under the theme ‘March For Survival’(for Ghanaian workers). It does not matter that the NDC chose the wrong theme for their demonstration. Indeed, Ghanians are surviving rather well (thank you!), the mountain of debt, economic mismanagement, and near bankrupt treasury; that the NDC bequeathed to the New Patriotic Party (NPP) government, notwithstanding. Wasn’t it former deputy finance minister Selormey (now serving prison time for corruption), who famously said that it was not the responsibility of the outgoing NDC government to leave any money for the in-coming government? Put simply therefore, the afore-mentioned theme of ‘March for Survival’, should rather have been a march-for-the-survival of the NDC as a credible political party in Ghana. In an effort to create a wholly undeserved gargantuan image of their ‘founder’ Jerry Rawlings, NDC scribes described the group not as a political party but a “political movement”. This definition was intended to accord Jerry Rawlings a messianic image and a feeling of having transformed Ghana en mass. A mere designation of a ‘party’ would confine Rawlings’ image! Nothing could be further from the truth, however. Yet, the effect of this bloated image of the ‘founder’ continues to hang on the survival of the NDC, like the sword of Damocles. No matter what nomenclature one adopts to describe the NDC, one thing is certain: the group is made up of what can be described as political hermaphrodites, whose very nature threatens the unity of the party. A hermaphrodite is an animal or plant having both male and female reproductive organs. It can change its designation without any prompting. By political hermaphrodites, I mean political opportunists with no abiding principles or doctrines to sustain their party. NDC members therefore have questionable allegiance to their party (especially when it is in crisis), and are consequently unable to grasp at themes that promote unity within the party. Personalities, rather than principles are the abiding faith. Hence, upon losing political power, the party began to tear up at the seams. The ‘founder’ of the party Jerry Rawlings continues to bestride the NDC like a colossus, and attempts to introduce meaningful reforms into the leadership structure of the party by people like Dr. Obed Asamoah seem to have ossified the division of the party into the Rawlings wing; and the Obed Asamoah wing. And, into this milieu is stuck Dr. Evans Atta Mills, the party’s presidential candidate (and elected leader) for the 2004 elections.
Unless Dr. Atta Mills is able to unite the fractious group, he may as well kiss any thought of putting up a credible electoral fight against a well-nouri shed NPP in 2004, good-bye! Flight-lieutenant Rawlings can no longer ridicule talk of a fractured party, as he sought to do when this writer first pointed out the emerging damaging fratricidal struggles within the party in December 2000. Nor should Ghanaians jubilate over the misfortunes of the NDC. A credible democratic political environment must need a well-established opposition party to serve as check on political incumbency. The NDC remains, even in its limping mode, one of the two best-organized, better-financed political party in Ghana. Should the NDC atrophy and disintegrate, the fear of a democratic one-party state may become a reality. That may not augur well for a responsible democratic and responsive government. Hence, rather than engaging in sophomoric antics such as meaningless demonstrations, and plebeian tactics as NDC parliamentarians wearing mourning cloth to parliament to dramatize what they viewed as ‘worsening’ economic conditions in the country; the party must sit down and solve its internal problems in order to become the potent political force, that one hopes for it. Whenever the (P) NDC claims to have the panacea for economic development, memories of their 20-year woeful record hits Ghanaians smack in the face!! It used to be that political demonstrations of any sort by the opposition or any aggrieved group, created panic in the government and the nation. In some instances, demonstrators were beaten and shot at; or such demonstrations were banned by the ruling regime. What a difference true democracy makes! The sight of the police protecting and shepherding the demonstrators is a clear indication that Ghanaians have matured in their politics; and importantly, the rule of law and its concomitant freedoms are firmly taking root in our country. As Article 21 Section 1 (d) of the Constitutions affirms: All persons shall have the right to– “freedom of assembly including freedom to take part in processions and demonstrations”. Political demonstrations by the citizenry is a healthy democratic prescription; and it provides further proof that Ghana is truly being ruled by a political party that sees variation in political discourse as a source of strength rather than of weakness. The NDC just exercised its constitutional rights. One expects the NDC to show similar restrain in addressing its internal problems. Acts, such as the beatings and insults meted to some party members at the NDC congress held at Legon last year represent damaging stain on the party. The NDC must remember that in a political environment where everybody thinks alike; nobody thinks much. For its part, the governing NPP treated the NDC demonstration with calculated constitutional contempt. Dan Botwe, the party’s Secretary-General described the planned demonstration as “a demonstration of shamelessness and [sic] puddlism.” And to drive home the point that the NPP government felt neither intimidation nor constrain at the planned demonstration, president John Kufour left Ghana for Mauritius, on the eve of the demonstration! Serious economic matters of state required that he traveled to promote Ghana as a healthy environment for investors, tourists, and businessmen alike. The peaceful demonstration, and the government’s benign contempt for the demonstrators and their misguided message must confirm to would-be investors that Ghana is far ahead in positioning herself as the beacon of democracy and tolerance in the sub-region. Views expressed by the author(s) do not necessarily reflect those of GhanaHomePage.