The Origin, Meaning And History Of Otumfuo Hia Stool 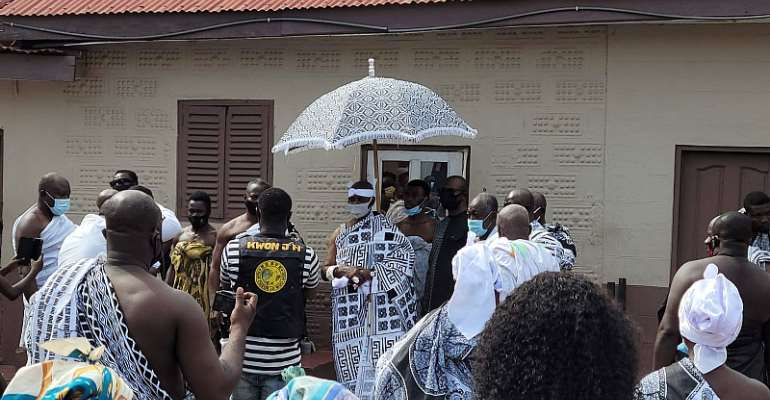 The word or title HIA/HIAHENE has been in the news lately. That’s attributable to the choice of Dr. Oheneba Boachie-Adjei, as the successor to Ɔheneba Agyeman Atwerebuoanna IV, as Hiahene by the Kwabere Botantia Otumfuo HIA Stool elders.

Like his predecessor who was an accomplished International Economist, Dr. Oheneba Boachie-Adjei comes to the Hia Stool with stellar qualifications. He spent years as Professor of Orthopedic Surgery at Weill Cornell Medical College and Chief of the Scoliosis Service at Hospital for Special Surgery (HSS), as well as operating a successful private Medical Practice in Manhattan, New York City, and performing around the world. In 2012 he established The Foundation of Orthopedics and Complex Spine (FOCOS, a non-profit organization); and additionally set up an ultra-modern 50-bed specialty facility to provide services to adult and pediatric patients in need of orthopaedic care at Pantang, in Accra.

His professional, academic, and intellectual success; coupled with his family and traditional pedigree, culminating in his enstoolment as Otumfuo Hiahene, has made the HIA Stool a subject of current interest.

No; HIAHENE does not mean, nor imply someone who takes care of AHIAFUO (people in poverty). Let’s retire that belief, notwithstanding the fact that the Twi language word “HIA” also means being needy or being poor. There is no correlation.

The HIA STOOL was created by Opemsuo Osei Tutu I in the very early part of his reign as Kwamanhene in about 1690. Osei Tutu was enstooled as Kwamanhene upon the death of Obiri Yeboa, who died from injuries sustained in battle against Kyeremɛ Sikafuo, the Chief of Domaa, then located in the present-day Suntresu area near Kumase.

With the assistance of his Spiritual and Political Adviser Okomfo Anokye, Osei Tutu avenged the death of his predecessor by defeating and killing Chief Kyeremɛ Sikafuo of Domaa Suntreso. Following that victory, Osɛi Tutu reorganized the military and administrative set up bequeathed by his predecessor.

A less magnanimous person would have cut Obiri Yeboa’s men adrift. But not Osei Tutu. Being a man full of compassion, and being politically astute, Osɛi Tutu created new positions for the sons of his predecessor. One of Obiri Yeboa’s sons Saben Panin (Saben the Elder) was enstooled as Akyɛmpimhene.

Saben Panin was perceived as not having been sufficiently supplied with the weaponry to defend his father King Obiri Yeaboa in the battle. That need was taken care of with the creation of the AKYEMPIM Stool. Akyempim in the Twi language means “a thousand shields.”

With adequate supply of weaponry, Oheneba Akyɛmpimhene lead the AHENEMA (sons of the King) in protecting their father. A new military/administrative wing (Fekuo) was created called KYIDOM or Rear Guard headed by the Akyɛmpimhene to ensure success. After the creation of the Akyɛmpim Stool for Obiri Yeboa’s son, Osei Tutu decreed that in the event the Stool became vacant, Ɔheneba Owusu Afriyie (Osɛi Tutu’s son) must succeed. Therefore, Akyɛmpim Stool is known as Saben Panin and Afriyie Stool.

Osɛi Tutu was not done. He created a new Stool for another of Obiri Yeboa’s sons called Sabin Kumaa (Sabin the Younger), because Ɔpemsoɔ Osei Tutu and Ɔkomfo Anokye decided that it was ‘essential and indispensable’ for the younger Sabin to serve in his administration. The new Stool was called HIA Stool to underscore and signify Osei Tutu's need and importance of Sabin Kuma’s contribution in the service of Kwaeman. In this context, the Hia Stool signifies its unique and indispensable role for Osei Tutu, Kumaseman, and by extension Asanteman. Hia, therefore, bears the responsibility of being indispensable.

In the Asante language, “I need you” translates as “Me Hia Wo.” In this way, the politically astute Osɛi Tutu Kofi, Kwaemanhene succeeded in blunting any resentment that Obiri Yeboa's clique must have entertained because Ɔsɛi Tutu had appointed his Stool Carrier (Akonwasoani) Kwame Amankwatia (Oman Akoa Tia) as Ɛkontihene, by empowering him as the principal military commander; and administratively, the deputy leader of Kwaeman.

It was this sort of political acumen and strategic skill that enabled Osɛi Tutu Kofi to unite other independent Twi-speaking States under Kwaeman leadership. And, it is this same unique leadership style that also enabled Osei Tutu to unify the various Aman or States like Dwaben; Mampon; Offinso and Bekwai, to successfully fight for their freedom from Dankyira in 1701, to become what we know as ASANTEMAN.

The Hia Stool is the type known in Asante governance as AHENEMA DWA, a Stool reserved for the sons (and grandsons) of Chiefs. It is also called “Mmama Dwa" because inheritance is Paternal or through the Father. It is therefore not in the category of ABUSUA Royal Stools which is the norm in Asante and most of AKANDOM. The Hiahene serves his father, Otumfoɔ Asantehene as the number three in the Kyidom Division headed by his senior brother Ɔheneba Akyempimhene. Otumfuo Akyeamhene who also serves as Nsuoasehene (Nana Nsuoase Poku) is second in command. The Nsuoashene also commands the Domakwae Nifa (one of the Right and Left military battalions) of the Kyidom, as Otumfuo Domakwaehene.

A noted and oft-cited military victory for the HIA Stool occurred in the year 1718. While Asante under Okatakyie Opoku Ware I was on the battlefield in Akyem Kotoku in the present Eastern Region of Ghana, Abiri (Ebiri) Moro the King of Aowin attacked Kumase, ransacked the capital and other parts of Asante such as Sawia. He killed many people and captured the female royals left behind. It was a disaster. When the news finally reached Opoku Ware on the battlefront in 1718, he dispatched Asante fighters led by Baafuo Bantamahene, Konti Fekuo, and Hiahene Oheneba Effa Yamfuo who successfully pursued killed the Aowin Chiefs, and freed the royals. The Aowin fled and settled beyond the River Bia, with a new capital (Ahenkro) called YENKYIRI (Yenkyi/Enchi).

And, it was after his exploits in the Abiri Moro War of 1718 that Oheneba Hiahene was rewarded with additional lands that largely belonged to the Aowin King. The towns of KUNSO, Wiowso, Mpasaaso, Hwibaa and others in Ahafo Ano South (Asante Region) were founded and settled by people from Botantia and other nearby areas in Kwabre. Oheneba Hiahene was also given additional responsibility as the protector and guardian of the female royals (including Wives of Otumfuo Asantehene) because he successfully freed the female royals from captivity. Oheneba Hiahene swears the Oath of Allegiance to Otumfuo Santihene with Mponponsuo Afena.

NOTE: In 1718, Asante fought against Ofosuhene Apenten of Akyem Kotoku, because his sub-Chief, the Adeneduahene Akrasi Kɔdeɛ fired the unmentionable shot at Osɛi Tutu Ɔpemsoɔ in 1717 on the banks of the River Pra near the town of OBOGU, Asante Akyem. Kotokuhene Ofosuhene Apenten was defeated and killed. Akyem Kotoku State became a tributary of Asante from 1718 to 1831.