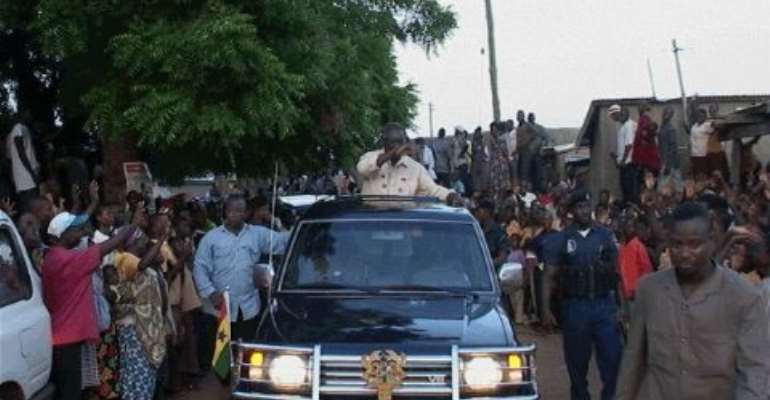 Henry Kissenger says of the central dynamism of governing as: "A Statesman's duty is to bridge the gap between his vision and his nation's experience. If his vision gets too far ahead of the experience, he loses his mandate. But if he hews too close to the conventional, he loses control over events" Is our government in control of events in Dagbon, in the words of Bikome of New Jersey, by use of force not by force of argument? Is President Kufuor in danger of losing his mandate over the people of Dagbon by his slavish acceptance of the conventional in waiting for an all-clear signal from the same Security Forces that failed miserably in averting the carnage of Dagbon, before setting foot there to console the family of the deceased? How come the Vice President, Aliu Mahama, a son of Dagbon, has not yet played a frontal role in clearing the way to his hometown for the President of the land? Admittedly, the Abudu-Andani conflict is age old. Should it take ages, though, for Vice President Aliu Mahama to help President Kufuor, beat a path to the hearts of Dagbon? Shakespeare told us that cowards die many times before their deaths but the brave die just once because they know that death, a necessary end, will come when it will come! Bravery informs vision, in situations such as we see in Dagbon! The Wuaku Commission has presented its report to government and identified two people who have been arrested on the orders of the Attorney General, as the killers of Ya-Na. The Dagbon loss of Ya-Naa, painful as it is, has not stopped social, political, commercial activities amongst others in and around Dagbon.. The Government's curfew though, is in place and it keeps being extended every now and then. When it is to be removed totally is anybody's guess. Former President JJ Rawlings bravely visited Dagbon and paid his condolence to Ya-Na's widows. This was at the time of Mumuni Bawumia's funeral. Reports indicate that the whole township went festive on hearing about the presence of Rawlings. No bows or arrows, knives or clubs or swords were unsheathed. The people came out expressing love, not war, to their august visitor. Former Vice President Atta Mills and Former Finance Minister Kwesi Botchwey, both Presidential Candidates have recently concluded a whirlwind campaign swing through Dagbon. On each occasion, the people were reported to have received them with open arms and with fanfare. Again the people came out expressing love not war, to their honourable visitors. A report filed on Ghanaweb by Dr. Kofi Ellison who is reputed to be an employee of the United States State Department now on visit to Ghana, graphically described the euphoria of the people who went on bicycles and by other means on an 18 mile trip to Kumbuugu from Tamale, when Prof. Mills hit town! Yet again, the people were full of love not war! As leader of Ghana, President Kufuor's vision must be circumscribed by the experiences of the nation. Ghana custom and usage allow for bereaved families to be consoled in a timely manner. By now, whether with a high profiled visit or by a low key out of the public glare visit, President Kufuor should have gone to Dagbon to console the family of such an important King, ahead of any official mourning to be sanctioned by government. This would have helped assuage the sorrow of the bereaved and the healing process would have been far advanced. Does anyone recognize the central dynamism of governing President Kufuor is adapting to the Dagbon case in particular and to Ghana as a whole? December 2004 is looming large!