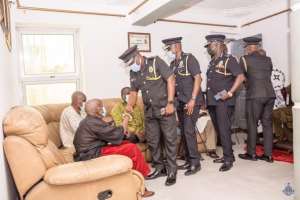 A delegation of the Ghana Police Service on Friday, October 22, 2021 visited the families of officers involved in the accident on the Walewale-Bolgatanga road to mourn with them.

The fatal accident which happened on the Walewale-Bolgatanga road on Thursday claimed the lives of two police officers and left three others in critical condition.

Saddened by the news, a delegation from the Ghana Police Service headquarters in Accra has today travelled to the North East Region to sympathise with the families of the victims.

Having led the delegation, the Director-General of Administration at the Ghana Police Service, COP Mr. Christian Tetteh Yohuno assured the bereaved families of the Police Administration’s maximum support in these trying moments and beyond.

He also assured the families of the injured Police officers of the best medical care for their speedy recovery.

He also stated that some support systems had been instituted to cater for the psychological needs of the families.

The Director-General of Administration was accompanied by some members of the Police Management Board and other Senior Police Officers.