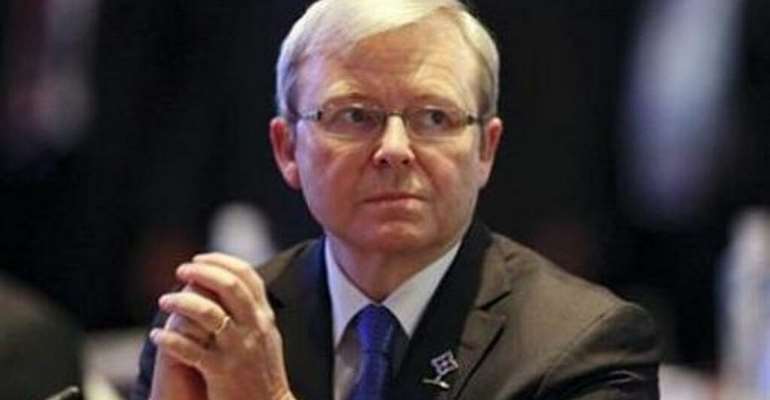 Former Australian prime minister Kevin Rudd has slammed the ongoing submarine dispute with France.  In an interview with RFI's Australia correspondent he said he believed that the crisis was generated as part of a domestic political agenda.

He also said he believed that the current prime minister Scott Morrison, also sees Australia's relationship with France as expendable.

This, he said, is likely to be a mistake in the long run, as the decision to scrap the existing nuclear deal and enter a different deal with the US and UK assumed that when it comes to servicing the submarines, the US will do it.

However, he warned that Australia and the US would not always agree with each other over all kinds of policy issues so it is likely that this decision will come back to haunt Australia in the future.

Repairing Trust
Meanwhile, the top diplomats of France and the United States said Thursday that repairing ties will take time as Paris demanded action to assuage its anger over the cancellation of a massive submarine contract.

French Foreign Minister Jean-Yves Le Drian, after days of giving the cold shoulder, met on the sidelines of the UN General Assembly with Secretary of State Antony Blinken on the allies' worst crisis in ties since the Iraq war.

France's top diplomat told Blinken that US President Joe Biden's telephone conversation a day earlier with his French counterpart Emmanuel Macron had been the start of a process of repairing trust.

"He recalled that a first step had been taken with the call between the two presidents but underlined that resolving the crisis between our two countries would take time and require actions," a French foreign ministry statement said.

France was infuriated when Australia last week canceled a multibillion-dollar contract for French submarines, deciding instead that it needed US nuclear versions amid rising tensions with China.

Blinken, a fluent French speaker who grew up partly in Paris, appeared remorseful as he spoke to reporters later in the day following the closed-door, one-hour meeting at France's UN mission.

France's Naval Group said that it will soon send a detailed invoice to Australia for canceling the contract.

alliance with Washington and London.
Blinken promised to work closely with France in the US strategy toward the Indo-Pacific, seen by the Biden administration as the paramount priority amid the growing assertiveness of China.

Other European nations including Germany voiced solidarity with France, saying that the US move went counter to Biden's push for closer relations with allies.