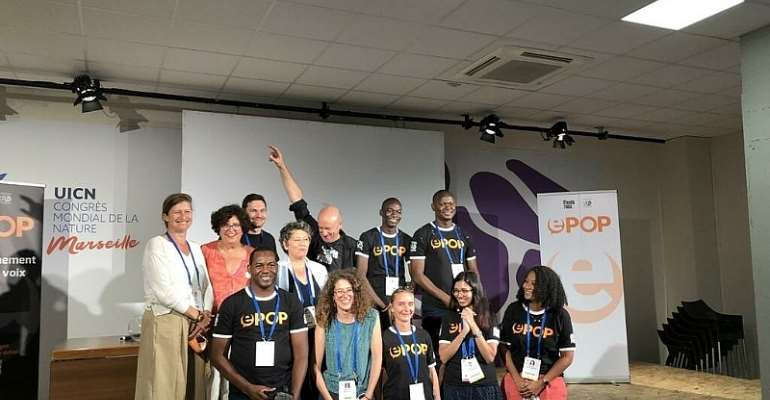 The four winners of the 2021 ePOP short video competition, sponsored by RFI's Planète Radio team, have been announced. The initiative gives voices to remote populations from around the world, bringing environmental issues into the limelight. This year's winners, all from the African continent, were also invited to participate in the IUCN World Conservation Congress in Marseille.

In partnership with the French Research for Development Institute (IRD), the ePOP (Participative Observers Project) short video competition, put in place by RFI's Planète Radio, focuses on climate change, told by the people it affects.

From deforestation, land and water pollution, to the management of natural resources and loss of livelihoods, the ePOP challenge asks citizens to go out into their communities and discuss the situation and point to the difficulties they face.

This year's edition attracted more than 300 films in 45 languages, and participants were mentored by French urban poet Grand Corps Malade.

In the three-minute videos posted on epop.network and on Facebook and Instagram, people confide their feelings and question scientists and experts from around the world. To federate its network, ePOP has set up workshops in different countries to facilitate the exchange of skills between young ePOPers.

This year's Grand Prize went to Gildas Ignace Razafimampionona from Madagascar, for his video Le salaire de la soif (The Wage of Thirst).

Le salaire de la soif tells the story of Sambeto, a young orphan who sells water to pay for school and to survive.  Due to a three-year drought, the village's river has run dry, and Sambeto must dig 10 times the number of small wells as he did before. His income has been depleted to almost nothing. He can no longer go to school.

The award was presented by RFI Director Cécile Mégie and IRD Director Valerie Verdier at a ceremony on 6 September, which was hosted by Planète Radio Director Max Bale, and ePOP Community Manager and Network Coordinator Gaël Flaugère.

A visit to Marseille
The RFI Club prize 2021 was awarded to Abdoul Salam Derra, from Burkina Faso, for his short film called Dans la Forêt Disparue (In the Vanishing Forest). The video focuses on Sanfo Isouf, who lives in the in the rural commune of Saaba and remembers a lush forest where there was drinking water, and trees that served as a shadow to learn his school lessons. Today the area has become a desert.

The Young Female Producer Award went to Véronique Missinhoun from Benin for the film When Women Organize for Change, a collective which raises money to better manager water resources.

While the Emergency science Award based on this year's theme Water, Rivers, Oceans, was handed to Hadama Diakité from Mali for the film Gold at any Price -- a cry from the heart to stop the pollution of rivers due to abusive gold mining.

The ePOP laureates won an all-expenses-paid trip to France and ePOP video kits, including microphones, tripods - and of course, ePOP tee-shirts. This year's winners were able to attend a number of conferences and workshops held during the week-long World Conservation Congress in the southern French city of Marseille earlier this month.

Due to Covid-19 and travel restrictions, the 2020 ePOP laureates were also invited this year, including the first anglophone to win an RFI Club prize: Adita Prithika Subramanian, the president of the RFI Agnichiragu Phoenix Club in Tirupur, India.

You can watch the 2021 ePOP Awards Ceremony on the ePOP Facebook page.