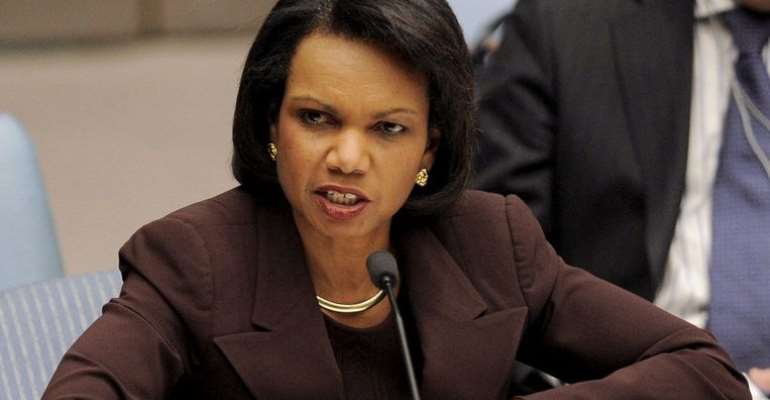 I am just coming away from the videoclip of a television interview that former United States’ Secretary-of-State Condoleezza Rice granted, in which President George W. Bush or Bush 2’s National Security Adviser, at the time of the Al-Qaeda-engineered and orchestrated World Trade Center (WTC) catastrophe, wistfully lamented what she claimed to be the extremely premature decision by the Joseph Robinette Biden, Jr’s Administration to summarily and unilaterally withdraw US forces from Afghanistan, thereby ensuring the sinister return to power and control of this predominantly Islamic nation of some 40 million people.

It would be recalled that the United States, under the tenure of the Younger President Bush, invaded Afghanistan in the wake of the Sept. 11, 2001, apocalyptic destruction of the Twin-Towers of New York City’s World Trade Center, the Pentagon or the United States of America’s Department of National Defense (or Defense Department), and the crashing of a civilian passenger plane or airliner into a Pennsylvania cornfield by terrorist hijackers recruited by the Osama Bin Laden-led Al-Qaeda Islamist terrorist organization. The WTC conflagration resulted in the deaths of an estimated 3,000 people from all walks of life and nationalities.

Almost a citizen from every one of the 190-plus nations recognized by the United Nations’ Organizations (UN) lost their life in the WTC Apocalypse or Dantesque Inferno, including 4 officially identified Ghanaian citizens. There may very well have been more than the 4 Ghanaian citizens officially reckoned to have perished in the WTC catastrophe, if also because the relatives and family members of some of the victims might have avoided coming forward to make any financial claims for the quite well-founded fear of being marked down for the possibility of detention and/or deportation for living in the United States without the proper or requisite documentation, as it were. And this was very likely the case with the relatives of victims from other countries, especially improperly documented residents from Third-World countries.

Consequently, as I often tell my students when the painful subject of the WTC Tragedy comes up in class, there actually may have been anywhere between 4,000 to 5,000 people who lost their lives in the Twin-Towers of the World Trade Center and its environs on Sept. 11, 2001. Whatever the real case scenario may be, at any rate, it is all too commonsensical to surmise that the specific number of people who perished on that fateful day may never be known, even by the use of the most sophisticated or advanced biotechnology. Still, what most intrigued me about the Condoleezza Rice Interview, as captured by Microsoft’s Office 365 Newsfeed on my computer screen, was the deafeningly unspoken fact that when the seismic and landmark decision was made by the recently democratically and popularly ousted President Donald John Trump to withdraw American troops from Afghanistan, absolutely nobody that I know of, including Ms. Rice, who now waxes both clairvoyant and pontifically self-righteous in the wake of what many pundits insisted was the botched US withdrawal from Afghanistan, hinted at the fact that any effective or definitive attempt to plant and successfully nurture democratic political culture was bound to take far more than the 20 years that the United States’ Government took control of Afghanistan and almost completely drove out the leadership of the primitive Islamist theocratic institutional apparatus of the Taliban and the leadership of the latter political machinery.

In her television interview, the longtime Stanford University, California, Senior Administrator, highlighted the fact that the United States has militarily occupied South Korea for some 70-plus years, because Washington did not want to see that “Crazy Man” of Communist and Totalitarian North Korea sweeping down South to impose his ungodly and civically and morally unhealthy rule on our freedom- and democracy-loving allies in Seoul. Very likely, Washington never envisaged Afghanistan within its counter-imperialist periscope or context of Cold War political culture. On the latter count, it goes without saying that it was exclusively the single-minded and unilateral objective of flushing out the Al-Qaeda architects of the WTC Apocalypse that took American soldiers into Afghanistan. Nothing more and nothing less.

For me, personally, however, what boggles the mind is why if she really cared so much about the Afghan people, especially Afghan women and children, which well appeared to be the focus and purview of Prof. Rice, had the former National Security Adviser and Secretary-of-State, in the wake of the resignation of Gen. Colin L. Powell, not reached out to Mr. Biden, when the President decided to follow up with the pre-negotiated decision by his predecessor and popular national sentiment against continuous US military occupation, to have American troops completely and effectively withdrawn from Afghanistan? It well appears that looking on wistfully and belatedly, as Afghan women got violently pushed back to the horrific status of medieval domestics and the veritable properties or even chattels of their male sociopolitical and cultural overlords, Ms. Rice has bitterly regretted that she had not opportunely and promptly stepped up to the proverbial plate to ensure the safety, civilized existence and inviolable survival of these Afghan women and their children.

What makes her dilemma seem even more excruciating is the fact that both Dr. Rice and former President Trump, who officially began negotiating with the Taliban leadership for the complete and effective withdrawal of American troops from Kabul, are bona fide and high-powered members of the US Republican Party with fundamentally identical ideological stripe and suasion.