NDP: Akufo-Addo’s Agenda 111 – The Biggest Scam of the Century

Announcement of 111 hospitals, Questions for the President
By NDP Ghana
Critics 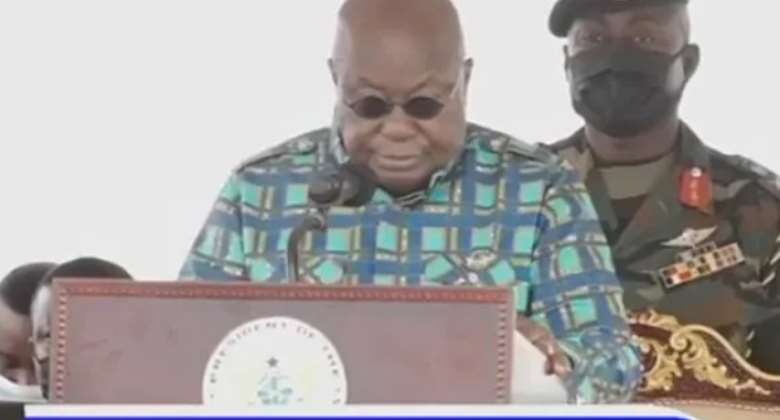 These supporters have attested to the fact that it is time Akufo-Addo steps down. They agree that never in the history of our nation have we experienced this degree of incompetence coupled with sheer kleptomania.

Kleptomania means the inability to resist the urge or temptation to steal items.

In our case the Rawlings Constitution created a situation by which one person decides singularly about the fate of all. Nigerians are suffering because, despite the federal nature of their constitution, one president decides on the fate of 220 million people.

We in Ghana should resist this form of dictatorship. One person sitting in Accra as the head of state enjoys lavish life at the expense of the many.

This proposed Agenda 111 is fake and must be rejected. Once more, the people of Ghana should praise Captain Smart, Mr. Yeboah and Mr. Barker-Vormawor.

#fixthecountry is a clear message telling the President “Dear Mr. President, your previous work has been poor, please kindly improve upon it”.

The Minister of Information is quoted to have said the following:

“The construction of the 111 hospitals will lead to Ghana becoming a centre of medical excellence and a destination for medical tourism in the West African sub- region.”

Dear readers, President Nana Akufo-Addo himself is quoted to have said that Ghana should be the centre for medical care in West Africa by 2030. This statement is fake and at the same time taken out of context. Some two or three years ago, I, Dr.

Edward K. Poku, sent a letter to the sitting President of Ghana, thanking him for the

memorial services that he conducted for the late George Floyd. I did consider this action as appropriate and necessary for black unity.

From 2003 to 2011 I worked as a doctor in the UK, among other places for the Interior Ministry and for the Ministry of Justice.

One fine day, while having lunch with an English colleague, a discussion about a place of excellence and health tourism in Ghana popped up. I told him I was fascinated by the magnificent edifice built by the previous President of Ghana, Mahama, for the University of Ghana. Coincidentally I had seen a picture of how black American patients were being treated by dentists in the USA. This shocked me and led me to write a letter to our present President about the creation of a centre of excellence for health tourism. I informed him that we will require about 50,000 doctors, 20 percent of which should be specialists and that we would have potential patients of 350 million West Africans. I suggested that in all these capitals of West Africa, Ghana should build hospitals, catering for the patients of the various countries. That means we have a doctor population of 50,000 poised to treat 350 million people in West Africa. The training of these 50.000 doctors would require 5 years.

To make the situation easier I suggested we have our own pharmaceutical industry producing local essential products. It was suggested that these hospitals should be located in each West African country. Transportation of patients between the various countries should be by air or by sea. This was my idea to the President and I asked him to make me and my son Reginald managers of this would be beautiful project. I added further that most people in the black world, especially from the USA, Mexico, Brazil, Colombia, Haiti, West Indies, and many other places should follow what we have started before the so-called year of return.

To my surprise, I never had any reply from our President. I pursued the matter further by sending him a medical catalogue from a German company, Hartmann. This was Hartmann’s 200 anniversary catalogue. It was the state of the art medical products.

Once again, to my surprise and up to today I have not received any acknowledgement of the receipt of the parcel. I pursued the matter still further by sending him Glaxo Smith Kleine’s protocol of vaccinations from infants to elderly people. Still no reply.

With regard to his own health a patient of mine sent me a picture of my own President caught sleeping while a meeting was going on in Moscow. I sent this picture under strict seal and recommended a treatment. Still no reply.

I find it therefore extremely shocking after all these years now to prove that he is bent on fixing the country as demanded by the young people of Ghana, for self- survival and hypocrisy he declares Agenda 111 to the public as if it is his own idea. There is nothing this man won’t steal. This man cannot be trusted.

I could not believe my eyes when I read about the new Agenda 111.

The German Branch of the National Democratic Party of Ghana wish to announce the springing up of supporters of #FixTheCountry all over the world.

This movement is the sign of Ghanaian people’s determination to fight against corruption. Never in the Nation’s history have we witnessed such a corrupt and deceitful government like Akufo-Addo’s government.

They constantly lie to the people in their quest to steal. Our people have never experienced this degree of kleptomania. I prophecy that Akufo-Addo might ultimately loose his citizenship as a Ghanaian and probably move to France, a country he loves so much.

We have just been informed by one of his ministers, one Mr. Kojo Oppong Nkrumah, about a loan of around 100 million US-Dollars for the construction of 111 hospitals. How the minister of health came to this sum for the promised hospitals is unknown. The announcement at this time is equally strange.

I suspect the intention is to tell the public that after all said and done something will happen to save the ailing health system. But the health system requires a coherent health policy. This is non-existent in Ghana. All they do is project construction, so the motive is clear: to make money.

At a press conference the minister of information shamefully declared the following to the public:

no clue of what type of hospital is envisaged to construct. Just as much as he lied to the people of Ghana about the status of Professor Frimpong-Boateng. He told the public that the Professor is a world acclaimed scientist, but he is rather a cardio- thoracic surgeon. This pronouncement is purely a political gimmick ! Poor man, he simply cannot cope and my apologies to my niece Mrs. Rawlings, who allegedly remarked that this man is not a lawyer. Whether this is true or not, is not the question, the problem is how does this man complete his 4-year term. Impossible. The English have a saying, it states “Clouds are the signs of rain.”

Meaning we all witness during the vetting how pathetic the minister of health was. He was helplessly incompetent. Mr. Kwaku Agyeman Manu’s performance was simply disgraceful probably because the government had no policy about health delivery.

This minister claimed 85% of Ghanaian doctors are located in Kumasi and Accra! If so, how do come to build 111 hospitals who should man them?

I have listed the following questions for the President of Ghana:

Each of the above-mentioned disciplines requires specially trained doctors, nurses, and equipment, which we don’t have.

We demand in detail information about the proposed hospitals, what they are for and who is to man them, since the health minister under oath stated that we have manpower problems.

Is this agenda III the true biggest infrastructure or another paper tiger?

I am a consultant physician specialist trained in Germany,

We demand the following answers from the President:

It is not proper to inform to cheat our people with this cheap propaganda and half- truths.

Above all the people of Ghana deserve to be presented with your parties’ coherent health policy in writing within 2 weeks.

Should the President be found wanting in his answers, we must force him to resign. The people of Ghana are not fools. We have had enough.

I appeal to all organisations namely the Muslims, the Christian Council, Asantehene Nana Osei Tutu, Captain Smart and Mr. Yeboa of #FixTheCountry to protest this propaganda to fool our people.

Because the Agenda 111 does not help to solve the health problem facing us. At the moment people suffering from the results of road traffic accidents, people with breast cancer, prostate cancer and other ailments have to be sent out of the country or stay in Ghana to die. We have serious health delivery system problems in this country that can only be solved by health specialists and not by politicians.

Incidentally we have not heard about a genuine bidding process for Agenda 111. We are informed that Ghana is a heavily indebted nation and that our debts are increasing by day. Can the President then tell us where the money comes from ? The People of Ashanti do not want to be dictated to about our health needs. The President must cut it out.

The President has two weeks to answer our questions, or else there will be very effective passive resistance. A strike where all people will stay at home.

We should resist any constitutional reform from him. The people must make their own decisions about their future. Rawlings’ constitution was not a constitution – it was a conspiracy against Ashantis.

The conversation that I had with the late Nana Opoku Ware, my grandfather, will be at the right time disclosed to the Ghanaian public.

I wrote the following letter to the at that time newly elected President Akuffo-Addo. It goes as follows:

‘The ethnic differences in our society must be accepted as a reality and all our actions should not ignore this fact. I expect your new administration to strengthen the institutions and structures in the regions into full blown regional governments, each managing its own affairs.

Reasons: Ashanti is a sovereign nation within the State of Ghana. Ashanti confederation is real and in order to cut off our wings this constitution makes it possible for Northerners to invade our nation to the extent that the once garden city of Kumasi has been rendered into a filthy crime-infested city. It is our human right to ask for a reversal of this unacceptable situation which has led to the murder of an important Ashanti chief, increase of armed robbery and has rendered the country virtually impossible to live in peace there.

Recently it has come into our knowledge that instead of the present President solving this problem he has sent one Minister Botwe around to various Regions of Ghana to lobby for the continuation of the status quo.

We the people of Ashanti reject this action and demand a reformed constitution that restores our nationhood.

We therefore appeal to the present government to listen to the will of the people, reform the hateful constitution, thus preventing a possible civil war.

We expect him to keep to his promise of conducting a referendum to this effect.

Your ban on radio Ada unjustifiable, affront to press freedo...
18 minutes ago

Doctor who was wrongfully dismissed, reinstated by GHS after...
28 minutes ago