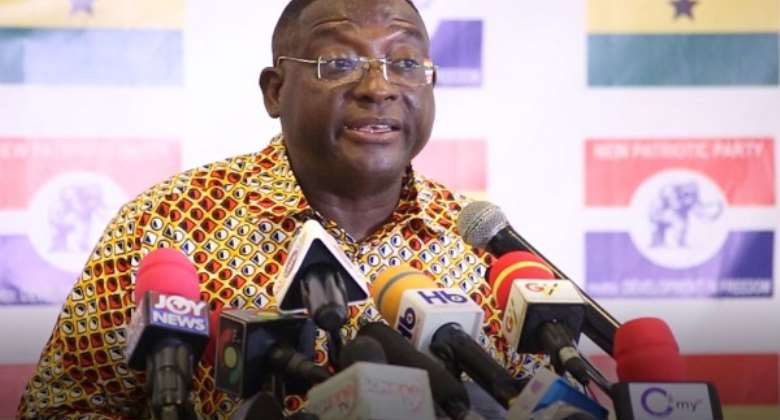 “For open political purposes founded on the spirit of non-performance and incompetence, the NDC wants an initiative that is set to benefit millions of Ghanaians stopped just because it threatens their assumptions of the 2024 election”, the former Adentan MP told journalists at a press conference on Friday, 20 August 2021.

“The NDC sees Agenda 111 as a game-changer to defeat their archaic model of regime change every eight years. They are afraid we will break the eight. Agenda 111 complements major reforms in the health sector”, Mr Asamoa noted.

The NPP’s reaction comes on the back of a comment by former President John Mahama that the project is an afterthought with no transparency as far as funding is concerned.

The government, on Tuesday, 17 August 2021, launched the project, which aims to construct 111 hospitals across the country.

Laying the brick for the project to begin on Tuesday, 17 August 2021, at Trede in the Atwima Kwanwoma District of the Ashanti Region, President Akufo-Addo said: “So far, sites have been identified for 88 of the 111 hospitals and after cutting the sod, work on the other 87 sites will also commence today.”

“The acquisition of the remaining 13 sites will be completed shortly for work to begin”, he noted.

But speaking on Bolgatanga-based URA Radio, as part of his thank-you tour on the same day, Mr Mahama said the government has increased the public debt but has no infrastructure to show for it.

He said the monies borrowed have gone into consumption and the government realising that Ghanaians are asking what the monies have been used for has decided to draw up the Agenda 111 plan.

He said, four years after he left office “you are witnesses to what has happened: from GHS120 billion of total public debt, today, we are almost hitting GHS400 billion public debt and what most Ghanaians ask is: ‘What have we done with that money?’ It looks like most of them have gone into consumption rather than into providing the country with the kind of infrastructure that we need”.

“It’s only as an afterthought that suddenly they realised we must be doing some infrastructure, so, Agenda 111 has been drawn. There’s no transparency [about] how the money is going to be procured and all that”.

“Is it going to lead into more borrowing when we already have a high level of debt hanging around the country’s neck? So, these are things that we could build consensus around if they were prepared to open up and involve everybody in doing so but it doesn’t look like they are prepared to do so,” he added.

Directly responding to Mr Mahama, Mr Asamoa said: “We are not frightened of John Mahama. We know he cannot manage the economy, so, we can’t let him poison your minds because if you’re sitting your somewhere and they keep telling you: ‘Oh, it is bad, Ghana is hard, there is corruption, Ghana is hard’, then, sometimes, you think it’s true. So, we have to speak back.”

CHRAJ investigating 428 public office holders for failing to...
34 minutes ago

Injured persons in Ejura shooting yet to receive compensatio...
34 minutes ago