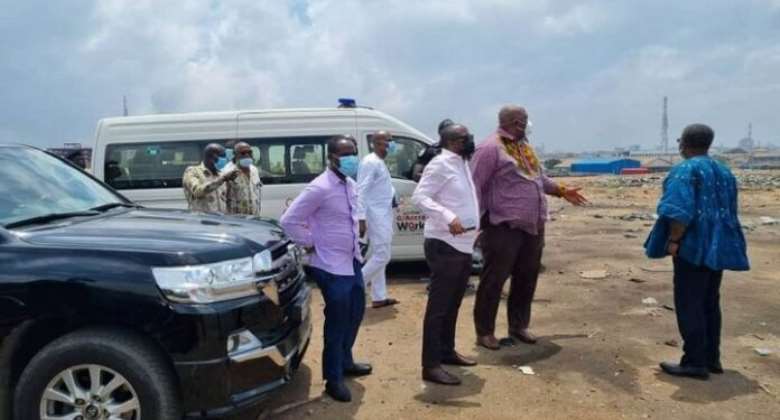 Several acres of the reclaimed Agbogbloshie land in Accra have been allocated for the construction of the Ablekuma Central District Hospital under the Agenda 111 hospital project by the government.

This came to light on Friday after the Greater Accra Regional Minister, Hon. Henry Quartey led a delegation from the Presidency, headed by Dr Nsiah Asare, Health Advisor to the President, to assess a land allocated to them by the Regional Coordinating Council to build the hospital.

According to the Regional Minister, the hospital when completed will cushion Korle Bu Teaching Hospital and also serve over 200,000 residents in the Ablekuma Central, Ablekuma South, Odododiodioo Constituency, and its adjoining communities.

President Nana Akufo-Addo on Tuesday, 17 August 2021, cut the sod for the beginning of Agenda 111, which he touts as the biggest ever investment in Ghana’s healthcare sector.

Speaking at the groundbreaking ceremony at Trede, in the Ashanti Region, President Akufo-Addo noted that the COVID-19 pandemic exposed the deficiencies of Ghana’s healthcare system as the nation has not invested much in that area.

He added that an initial (88) out of the101 sites has been identified for work to begin on the construction of the district hospitals, with the remaining thirteen (13) sites expected to be completed soon for work to begin.

“Each hospital is being constructed at a cost of US$16.88 million, that is US$12.88 million for construction and US$4 million for medical equipment. All the hospitals are to be completed in eighteen (18) months. Work will commence on the regional and other hospitals in the latter part of the year,” he assured.

President Akufo Addo disclosed that the fully equipped state-of-the-art hospitals will have facilities for outpatient services, including consultation facilities for medical and surgical cases, ophthalmology and dental services, a physiotherapy unit, maternal and child health unit, public health unit, four (4) state of the art surgical theatres for maternity, obs and gynae, accident and emergency, and for general surgery and imaging facilities.

“In addition, each hospital will have the full complement of male, female, paediatric and isolation wards. Provision has made for support facilities, which will include a kitchen, laundry, sterilisation department, mortuary, energy centre, maintenance department, and staff accommodation for doctors, nurses, and other health workers,” he said.